During the Second World War 12 Allied aircraft came down in and around the town Oisterwijk. British and American bombers often came down in Brabant on their way back from ‘raids’ on Germany. Many times they suffered damage by anti-aircraft fire ore after attacks by German fighters. These damaged Allied bombers mostly lost several feet of hight per minute despite the fact they were flying without their bomb load. The aircraft usually tried to fly the shortest possible route back to England and because they were slow and most of the time flying on their own, they formed an easy target for German fighters. German (night-) fighter bases were located in Southern-Holland at Gilze-Rijen and Venlo whilst on the aerodrome of Eindhoven the Germans had installed heavy anti-aircraft. Damaged bombers often tried to fly a route between the airfields of Gilze-Rijen and Eindhoven and by doing so crossed our region.

Most of the Allied aircraft that came down in Northern Brabant where British and many tried to crash land safely.For the British pilots, who usually only flew at night, this provided, despite the light of the moon and the use of landing lights, to be an extra difficult task. The American Air force, only just started bombing Germany on a larger scale from 1943, flew by daylight and at a higher and safer altitude. For German fighters that were damaged by allied aircraft there was always the opportunity to land ore crash-land on a German airfield.

During the landings of September 1944 (operation Market-Garden) the supply route by air to the target areas was lying somewhat north of Oisterwijk. Most aircraft were above Oisterwijk and surroundings during the tree very busy day’s of 17, 18 and 23 September. During this period also several American aircraft came down in and around Oisterwijk, and the German anti- aircraft that was located in the agricultural area around Oisterwijk called kerkhove sometimes was the cause of this.

Why did so many aircraft come down in and around Oisterwijk during the Second World War?
The Nevelo sporting grounds on September 13 1944 with German anti-aircraft emplcements in the encircled part. Bottom left the Oisterwijk train station.
(click on photo to enlarge)
Home
TOC
Previous
Next

Also on the former Nevelo sporting grounds in Oisterwijk the Germans had installed anti-aircraft. It was placed there already before September 1944 to cover the railway emplacement area near the leather company where German ammunition was sometimes loaded. German anti-aircraft was also installed at the streets udenhoutseweg and in the kerkhovensestraat halfway 17 September 1944. 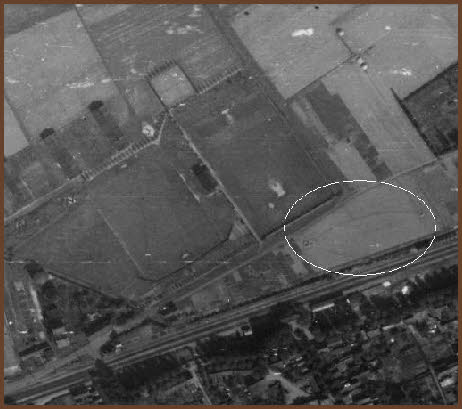