War and Peace in My Backyard

“War and Peace in My Back Yard”, is a book by author Kees Vanderheyden from Canada. Kees Vanderheyden lived in Oisterwijk during the Second World War and immigrated to Canada in the 1950’s. After he read my website Kees send me the following two stories of his memories of the war in Oisterwijk. In the first story he writes about the glider crash in our village and his first encounter with the presence of death inflicted by the war. The second story is about his first encounter with Russian POW’s in our village and his secret Russian friend.

These two stories are surprisingly part of a very nice little book that the author send me as a gift from Canada. In this book Kees Vanderheyden shares the memories of his childhood in Oisterwijk during the summer of 1944, the war games he and his friends then played and his experiences with both the occupying German army with its soldiers billeted in his house, the Allied troops that stayed in our village after our liberation and much much more.

“War and Peace in My Back Yard” by Kees Vanderheyden can be ordered at; 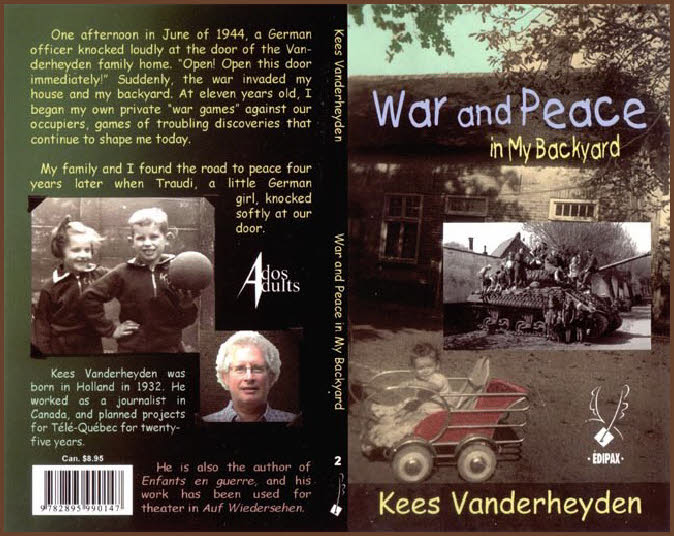 “Five Crosses in the Graveyard”

Two story’s from “War and Peace in My Backyard”

Reviews of “WAR AND PEACE IN MY BACKYARD”

By ex-general Roméo Dallaire, son of a Canadian soldier who participated in the liberation of Holland:

“WAR AND PEACE IN MY BACKYARD”, brought me home, for my mother was a survivor of the Second World War in Europe, more precisely Holland.

Those who lived through this long and murderous war of the twentieth century very rarely talk about it. I always asked myself what the daily life was in a country invaded and crushed under martial law. I often wondered if the children had the right to laugh, play and dream in all innocence, or did the foreign and crushing military occupation take this right away for ever?

I have found the answer to the question that intrigued me for 50 years. It is here, so clear, simple, human and so innocent, in this marvellous book.

“WAR AND PEACE IN MY BACKYARD” is the expression of youth caught in a web of complex and potentially deathly situations. But while one devours each page of this book so full of emotions, one enters literally into the daily life of children looking for joy, adventure and the maximum of innocence. The scenes chosen by the author to introduce us to a childhood that was almost lost, are the more revealing that they show us also the insight of the child.

I have, until today, met with more than 12000 children and adults in the province of Quebec to talk about my war memories as a child. They have been touched and often even transformed. The book is often used by teachers in the classroom to help kids talk and think about war, peace, reconciliation, the role of the family and the resilience of children.

“This book is magic, written with great sensitivity and truthfulness. It offers no moral conclusions or rosy lessons. From the first page to the last, it is filled with lively and colorful anecdotes. Some are suspenseful, and many are very touching.”

“The stories touch us because they have the lightness of youth and at the same time they don’t hide the historical truth that one dares not always tell as an adult.”

Most people have a very limited idea about war. We all hear about battles, military campaigns, soldiers dying. But we know too little about the life of ordinary citizens during wartime and even less about the fate of children. Children’s points of view about war are also very rare. This is particularly true about the worst of all wars: World War Two.

In my book, “WAR AND PEACE IN MY BACKYARD”, I offer a rare view on war lived by a child. For me as a child, war seemed sometimes like a frightening and fascinating game played by adults. The trucks, the tanks, the airplanes, the dogfights, the strong and fearless soldiers, the relative chaos, the trickery to deceive the enemy; they all created a captivating world for the young naive boy. World War 2 brought all this to my backyard in the lovely green Dutch village of Oisterwijk. A German General and his staff occupied our house and so the war invaded my backyard.

Then came the Allies, the Scots and the Canadians, who finally brought the long awaited liberation. But their arrival brought more death and suffering than celebration. My memories show the long way from naive children games to tragedy. Finally came the beginning of real peace and reconciliation, thanks to Traudi, a little German girl. The book is a witness account by a 7-year-old boy at the outbreak of war and an 11 year old, at the end. It is a story of hope.