The Nazi flight of the 442nd Troop Carrier Group

A historical passenger list of the 442nd TCG containing names of a group of prisoners, German officers belonging to the ones mighty and notorious army of Nazi Germany. Members of the 442 TCG 305 TCS transported this group from Metz in France via Sandweiler in Luxembourg to Furth in Germany on 12 August 1945. On this list are also the names of the American crew members onboard C-47A 42-93042 and the names of the German prisoners;

This flight brought them closer to the Neurenberg war tribunal where these men would be prosecuted and trailed in 1946 for the war crimes they committed during WW2.

Hermann Wilhelm Göring (Rosenheim (Bayern), 12 january 1893 – Neurenberg, 15 october 1946) Was one of the most important German politicians and military leaders during the dictatorial regime of Adolf Hitler in Germany.He was the founder of the Gestapo and head of the Luftwaffe. He also was the minister of foreign affairs and minister of the German air force. The loss of the battle of Britain and other losses as in Stalingrad, where the Luftwaffe played the main role cost him much of his prestige, not in the least with Hitler himself. From 1943 Göring was no longer prominent in the foreground, and was more focused on his private business. By the end of the war Göring stored a large part of his looted war treasures in caves with the plan to move them after the war to a safer place or to sell them on the black market.

Ullrich Friedrich Willy Joachim von Ribbentrop Borne as Ullrich Friedrich Willy Joachim Ribbentrop (Wesel, 30 april 1893 - Neurenberg, 16 october 1946) Was a German Nazi-diplomat and politician. He was the minister of foreign affairs under Adolf Hitler from 1938 until 1945. His most important achievement was the 1939 non-aggression treaty with Stalin.

Albert Kesselring (Marktsteft / Unterfranken, 13 november 1885 - Bad Nauheim, 16 july 1960) Was a German general and field marshal from the Second World War.During the war he was the commander of the German bombardment divisions of the Luftwaffe. He is held responsible for numerous terror bomb raids that, in his command, where made by German bombers. Kesselring achieved big successes with his tactical and well thought bomb campaigns. He was decorated with diamantes with his nights cross. Because of his characteristic character and his prominent smile Kesselring was also called the: smiling general.

Alfred Gustav Jodl Bourne as Alfred Baumgärtler (Würzburg, 10 may 1890 – Neurenberg, 16 october 1946) was a German general. He was the Chief Operations within the OKW, Oberkommando der Wehrmacht where he played an important role during the military advance through the Balkans and the Soviet-Union. In January 1944 Jodl was promoted colonel-general. Jodl was present during the staff meeting in Hitler’s HQ in Rastenburg where colonel Claus von Stauffenberg attempted to assassinate Hitler, in which he failed. Jodl was wounded during this attempt but recovered quickly.

Wilhelm Bodewin Johann Gustav Keitel (Helmscherode near Hannover, 22 september 1882 – Neurenberg, 16 october 1946) Was a German officer. He was head of the High Command of the Armed Forces (Oberkommando der Wehrmacht) and a field marshal (Generalfeldmarschall) during the second world war. It was Keitel that dictated the conditions to France for a truce with Germany. After the attack on the Soviet Union (1941), he personally endorsed the orders for German Sonderkommandos (small SS teams) to hunt down all Jews in the conquered Russian areas, and to pick up and then neutralise all local Soviet Communist party leaders and officials. After the failed assassination attempt on Hitler on July 20, 1944, he was a member of the National Council against the suspects of that assassination attempt.

Hans Michael Frank (Karlsruhe, 23 may 1900 - Neurenberg, 16 october 1946) Was a German lawyer, Nazi politician, General of the SS, and one of the major war criminals of the second world war. He was a member of the Reichstag, minister without portfolio, imperial commissioner for the standardization of justice, the president of the international ‘Rechtskammer’ and of the academy of German law, head of the civil administration of Lodz, chief executive of the military area of Posen, West Prussia, Lodz and Krakow, and finally, governor-general of the occupied Polish territories. In 1939, following the German victory in Poland, Frank was appointed as governor general of the now occupied Poland. In that role he was responsible for the repression of, and the murder on millions of poles. He also the one that deported the Polish Jews into ghettos. He was called ‘the butcher of Poland’.

Karl Dönitz (Grünau, 16 september 1891 - Aumühle, 24 december 1980) Was a German admiral and also the leader of the Navy (Kriegsmarine). He became ‘the Reichspräsident’ after Führer Adolf Hitler Hitler. This was the second and final leader of Nazi Germany (01-23 May 1945) after the suicide of Adolf Hitler. He received command over the submarines of the German Navy In 1939. Dönitz knew to upgrade this subsection into the most effective weapon of the Navy. He was a great strategist that inflicted large losses with his U-boats (submarines) on the allies during the second world war.

Kurt Daluege (Kreuzburg, 15 september 1897 - Prague, 23 october 1946) Was of the German SS and during the second world war responsible for the personal protection of Adolf Hitler and other party leaders of the NSDAP. He was appointed SS-Oberstgruppenführer in 1942. 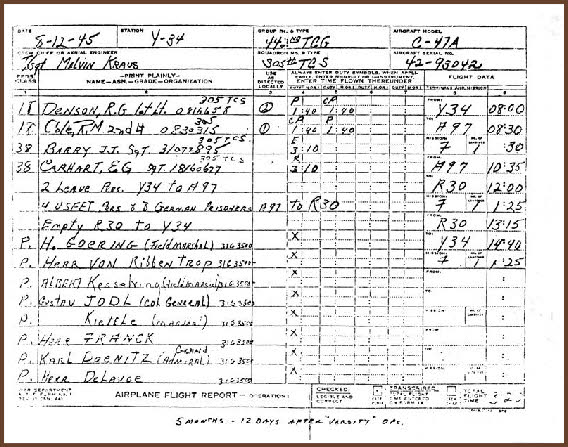