On the 2nd day of Market-Garden the huge Allied armada followed the Northern route to Holland.

After the aircraft again had passed Schouwen-Duiveland and Breda they soon came over Oisterwijk.

Here the Germans were ready to give them hell after they had quickly installed more FLAK batteries in and around the village.

The German crew of one of the guns, a 37mm canon, was able to hit a glider in its left wing hereby disintegrating the wing.

The pilot of the Skytrain tug immediately casted off the tow rope and the glider went down in a spin from an altitude off some 700 feet.

Witnessing the spectacle from a distance the German officer in charge off the FLAK gun at the udenhoutseweg was seen cheering with his hands in the air while the glider went down disappearing beyond his sight.

While first hitting some trees the glider came to rest in a ditch along side the road kerkhovensestraat, a few hundred yards from a FLAK gun positioned close to a farmhouse owned by the van der Sterren family.

The cockpit was totally crushed on impact and the crew inside was killed instantly when the Jeep came right on top of them.

The nylon tow rope was left hanging in a tree standing along side the ditch opposite the road.

At the moment of the glider crash a local farmer driving a horse and cart was just passing on the same road.

The violent crash made the horse run wild and both the farmer, his horse and the cart ended up in the same ditch.

Soon the first residents of the kerkhovensestraat appeared on site to take a look at the crushed remains of the glider.

One of them was the secretary of the Red Cross of which a small post was located in Oisterwijk.

He had witnessed the whole spectacle from a fare distance and immediately had taken his bike to rush to the location to see if he could give aid.

Arriving at the crash location the only thing he was able to do was to chase away a civilian that was already in the process of looting one of the occupants that was trapped in the cockpit.

With nothing to be able to do for the occupants that where evidently killed as a result of the crash he decided to return to his post instead of waiting for the German Wehrmacht.

On his way back to his post he ran into the Oisterwijk Doctor Frans de Sain accompanied by his oldest daughter.

The doctor, who was also the head of the Red Cross in the area with his daughter as one of his assistance, was standing outside looking at all the aircraft coming overhead and flying to the east.

The secretary immediately told the doctor of the glider crash in kerkhovensestraat and that he came from the site were he had found no survivors.

Nevertheless the doctor decided to go over there immediately and took his daughter with him to assist.

After the doctor and his daughter arrived at the crash site they immediately checked inside the remains of the glider.

The glider had first crashed on top of a couple of popular trees and a big oak before hitting the ground.

The top of the oak tree had gave way when the glider had come on top of it and it then had ended up in the ditch with its tail pointing east under a 45 degree angle.

The tail section was in a reasonable state considering the violent crash and only the canvas fabric that covered the fuselage was ripped open.

The Willys Jeep inside the glider was now clearly visible and it appeared that driver Carson was still in it.

The Jeep had been firmly attached to the floor but had come lose during in the crash and had crashed trough the cockpit crushing both the pilot and co-pilot.

Part of the landing gear lay on the other side of the road against the wall of a small shed belonging to a farmhouse.

One of the other occupants, Robert Le May, was found in the middle of the road a few yards from the glider, his face was blackened by the exploding anti aircraft shells and he had a large open head wound.

In his hand he had a little pray book, and his helmet covered with bloody tissue was found near his body.

The doctor immediately began searching for means that could identify the men before any Germans would be arriving, in an attempt to hide and secure their identity’s.

The doctor knew that documents and maps where sometimes carried under the soldiers helmets so he decided to search for those first.

He assigned his daughter with the gruesome task to remove the crushed helmets from the soldiers in the cockpit.

The doctor removed everything that could give away the gliders mission and also took the soldiers rings and dog tags.

Everything was quickly hidden underneath their clots and would be handed over to the red cross secretary in a later stage.

The secretary would then have to hide everything until it could be handed over to the proper authorities in case they would be liberated.

The documents that the doctor found would be burned later in his fireplace.

Not long after the Doctor and his daughter had arrived and began their work also the German Wehrmacht appeared on the crash site.

The doctor and his daughter had just been able to hide what they had found and under gun point they were immediately ordered to step away from the glider.

The Germans also ordered the few civilians that where present to leave and go home.

Then the Germans took the time to inspect the glider and collected what was of their interest.

They took away the soldiers army boots, some of their clothing, cigarettes and a radio, communication equipment and also a big piece of the tow rope.

The Germans then ordered the Red Cross on the site to collect the remains of the Americans.

By spreading out a big white bed sheet they prevented any spectators to witness the way the bodies were removed from the glider.

The dead American Jeep driver that was still in his drivers seat stuck between the gliders twisted steel frame and the steering wheel.

His remains and that of the men in the cockpit could only be removed after the local butcher was ordered on the site together with his butchers saw.

After the Americans were removed from the glider the Germans ordered the local furniture craftsman of Oisterwijk to the location.

The four dead Americans were then placed on his large flat trolley and transported to the local cemetery located behind the St. Petrusbanden church in the village.

The next day they were buried in the presence of Pastor van Kemenade and Doctor de Sain after grave digger Mr. Van Eindhoven had dug their graves.

The night after the crash local residents had come to the crash site in search for souvenirs.

The Germans had left the glider without any guards so there was enough time to snoop around.

Amongst the visitors there were tree young brothers who lived in a farmhouse further down the road.

They had been allowed by their parents to go to the crash site during the daytime and had secretly decided  to return after dark when no Germans would be around.

The boy’s entered what was left of the glider and had been able to take a big mechanical Jeep part from under the hood and took it home on a wheel barrow.

Apparently this part was of some importance because the next day the Doctor came to their farm to collect the part again.

That same day the Germans had come back and after they had removed the Willys Jeep from the glider they had discovered that parts were missing.

Presumably someone had tipped the doctor about the boys being their that night.

This had made him to visit the boys and collect what they had taken in the hope that this would prevent them from being harmed if the Germans would found out what they had done.

Considering the violent crash the Willys Jeep appeared in reasonable condition and it was examined with great interest by the enemy.

The reason the Willys Jeep was reasonably unharmed could be the outcome of the occupants in the cockpit that presumably had cushioned the Jeep from serious damage.

After a while the Germans allowed locals nearer again and even allowed a little boy to climb in to the Willys Jeep.

It soon started to become a real spectacle.

Then the Germans had enough of it and decided to take the Jeep in their possession.

They had the white star on the Willys jeep hood painted over and when the motor was fixed by them they started using the vehicle as their own staff car.

A few days later the Jeep was seen in use by the German officer commanding the FLAK gun at the udenhoutseweg (streetname).

The glider was then left alone by the Germans and civilians were soon wondering around on the crash site.

Some of them took what ever was to be considered as a souvenir or could be used in or around their homes.

One civilian was able to reach out in the cockpit to get his hands on a peace of wooden steering wheel lying on the cockpit floor in front of the glider pilots seat.

He was also able to take a piece of the glider pilots steering pedal that was still only just attached.

During his effort to reach out to these objects he held on firmly to the steel cockpit frame and in doing so got his hand covered in a sticky bloody substance.

When he tried to rub his hands clean over the grass he came to notice that it was human tissue on his hands.

The crushed helmet he saw lying on the cockpit floor he didn’t bother to try and take that also.

Exactly this helmet, together with the other helmets, was placed on the wooden crosses at the graves of the four Americans from the glider in the cemetery in Oisterwijk.

Another part that was collected from the crash site was the outboard end of the rear section of the aileron, a piece of wood covered with canvas fabric.

After the war this piece would be painted over by a local resident of Oisterwijk as remembrance to operation Market-Garden.

Also big ribbons from the fuselage canvas fabric were cut away and also the landing gear, that was found on the opposite side of the crash location, was taken away.

That part would later be used to build a small trolley.

A part of the tow rope was taken by a farmer who lived in the street, and also a little wooden triangle door covered with canvas fabric and a little port window was taken by a local farmer.

This little door was later used to build a rabbit cage. 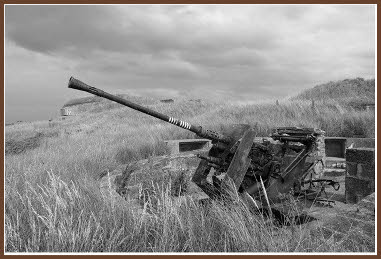 A CG-4A Waco glider. A glider like this crashed in Oisterwijk.

Pastoor van Kemenade during a ceremony at military graves at the cemetery in Oisterwijk.
Home 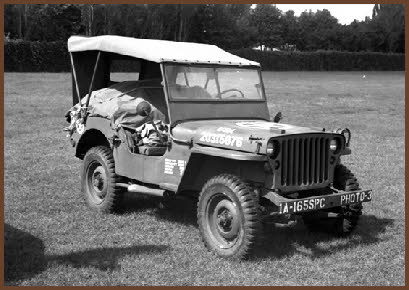 A Willys Jeep during the Second World War.
In this case a Willys jeep belonging to the US Signal Corp.
TOC
Previous
Next