The German troops in Oisterwijk

During the occupation of Oisterwijk the Germans took use of numerous of buildings for all sorts of reasons. At the works of the leather factory along the railway line they had a big medical supply depot installed which was named WVA (Wehrmacht Verplegungs Amt). Moreover, the leather production was also in their use which benefitted their war effort. The German Luftwaffe staff of airbase Gilze-Rijen (the grey gents) resided in the villa quarter in hotel ‘Bos en Ven’, and the Germans further had a large ammunition depot in the woods east of the village. This depot covered some 390 acres and and consisted of ammunition bunkers and open ammunition storage area’s all covered by the trees. The bricks for the roads the Germans had laid out through the forest that enabled them to transport the ammunition originated from debris that was left over of the houses after the German bombing raid on the city of Rotterdam on 14 May 1940. As a result of this raid the Dutch army and government had then capitulated.

The German transport unit NSKK, National Sozialistisches Kraftfahr Korps, tasked with the transportation of the ammunition was also located in the woods. At gemullehoekenweg. To this day there is still a grease pit visible in that part of the woods where this unit had its base. At the railway marshalling yard in Oisterwijk, located near the train station, the Germans loaded and unloaded their ammunition into boxcars for further transport. For this dangerous work the German had tasked Russian Prisoners of War (Osttrupen) captured at the Russian front and who lived imprisoned in Oisterwijk. These men were from Azerbaijani and Uzbek descent and this group also had to work on the depot itself. Near the end of the occupation, around September and October also locals from Oisterwijk and from the surrounding towns and villages were forced to work at the depot. This was mostly a punitive measure for some sorts of wrong doing or German allegation. During the war years also German officers and soldiers on ‘erholung’, special leave and R&R from front line duty’s, came to Oisterwijk. Usually they went back to the front after a short period.

Around September and October of 1944 a few well known high placed German generals resided in the area. In that period the German troops were on the retreat from France after Allied forces had landed on the beaches of Normandy that June and the planned a new frontline near the Dutch border.  After crossing the France had planned a stand at the border of Belgium and Holland. Small groups of retreating German soldiers that reached the Belgium Dutch border were refitted into new unit under command of the German General Command, Generalkommando VXXXIII (88) Armee Korps that was led by General Hans Reinhard. This general had his headquarters in Villa Zonnewende in Moergestel, a village east of Oisterwijk. His staff officers stayed in several requisitioned villa’s in Moergestel and in villa’s Oisterwijk. The well-known fallschirmjäger and Luftwaffe general Kurt Student was a regular visitor at Moergestel, and also Field Marshal Walter Model was seen in Moergestel on a few occasions. The newly formed units were then positioned in the new MLR (Main Line of Resistance) situated directly behind the Albert canal. Because of operation Market Garden many different German troops passed Oisterwijk on their way to the front line at the corridor (Hells Highway) to fight back the Allies. In this period the German 245 ID (Infantrie Division) had installed a field dressing station (kriegslazarett) in a school building at street poirterstaat. This field dressing station took care of the wounded German front soldiers and even British prisoners of war were treated here. 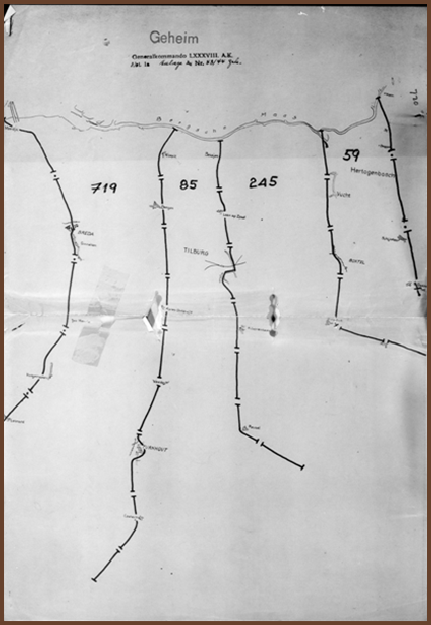 Elements of the 59 I.D. (generalleutnant- Poppe) and the 245 I.D. (generalleutnant- Sander) were also active in the surroundings of Oisterwijk during the last months of the occupation. In the neighbouring village Moergestel numerous troops were billeted in schools and stables, such as those at road Oisterwijkseweg. Sometimes even in civilian houses and villas were, according to their status, size and location, German officers were billeted too. With the HQ of 88 Army Corps in Moergestel more danger for came to the area for Allied air attacks. Such was at 24 September, when RAF Typhoons tried to destroy general Reinards HQ at Zonnewende estate, but the pilots made a mistake and their rockets came down around the Stanislaus monastery.

While in Moergestel the German 88 corps consisted of a number of units. Active under this Corps was 347 Infantry Division, 16 Luftwaffe-Felddivision, 719 Infantery Division, Artilleriekommandeur 119, (later 488), the 613th Tank Company, 835th Pionier Battalion and the Nachrichten-Abteilung 488. Later during the war also a (fast) Bicycle Brigade (schnelle Brigade auf Fahrrädern) was added to the corps. troops of 256 Volksgrenadier Division lead by general major Gerhard Franz were Also at the area around Oisterwijk during september/oktober, and troops of Kampfgruppe Chill (85 I.D.) lead by generalleutnant Kurt Chill, were at Oisterwijk and Moergestel during the final stages of war. Further troops of 712 I.D. lead by generalleutnant Friedrich-Wilhelm Neumann passed through Oisterwijk on its way to the frontlines.

As a Red Cross man Doctor Frans Desain played an important role for Oisterwijk during the end of the war. He was regularly called upon when in the surroundings of Oisterwijk an Allied plane had crashed or crash landed resulting in injured crew members. Ones even, when a local resident was hiding for the Germans on a neighbouring attic, food was provided to this man by a hole through the roof from the Doctors attic. Under the difficult circumstances of war the doctor had managed to underkeep a reasonable good contact with the Germans, and it’s said he even earned some kind of respect from them. It must have been as a result of his cooperative way to the Germans and tough his kind of fearless attitude against them. Possibly this contact found its way through the German field dressing station that was located near the doctor’s home annex practice. This German field dressing station was located in the building of the girlsschool that was part of the Catharinenberg convent in Poirterstraat. This field dressing station was lead by chief of staff Dr. Zink and staff surgeon Dr. Auer. These German officers had access to large amounts of medical supplies from the WVA storage at the Oisterwijk leather company and because of the scarcity of medical supplies it was of great interest for the doctor to underkeep good relations with these officers.

This German army map shows the boundaries between the different German infantry divisions in the North Brabant province early September 1944.