On 26 November 1944 around 22:30 a RAF Haviland FB Mk-VI Mosquito bomber with no. NT207 OM-B crash-landed besides road Oirschotsebaan in Oisterwijk, opposite the heather locally known as ‘Kleine Oisterwijkse heide’. The aircraft was assigned to the 2nd Tactical Air Force, No.2 Group, 138 Wing, 107 Squadron and flew its mission from airfield A.75, Cambrai/Epinoy in France. Piloting the mosquito was Warrant Officer G. Warren, his Navigator was Sergeant W. Roberts. The mosquito was designed by the British in 1940 and was used by the Royal Air Force as a fighter and a day and night bomber. The aircraft was powered by two Rolls Royce Merlin engines and had a range of about 2000 km. It was armed with four 20 mm cannons and four .303 machineguns and capable of carrying a maximum bomb load of 2.000 lb. The aircraft was of all-wood construction and piloted by a pilot and navigator sitting side-by-side in the cockpit.

That 26 November night the mosquito took part in a mission consisting of eleven Mosquito’s from 138 wing that were to attack enemy troop movements on the waterways at, a) Groningen, Leeuwarden, Sneek; (b) Assen, Meppel; (c) Zwolle, Meppel, Hoogeveen, Meppen; d) Zutphen, Hengelo. During the mission eight small ships were attacked and two railways were bombed. A long train with two locomotives was attacked plus further targets of opportunity of which one was a German Flak position. During their mission the aircraft dropped thirty-six 500-pound bombs and fired 1840 cannon and 700 machinegun rounds.

During this mission the mosquito of pilot G. Warren was hit by German anti-aircraft (Flak) over enemy territory while attacking a train. Due to the damage Warren was forced to land his aircraft, preferably in liberated territory. Over Oisterwijk navigator Sgt. W Roberts parachuted from the aircraft and landed on the outskirts of Oisterwijk on a farmers courtyard injuring his neck and chin on the farmers taut wash lines. Pilot Warren made a belly landing along the Oirschotsebaan opposite the heath ‘Kleine Oisterwijkse Heide’, just next to a farmhouse. During the landing his aircraft caught fire and Warren was injured severely. The Oisterwijk fire brigade was alarmed but, on their arrival, they could do nothing else then watch how the wooden aircraft burned to the ground. After a short and fierce fire only two engines and some small metal parts was all that was left of the aircraft. Pilot Warren was carried away by the military medical service and was cared for.

During that night of a total off forty-one other mosquito’s of 138 Wing were sent out to attack roads, railways and waterways in the Netherlands and North-Western Germany. The aircraft were divided into groups and were each assigned a task and an area. For task I fifteen mosquito's went to the area Rotterdam, Hilversum, Deventer, Dusseldorf, Heinsberg, Venlo and along the bomb line to zaltbommel, Rotterdam. They were briefed to pay special attention to ships in the area of the Weser.

For task III eleven mosquito's, including the mosquito of W/O G. Warren, went out to attack enemy movements on the waterways in the areas; a) Groningen, Leeuwarden, Sneek; b) Assen, Meppel; c) Zwolle, Meppel, Hoogeveen, Meppen and d) Zutphen, Hengelo.

The mosquito's of 138 Wing that carried out the attacks altogether dropped a total of -500 one-hundred-fifty-one high-explosive bombs and shot 11160 20mm cannon and 15520 machine gun rounds. 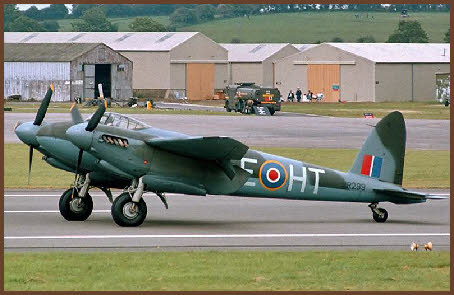 Above: The Havilland Mosquito.

Below: A Havilland Mosquito is being armed with it's load of bombs.