On 26 July 1943 at 01.20 hrs a British Halifax-II bomber aircraft crashed north of Oisterwijk on the Kampina heath. This Halifax bomber fell victim to a German night fighter when it was on the return flight from a bombing raid on the German city of Essen in the Ruhr area, Germany's industrial hart. The aircraft had a British Canadian crew of seven and flew as number 26 in a formation of Halifax bombers. Four miles north-east of Tilburg, while at 18.700 feet, the aircraft was suddenly attacked by an enemy night fighter and, with a series of deafening crashes followed by a load roar the bomber pitched forward and started to go down with the starboard wing on fire.

The German night fighter had scored a direct hit and the aircraft plunged to earth moments later crashing on the Kampina heath, some 200 yards south of moor Belvertsven. Here the remains of the aircraft partly burned out. Radio operator Sergeant Ray Smith and pilot Sqn/Ldr Fransis John Hartnell-Beavis were the only crew members that had been able to bail out of the doomed aircraft by use of their parachutes. The remainder of the crew perished either during the attack ore in the crash. After the aircraft had hit the ground, the front section burned out halfway to the wings, though the tail section somehow remained reasonably intact.

The Halifax-II with serial number JD207 and code ZA-V was nicknamed by her crew as 'V' for Victor. The aircraft was attached to ‘A’ Flight in spite it was a 'C' flight bomber. The aircraft was a Royal Air Force 10 squadron bomber based on RAF Melbourne in Yorkshire, England. 10 squadron was the only bomber squadron operating from this airfield during the Second World War and it flew a total of 300 bombing missions in which 128 Halifax bombers were lost. 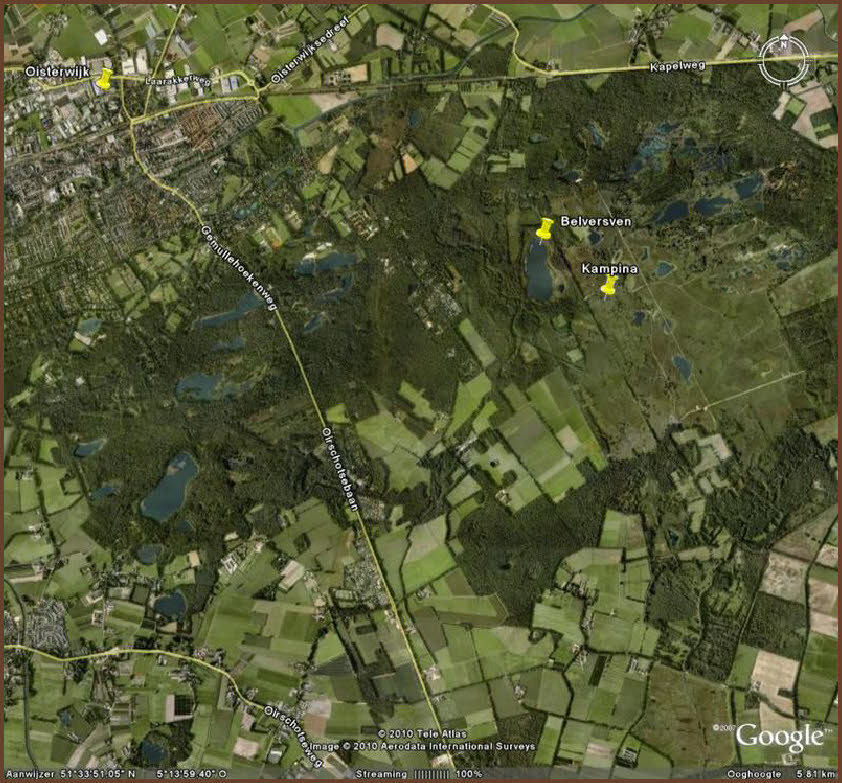 The formation of Halifax bombers from RAF 10 squadron took off from RAF Melbourne on 25 July around 22.15 hrs for a successful bombing mission on Essen in Germany. During their return flight the Halifax-II piloted by Sqn/Ldr Fransis John Hartnell-Beavis fell victim to the German Major/Group commander Werner Streib, a German fighter pilot of NJG/1. (Nacht Jagt Geschwader/1) This German pilot had taken off from airfield Venlo in occupied Holland near the Dutch German border. The experienced Werner Streib was a real "ace" and at the end of the war he could count no less than 66 victory’s with a total of 65 score’s during night missions. The often as "Father of Nachtjagt" named Streib developed the operational tactics of the ‘Nacht Jagt’ (Night Hunters) in the beginning of the Second World War. Together with the German pilot Wolfgang Falck he developed the Luftwaffe night fighter section into an effective group that fought against the night bombing offensive, launched by the Royal Air Force.

During the months of June and July of 1943 Werner Streib flew a prototype night fighter aircraft named Heinkel He.219 in which he claimed to have shot down five Lancaster bombers during the month of June in just 30 minutes! One night, during his return to airfield Venlo Major Streib miscalculated his approach by a poorly lighted runway and touched down hard on the runway. The aircraft broke apart on landing with the cockpit section sliding down the runway for 55 yards. Streib and his radar technician where slightly injured and the aircraft was totally written off. Nevertheless, Streib kept on flying the prototype (Heinkel He.219) in the 10 days that followed in which he managed to shoot down twenty RAF enemy aircraft, including six Havilland Mosquito's. During his night mission with this new fighter, he had adopted the tactic to infiltrate between the formations of enemy bombers which enabled him to successfully shoot down no less than four Halifax bombers and one Lancaster. Major Werner Streib would end his career at the end of the war as Inspector of the Night Fighters with the rank of Oberst. 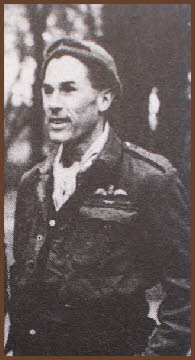 De crew members onboard the Halifax-II where:

The day after the crash the aircraft was thoroughly investigated by a technical team of the German army. Some objects were removed from the wreckage and taken for further investigation. What remained of the bomber was removed in parts to an unknown location. Such aircraft parts were often processed as raw materials after they were transported by train to aircraft scrap yards in Germany or Holland. Aircraft that crashed in Holland many times ended up at scrap yards at Vught near ‘s-Hertogenbosch or Utrecht and Ypenburg near The Hague were the Germans had aircraft scrap yards.

The five crew members that perished in the crash were all removed from the wreckage by the Germans and brought to Eindhoven and in the presence of a priest buried with military honour at the General cemetery at Woensel. After the war Canadian Pilot Officer Cecil Earl Hightower of the Royal Canadian Air Force was relocated to the Canadian military cemetery in Groesbeek in Holland. After Sgt Raymond Smith (radio operator) had bailed out by parachute he landed in a forest approximately 5 miles from the city of Tilburg. Here he received help from two English speaking Dutch men and he was brought to the city of Rotterdam. From Rotterdam he was hidden at various places in Holland between 26 June and 9 October. On 9 October Smith left for Paris by means of Amsterdam where he stayed until 14 October. He left Paris on 14 October and travelled to Bordeaux and Bayonne. Along with a few companions he reached Dax in southern France where he spent a day in a hotel. When they wanted to travel to the Spanish Irun by train they were warned just in time that the train they wanted to board was full of enemy troops. One way or another they were able to hide underneath a train carriage by clinging on the cross girders with hands and feet. It became a hazardous journey and they could just keep themselves from falling from the train during the time it was moving. After they reached Hendaye near the Spanish border they crawled from underneath the train carriage and ran up the tracks in search for the train to Lisbon. They discovered that the Lisbon train had already left so they spend the day hiding underneath a train again. In the end they were able to board a train to the Spanish San Sebastian where they arrived on 16 October. Since they did not have any tickets they managed to get out of the train station by walking through the goods entrance while wearing berets and coveralls for disguise. In the main street they stopped a man and asked him the way to the British consulate. The man showed them the way and there they waited until personnel of the consulate turned up. The next day they were taken to Madrid and from there to Gibraltar where they arrived on 25 October. Two days later Sergeant Raymond Smith reached England safe and uninjured.

The Pilot Francis John Hartnell-Beavis was also able to bail out by parachute and came down safely north of Oisterwijk. Hartnell-Beavis was an experienced pilot who was at the end of his 2nd ‘tour’ (he had flown 25 operations, 5 more than the required 20 for a second tour). He had decided to fly the mission despite the fact that he didn’t need to fly anymore. He was awaiting posting at a transport command, but because of rivalry with the 'Timber crew’ he had hoped to get one ahead of them since they were not scheduled to fly this mission. Hartnell-Beavis had already experienced an aircraft accident during his career when he flew Blentheims at 82 Squadron. During a flight in bad weather on 9 June 1940 his aircraft, Blenheim R3759, was hit by lightning causing him to make a forced landing on Hendon aerodrome. After two attempts to land he touched accidently down besides the runway and could not prevent crashing into a gun emplacement. Hartnell-Beavis was seriously injured in the crash as was his navigator Sergeant Phipps.

After Hartnell-Beavis had landed safely with his parachute on the Kampina heath he could see his burning aircraft from a distance. He decided to leave the area quickly and he was able to reach the area of Eindhoven all the way up to the Belgium/Dutch border the following days. There he came in to contact with locals who gave him the impression of dealing with the underground where he was assiduously in search for in the hope to be helped with an escape back to England. Unfortunately, his helpers had other plans and betrayed him by delivering him to the Germans. He became imprisoned and he was interrogated by the Germans. They finally transported him to Germany by means of Amsterdam where he was locked up in prisoners camp Stalag Luft III. Stalag Luft III was the camp from were in 1944 the famous Great Escape took place (from the movie). By digging tunnels underneath the camps fence work more than seventy prisoners were able to escape. The Germans were able to catch most of the prisoners again and in order to set an example for any future escaping attempts more than fifty of the caught prisoners were executed. Three prisoners managed to stay out of the hands of the Germans and found their way to safety. The Dutch prisoner Bram van der Stok was one of the lucky three that could escape. While the two Norwegian prisoners Per Bergsland and Jens Müller paddled to neutral Sweden by boat Bram van der Stok bicycled on his own to Holland.

Because Hartnell-Beavis had studied architecture before the war he could assist in making a monument for the murdered escapees from Stalag Luft III. This monument, named “The Fifty”, was placed on the local cemetery near Stalag Luft III, along the road leading to the entrance of the former camp. Hartnell-Beavis survived his imprisonment and the war and he returned to England where he lived a good life until he passed away in July of 2007. 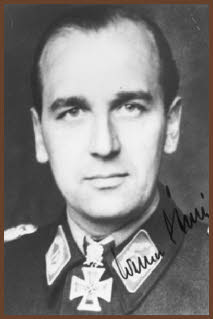 Above a German Heinkel He.219 night fighter.

The Luftwaffe allowed the prisoners to design and make the monument for the fifty Allied prisoners that were killed by the Germans. The monument was designed by Wilton Todd (169 Sqdn shot down 15/16 Feb 1944 Mosquito II HJ707 VI-B). The three stone blocks with the fifty names were engraved by Dickie Head (139 Sqdn shot down 24-25 Nov 1943 Mosquito IV DZ614) and Fransis John Hartnell-Beavis. On the monument it reads “in memory of the officers who gave their lives. Sagan March 1944.”

Pilot of the Halifax II,