In the afternoon of Monday 18 september 1944, the second day of the Allied airborne landings as part of operation Market Garden, at 15.06 hrs, an allied glider was shot down over Oisterwijk in North Brabant. It was an American CG-4A Waco glider on tow to its initial point near the Brabant village of Vught, about 8,5 miles from Oisterwijk. From this initial point the tug pilot had to choose his appointed landing zone for the operation and had to adapt to the required speed and altitude for the final approach. The target for this operation were landing zones near Eindhoven, Nijmegen and Arnhem.

On that moment the glider was only 9 minutes from its appointed target, landingzone W at Son, some 18,5 miles from Oisterwijk. The glider was one of eighty Waco gliders that had taken off from Chilbolten airfield in Hampshire in the south of England. Because of heavy fog over the Southern supply route the second route, the Northern supply route, was chosen that day to fly the gliders and troops over to Holland. The glider was being towed with a nylon tow rope that was attached to an American C-47A Skytrain/Dakota tug aircraft of the American 50th Troop Carrier Wing. This aircraft carried registration number 43-15137 and belonged to the 442nd Troop Carrier Group, 306th Troop Carrier Squadron. Both the glider and the tug aircraft were stationed at Chilbolton airfield. The crew onboard the C-47 existed of the following members;

The crash of glider the ‘Queen-City’

It was the crews’ second mission for operation Market Garden. On the 17th of september they had flown their first mission for this operation from Chilbolton which was a parachute and parapack drop over dropzone B at Son. They had carried paratroops of the 506th Parachute Infantry Regiment, I Company, 3rd Battalion of the 101st Airborne Division. They further had carried a load of four parapacks attached under the aircraft which had been loaded with mines, 81mm shells and rations and which were dropped over the dropzone.

1st Lt. Maynard had also flown a mission during Operation Overlord (D-Day) on June 6 1944. His destination had then been dropzone T in the Merderet Sector in Normandy France. For this operation he had been transporting 18 airborne troops from B company of the 507th Parachute Infantry Regiment of the 82nd Airborne Division. His aircraft then also had carried four parapacks with LMG, Light Machine Gun ammunition, Anti-Tank grenades and rations that where dropped over the dropzone.

The Waco-glider was named ‘Queen City’ after the glider pilots’ home town. The gliders serial was 42-79151 and together with the name ‘Queen City’ she also carried the name of the glider pilot’s wife on the cockpit which was ‘Clara’. Piloting the Waco glider was F/O (Flight Officer) Noel C. Mc Cann from Norwood Ohio, a suburb of Cincinnati. F/O. Mc Cann belonged to the American Troop Carrier Command, 442nd Troop Carrier Group, originally 306th Troop Carrier Squadron, but for this operation he had been assigned to the 303rd TCS and based on Chilbolton airfield. It was F/O Mc Cann’s first glider mission for operation Market-Garden.

Because the glider did not have any engines to take off again, Mc Cann wasn’t capable to return to England and thus had to first stay close to the troops he had carried in. His responsibility though was to return to a pre-assigned assembly point as quickly as possible in order to be returned to his home base in case he was needed for another mission. 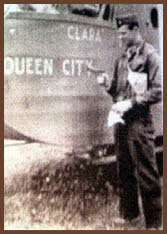 F/O Noel C. Mc Cann with his pistol beside the cockpit of his glider
(source: Doug Wilber, USA)
507 PIR 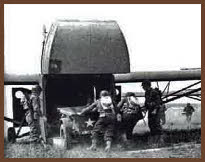 Besides Mc Cann a co-pilot was seated beside him named Lt. Ray J. Hiltunen. Lt. Hiltinen originated from Baker Company, 326th Airborne Engineer Battalion, 101st Airborne Division, Combat Engineers. Lt. Hiltunen was not a real co-pilot, but due to the shortage of co-pilots during this stage of the war he was instructed as a so-called ‘on the job’ co-pilot. He was tasked to keep an eye on the gages in the cockpit together with the pilot and in an emergency to assist F/O Mc Cann in piloting the glider. As soon as the glider would have landed Lt. Hiltunen was further instructed to operate the upward-hinged nose section of the glider to unload cargo onto the battlefield quickly.

In the back of the glider were seated Combat Engineers driver Pvt. Raymond L. Carson and Tech/5. Robert J. Le May both also from Baker Company 326th AEB. The cargo F/O Mc Canns’ glider carried a Willys Jeep that had the name ‘Shirley’ painted on the side of the vehicle. Carson and Le May were both seated in the Willys Jeep during the flight so to be ready to exit the glider by jeep as soon as the glider would have had landed safely on the landingzone.

These tree Combat Engineers, together with other elements of the 326th AEB, were assigned to repair the destroyed bridge over the Wilhelmina canal at Son which was destroyed by the Germans during the battle a day earlier. In a later stage they would have to help in replacing the bridge by a Bailey bridge, which was to be brought in by British engineers. On the first day of Operation Market-Garden the bridge over the Wilhelmina canal had been one of the main objectives for the 101st Airborne Division and had to be taken intact to secure a route over the Wilhelmina canal for the British that would be advancing towards Arnhem from the Belgium border. When troops of the 506th PIR, after being heavily shelled by 88’s that were securing the bridge, had the bridge in sight the Germans detonated their charges and the bridge was destroyed in front of their faces.