The crash landing of Spitfire PT996 in Oisterwijk

In the morning of Friday 20 October 1944 at 10.35 hrs a British Spitfire crash-landed in Oisterwijk due to engine failure. The aircraft came from the direction of the city of Tilburg and made a hard belly landing on street Oisterwijksebaan. The aircraft, type Spitfire-MK IX, was piloted by the French pilot F/LT. Pierre Gallay of Groupe du Chasse III/2, “Alsace” of the Free French No.341 Squadron. F/LT. Gallay had taken off that morning from an airstrip at Wevelgem in liberated Belgium. The experienced French fighter pilot Gallay underwent his pilot training at the Royal Air Force during the beginning of the war. During his training in 1941 he also had to perform an emergency landing. when flying at 5 FTS (Flying Training School) from RAF Cosford in a Hawker Hurricane. This happened on 28 September when during the course of his flight he got lost and had to make an emergency landing (perhaps because of lack of fuel) in Chadwell in Shorpshire. Fortunately, Pierre Gallay was not injured during the landing and he could return back to his base again unharmed. After his training period at the beginning of 1942 Pierre Gallay was transferred to GC1 "Alsace" in Damascus Syria in the Middle East. In October of 1942 the free French pilots of GC1 and GB1 returned back to England and Pierre Gallay was then transferred to No.341 squadron "Alsace".

In the morning of 20 October Pierre Gallay (callsign, Yellow 1) and pilot Michel Brunsshwig (callsign, Yellow 2) flew a reconnaissance mission in the area near the Belgium border close to the city Tilburg. During an attack on a German army vehicle at the Wilhelmina Canal in Tilburg Pierre Gallay and Michel Brunsshwig came under fire from a German anti-aircraft gun (Flak) that covered the skies at the edge of the city. During the attack Gallay’s aircraft became seriously damaged which forced him to land behind enemy lines. He piloted his aircraft away from the railway bridge over the Wilhelmina Canal and descended into to the direction of Oisterwijk were he had to make a crash landing. Pierre Gallay touched down in the middle of street Oisterwijksebaan, just past the intersection of roads Laagheukelomseweg and Oisterwijksebaan, near a farmhouse belonging to the Van Rijswijk family. The hard belly landing caused significant damage to his aircraft with parts coming loose during the rough landing. Parts of the coolers and the air intake at the bottom of the machine broke away and also the undercarriage was badly damaged. Even the onboard machine guns broke loose from the wings during the violent crash landing. They were found on the ground in front of the aircraft not much later. The four propellers broke away and were found yards away from the aircraft indicates that at least his propellers were still turning during the crash landing because. Hadn’t’ this be the case the propellers would have only have been bent or one or two would have had broken off. The holes in the fuselage caused by the anti-aircraft were clearly visible over the entire length of the fuselage.

After the landing Pierre Gallay quickly abandoned his aircraft and hid in a nearby ditch waiting what would become next. From hiss hiding spot he witnessed witness curious locals approaching his aircraft. After a while he moved away from the ditch and fled in to the direction of a local cafe named 'Mie Pieters’ with the assistance of a Dutch citizen. Here, in the direct surroundings of that café, Gallay was hidden in a barn and with the help of the Oisterwijk underground he stayed there in hiding for the next couple of hours. During the occupation the Oisterwijk underground had been responsible for the hiding and escape of many other allied airmen and personnel that found themselves behind enemy lines due to early landings. During Operation Market-Garden for instance the Oisterwijk underground was able to assist in the hiding many allied glider troops, US Air Force and RAF personnel and other Allied servicemen in the forest located between Oisterwijk and Boxtel after they had been forced to land behind enemy lines. This forest was named ‘Kampina’ and also consisted of many moors and heath land. Pierre Gallay was not hidden here however, instead the underground brought him to the city of Tilburg were he was housed and hidden with a Tilburg family at park Wilhelminapark.

After Pierre Gallay had abandoned his badly damaged Spitfire in search for a better hiding place more and more locals came to the crash site to have a look. The Germans also soon appeared on site and started to investigate the aircraft. They did not find much of their interest though and soon the locals were allowed to have a closer look at the aircraft. After a while though the Dutch started doing this 'looking’ with the use of a hammer and screwdrivers in the hope to retrieve a nice aircraft souvenir to take to their homes. Soon a real spectacle unfolded and the German soldiers, standing in front of the aircraft, would quickly regret their gesture to let the people approach the aircraft. At some point a small boy climbed in to the cockpit and fouled around with the controls and the switches. By doing so the boy accidentally fired the undamaged and still operational cannons in the wings and a salvo of 20mm bullets were fired into the direction of the German soldiers standing in front of the aircraft. This particular version of the Spitfire was equipped with multiple cannons and machineguns in the wings. In addition to its four browning machine guns the aircraft was also equipped with two 20mm Hispano cannons. After this accidental salvo the Germans made an end to the spectacle and immediately send everybody home. They then pointed guards at the aircraft and returned to the village. After a few days, when Scottish troops were reported on the outskirts of the village, the German guards tossed a grenade in the cockpit and left the aircraft and returned to the village to help defend Oisterwijk against the Scottish troops.

A young Oisterwijker around that time was able to take out the entire pilot seat from the cockpit as a souvenir and took take it home. For years Galley’s pilots seat stood in his bedroom besides his bed. Another young Oisterwijker, who actually was one of the first to arrive on the crash location, took home a souvenir. It was a large part of the undercarriage. The right aluminium wheel cover. With the help of the Tilburg underground Pierre Gallay stayed hidden in Tilburg until the end of the war. When the city got liberated on 27 October Pierre Gallay left his hiding place and could safely return to his squadron. Here he arrived on 29 Oktober, nine days after his crash landing at Oisterwijk. Pierre Gallay stayed with his unit until 17 January 1945 and then left the Free French Air Force. 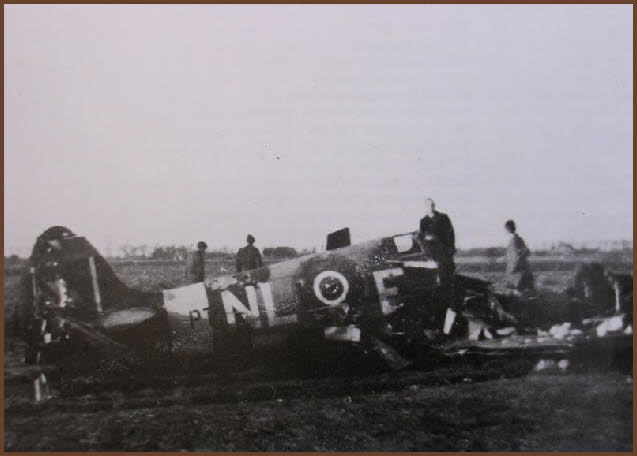 The Spitfire of Pierre Gallay at Oisterwijk after the liberation in 1944.
In the background behind the aircraft two allied soldiers wearing berets. 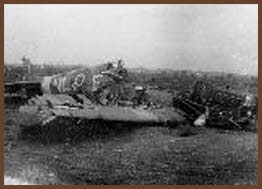 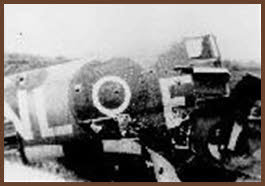 Two a bit unclear images of the aircraft.
Home
TOC
Previous
Next