Memories of Kees vanderheyden from Oisterwijk

One morning during our long wait for the arrival of our liberators, my friend Leo and I found ourselves an unlikely group of allies. We became their friends and co-conspirators.

Papa had told me that the Allies would soon be coming to liberate us. In his mind, that meant Canadians, Americans and British soldiers. But my first allies were tall men from a mysterious and far-off land.

Early that morning, long, dusty wagons hauled by enormous horses brought a group of about thirty very tall, very dark-skinned men to within a few meters of our house. They spoke a strange language that was definitely not German. Leo and I looked at them from the dark bushes along the road. They smiled at us. And such smiles! They had black eyes, and nearly all had at least one golden tooth shining like a miniature sun: several had more than one! One man had a whole mouthful of these golden teeth. We were positively spellbound.

It was obvious that these men were prisoners of war. German soldiers, arms ready, guarded them closely as they dug deep, neat, round holes along the main road leading to the village. These holes would be used to shelter German soldiers and their machine guns during the final battles with the Allies. Of course Leo and I aligned ourselves firmly on the side of the prisoners. After all, the Germans had us all at their mercy. There was not much we could do for them except wave at them to show them our friendship. A hidden wave, a wink, always rewarded by the flash of those sparkling teeth.

At first, we observed the prisoners without speaking as they worked with their great shovels or smoked quietly during their short breaks. They winked back and sent us guttural good-days from another world. These brown-skinned men looked rather like the Tartar warriors I had seen in pictures in my school books. They must have been rich, anyway, to have golden teeth.

Little by little, Leo and I sneaked a little closer to our allies, and one morning we were able to speak a few words to them. “Good morning. Where are you from?” The men sent us glowing smiles, shrugging at the same time as if to say, “I don’t understand.” “Me Dutch. Dutch!”. They laughed deep in their chests and pointed at one of their company: “Ruski! Ruski!”.

This was a foreign word, but it was a lot like the Dutch word “Rus”. These must be Russians. Russian prisoners, far from their families, digging holes for the enemy. When they stopped for a cigarette, one of the Russian men offered me one. “Papirossa papirossa”. That must be the word for “cigarette” in Russian. I was proud to have been given such a valuable gift by my secret friend, even if I was not allowed to smoke. “Ruski, thank you very much.”

The golden teeth flashed a glorious smile. The only cigarettes Leo and I had any experience with were the ones we rolled ourselves using linden leaves, and those always made us sick. Actually, the Russian cigarettes were not much better: the tobacco was black and the taste bitter. The thick smoke made us choke, but we smoked bravely on and finished our little bit of cigarette. It made us feel closer to our prisoner friends and stronger, like them.

Every morning we waited for our allies, and every morning, the same scene played itself out between shovel loads. Good morning Ruski!

We got bolder and bolder, even to begging for the black “Ruski Ruski papirossa” cigarettes and we smoked in friendship, hiding at the back of my friend Leo’s garden. Until the Russians disappeared. Would they be able to return to their own country?  Would we see them again when the Germans were finally beaten and peace came to our lands? Meanwhile, our mornings seemed empty and sad. 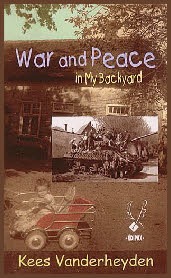 Information on “War and Peace in My Backyard”