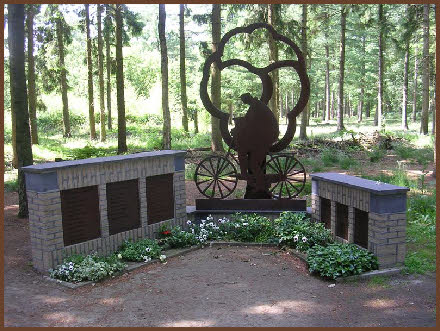 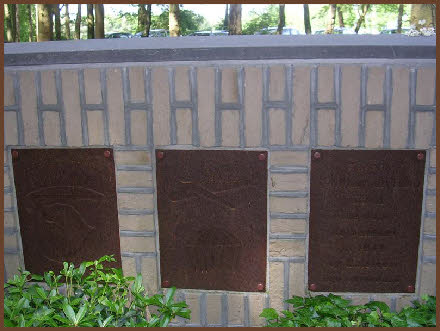 This memorial is erected as a reminder to the Dutch resistance workers from the area of kampina responsible for hiding Allied airborne troops and Allied crew members in the Kampina forest between Sepetember and October 1944. The memorial is designed by B van Houtum from Boxtel and is placed on the edge of the Kampina in 2003.

The Kampina area consist of wood, heather and moors located between the villages Oisterwijk and Boxtel.

The memorial depicts a steel silhouette of a resistance man riding on his bicycle with a milk churn between his legs and a tree in the back ground. The bicycler points in to the direction of the hiding place were the soldiers were hidden in the forest and. The milk churns where used by the underground to hide the food needed to feed over one hundred hidden airborne troops. It was a familiar site in those day’s for a lot of farmers transported their milk in this fashion.

Steel plaques in two small walls are engraved with names of people who played a important part in this piece of local history. The steel is of the quality that only rusts on the top layer but doesn’t affect the steel. We call it ‘kortenstaal’ in Dutch. One plaque shows the names of the actual underground workers who had the most dangerous assignment of visiting the hiding place in the forest.

One plaque remembers two brothers of the Schut family who lived on a farm in nearby hamlet of Balsvoort. The brothers where both executed by the Germans because they suspected them of taking part in resistance activities at Kampina.

Two other plaques show a glider and parachute and a 101st Airborne image.

Underneath the bicycle is written in Dutch ‘ALLES IS VERGEEFS ALS WE VERGETEN’ - ‘EVERYTHING IS IN VAIN IF WE FORGET’.

The airborne troops were never caught because the Germans where afraid to enter the forest. It was not the first time that German patrols where ambushed by the resistance and robbed of their weapons and clothing, items the resistance later could use against the Germans them selves.

Also because of the fighting around Eindhoven and at Hells Highway most German troops were deployed there.

Only a few still now to find the place although the surroundings have changed a lot over the years due to logging in the past.