Pierre Gallay tells his story in 1944 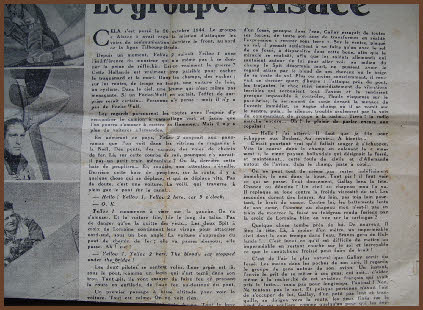 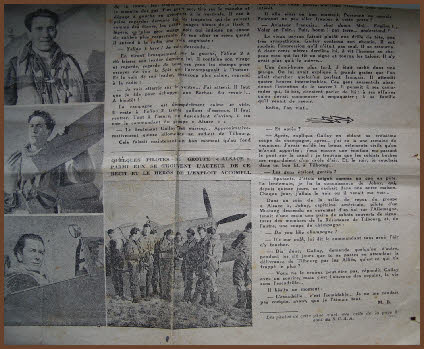 After Gallay had returned to his squadron a French newspaper published an article with an interview with pilot Pierre Gallay and his Group Commander Michel Brunschwig. After reading this article, I as a born citizen of Tilburg, can conclude that the air attack by these French airmen on a (German) vehicle took place at the Wilhelminacanal in the east of the city in the direct vicinity of the double railway bridges over the canal. The vehicle could have crossed one of the two canal swing bridges in this area, to be a swing bridge at the road Bosscheweg ore the swing bridge at the road Oisterwijksebaan.

As described in this article the two Spitfire’s attacked after a left turn over a north-south direction, indicating they most presumably performed the attack coming from the direction of the road Bosscheweg. During the attack Gallay´s Spitfire was hit by German Flak at the railway bridges and descented in a straight line into the direction of Oisterwijk, were he crash-landed on road Oisterwijksebaan. Its not clear  is on which side their target, a German vehicle, crossed the canal, as it was possible to drive on both sides of the canal in those days to reach the canal crossong of the railway bridges. To commence a first attack after a left turn over north-south the two Spitfire’s probably followed the canal coming from the south of the railway bridges until they spotted their target.

TRANSLATION OF THIS ARTICLE:

It was October 1944 when it happened. The group “Alsace” had received the assignment to attack German communication lines between the cities Breda and Tilburg. For a while pilot Michel Brunschwig with callsign Yellow 2 followed pilot Pierre Gallay with callsign Yellow 1. Without worrying themselves the two flew through the Dutch skies looking down on grazing cows in fields with occasionally a hay cart or cyclist passing below them on the Dutch roads. It’s quit in the sky. When a Focke-Wulf would suddenly appear, the surprise would be immense, but there is no Focke-Wulf. Their eyes look down on the roads in search for a target. A camouflaged German vehicle for instance, that could then be attacked and set on fire. But there is no German vehicle. While they admire the panoramic view of rows of poplar trees, bridges, canals and railways, Yellow 2 suddenly spots something that is moving with great speed. It is a car that crosses a canal bridge at full speed.

Yellow 1 turns left…now the fun starts. The vehicle is going at full speed along the bank of the canal…they don’t lose him out of sight and both Spitfire’s come in a position to attack their target over a north-south line. The vehicle is almost at the railway bridges…he will go underneath…he made it...damn!

The vehicle has stopped under the bridges, their pray is trapped like a rat. Too bad, but they will still try to attack anyway after lining up with the road to fire underneath the bridge. First a low left turn to see the vehicle. All is quiet and nothing was to be seen over the entire length of the road. Yellow 2 pushed the throttle forward and pulled back on the stick to climb up vertically out of his sharp left turn. Suddenly he is followed by tracers and he is afraid to look at the tracers that follow him like small rockets. Small clouds of exploding Flak are all around him and suddenly large black smoke is admitted that tells the Flak hit something. His hart brakes when he hears a disappointing voice over his radio.

During the Sharp left turn Yellow 2 lost sight of Yellow 1. He looks around to every side to locate the Spitfire that he was just following during the manoeuvre.

…I have to make a forced landing and when I’m down safely I will have to escape from the enemy…until we meet again.

Then it’s quiet on the radio. Yellow 2 keeps circling around in the close vicinity until he has 30 gallons of fuel left and has to return to his base. There he will inform the commander of the group “Alsace”  that LT. Gallay is missing in action about three miles south east of Tilburg.

It took a long time that deep in the ditch, almost in the water. Gallay heard a voice within himself saying…go into hiding. He lay on his belly flat on the ground and so close he hoped to disappear in it. Disappear, so in a miracle the Germans would not see him, and that his blonde hair and his pilot jacket would not give him away. All that time while he was lying there, he relived his last fifteen minutes of the flight. The attack on the bridge, the tracers immediately followed by a terrible shock and vibration across the entire aircraft that made it almost impossible to control her. The oil on the windscreen of the cockpit and his fear of what would be the direct effects of this until on the field where he had to vomit. And then, all of a sudden, the silence was broken by the voice of his group commander on the onboard radio. Oh, the pleasure to talk to a friend again.

…Hello I have landed...I have to escape for the enemy...until we meet again.

Indeed, he had to think quickly about escaping. Quick into the field and get rid of my Mea-West vest. Escape from my aircraft that will be surrounded by Germans and civilians soon in the field along the one I’m in. I cannot continue to stay in this position with my nose in the mud.

Gallay raised his head with caution, bad luck, a civilian holding a hat in his hands has seen him. He quickly ducks to the ground with his face flat on the wet soil. The seconds seem to take hours. In the distance a sound of a cannon. He feels the slow beating of his heart. The civilian with the hat looks at the Lorraine cross on the aircraft and acts like he doesn’t see Gallay in the ditch. Then he hears something close to him. A few yards away a civilian in a raincoat is walking through the wet field.

It’s incredibly difficult to try and stay dry lying on the ground and to avoid making any noise. It’s for the best that Gallay leaves the ditch. With his hands in his pockets looking at the people around his aircraft he has a moment in which he has the need to join the group of people. Who knows, maybe there's someone that wants to search for the escaped French pilot, to locate and help him. But no, no one is doing something to help him, he the bastard! no one!

And since nobody seemed to care about Gallay he slowly and quietly walked away, his eyes focused on his shoes like someone who is not interested in the events of this war. I walked for a short distance, followed by no one. Why don’t I knock on that door?

He spoke in English. …French pilot …shot down, …I English! …in the air …then boom! …on the ground…understand?

The old farmer acted strange and not very nice. Gallay continued to walk on until he suddenly had the feeling that he was not alone. When he turned around, he sees the man with the hat 200 yards behind him signalling to follow him and then turns around. There would be even more to follow.

Half an hour later he was hidden in a barn. By using hands and feet Gallay was told that someone was going to search for someone who could speak French. Four endless hours Gallay waited, would the people have given up the intention to save him? He thought of his comrades, who in the other country would now talk about him being missing and that they would be collecting his personal stuff. And of his family that he recently had met again. At last, they came.

After Gallay emptied his third glass of champagne he explained. …I had a week of vacation. I was dressed nice with clothes I had received from the civilians. I found it difficult to cross the bridge over the Canal. I thought that the Germans were looking a bit odd at me. And that night, I slept in a fine bed in Tilburg.

Where the people nice?

…Certainly, I was treated like a king. The next day I met Johnny who was hidden fifteen day’s earlier in another house. Each day I went to him or he came to me.

In the corner of the lounge of the group "Alsace" sits Johnny, the American pilot of the Mustang that went down on the return flight from a mission to Cologne Germany. (P-51 Captain John Coleman Jr.) He has a pair of Dutch shoes covered with signatures of members of the Tilburg resistance in one hand and in the other a bottle of champagne.

Do you like champagne? …It is our milk, the commander said without blinking an eye.

Say Gallay, what affected you the most during your six days of stay in Tilburg until you were handed over to the allies.

…I don’t think I can answer that with a smile but.

One moment he hesitated and then answered: …The squadron is wonderful. I didn’t realize it before that I love it that much.

An RAF areal photograph of Tilburg dating from 7 September 1944.
Visible are the Wilhelminacanal and its bridges with left the double railway bridges.
Home
TOC
Previous
Next
A French newspaper article dating from the war.
(Click on the photo’s to enlarge)
(article courtesy of Bertrand Hugot, France)