From an interview with Ms. Door van der Meijden who returned to the hide out in the Kampina.

‘Only once in the autumn of 1944 Ms. Door van der Meijden-Konings was allowed to go along with her husband Gerard to the Kampina. There he and other resistance men from the Boxtel area had hidden over one hundred, mostly American soldiers from the Germans.

Gerard and Door van der Meijden were from the very beginning involved in illegal activities during the war. Café Royal at Stationsplein 12 in Boxtel was run by the couple after their marriage in 1942 and here the local resistance and underground workers regularly met. Gerard in particular was involved in the resistance. He was a local asset within the Dutch LO, the National Organization for aid to people who were in hiding, that was founded in that same year by the reverend Frits Slomp, alias the wanderer.

Café Royal was a central point within the Brabant LO. Distribution documents, bon cards, papers, clothing for people in hiding, money from the National Aid Fund and weapons that were robbed by the resistance were spread throughout the country from the café.  Women couriers were used for this kind of work who arrived by train in Boxtel. Gerard knew exactly on which train someone would arrive and on the basis of the color of a handkerchief a signal was given when it was safe to meet. Often meetings were held in the café were allegedly trade in mining timber was discussed. Gerard van der Meijden was experienced in the trade of timber and for that reason knew the Kampina very well.

After the Normandy landings and the advance of the Allied Army Door van der Meijden went back to live with her parents in Esch. Café Royal was significantly damaged by bombardments in the direct surroundings by the end of the war which resulted in business going slow and visitors of the café staying home. She  remembered Sunday 17 September 1944 as the day like yesterday, because then operation Market Garden started and many aircraft flew over boxtel to Son and Arnhem. The aircraft had gliders behind them filled with troops that had to be dropped behind the German lines. Many of these gliders landed too early, partly because the aircraft towing these gliders were shot down by German anti-aircraft fire. Also in the vicinity of Boxtel gliders landed to early and many soldiers ended up in the middle of occupied territory and at the wrong place. Groups of soldiers were brought together by local resistance fighters and hidden in the forest.

Also Gerard van der Meijden took on the opportunity to help the ‘pilots’. "Now they need me", were the last words he spoke before he went on his way. In the weeks that followed Gerard was barely seen in the village of Esch. Often Door van der Meijden received messages from locals that he was oké and that he send his love, tells the Boxtel lady. He once knocked on my parents door with the request to supply as much food as possible. My mother, who had a shop in Esch was unhappy. 'Gerard, you’re killing my business’, she called out to him. But she compelled and supplied goods. So together we left one day for the Kampina. At that time I had no idea where I was taken too.

With two backpacks full of sugar and jam the couple left into the direction of the hideout of the Americans. Fear to be stopped by Germans they did not have. ‘We went for a picknick, would be our answer’ said Door van der Meijden. Once we arrived at fen ‘Meeuwenven’ we were greeted by the soldiers who had hid themselves in deep pits filled with staw and covered with tent fabric. It was quite clear to me that the men were pleased to see someone. The greetings were enthusiastic and at that moment I thought it was very sad that I could not understand and speak English.

Door van der Meijden remembers the look of the unwashed and unshaved soldiers quit well. The cold handshakes they gave because of their stay outside in this environment all this time. ‘It was like shaking a dead mans hand’ she grueling recalls.

On the way back from their visit the van der Meijden couple, who were companied by the Boxtel resistance man Klaas Dekker, were stoppen by a German patrol that was searching for forester Aalt van den Ham. The three experienced some scary moments as is to be read in the notes of Klaas Dekkers diary. Dekker just managed to hide his little pistol within his portfolio.

All these years after her trip to the hiding place at fen Meeuwenven Door van der Meijden recognizes nothing at the location were, until the liberation of Boxtel on 24 October, over one hundred American soldiers were hidden. The four pits and trenches that are clearly visible in the landscape are overgrown with grass. Here and there branches and fallen trees cover the area. Its hard to believe that those young men hid out here, the Boxtel lady says. Also her husband stayed almost continuously in the forest.

The path leading to the hideout is no longer recognizeable and makes it almost impossible to locate the spot. Plans to erect the resistance monument on this location were stopped by the Dutch organization ‘Natuur Monumenten’ who’s aim is to improve the quality of life in the Netherlands by preserving nature, landscape and cultural history. This to prevent lots of people entering this protected part of the Kampina forest and heath. Instead a monument was placed on the edge of the Kampina in October 2003 at street ‘verzetslaantje’ meaning resistance road.

Natuur Monumenten wants to respectfully deal with the place were the liberators of Boxtel were hidden for nearly six weeks. For this reason, the foresters of Natuur Monumenten no longer call the fen ‘Meeuwenven’ but a new name was chosen by them, as they now call it the Parachutistsfen. Gerard van der Meijden was awarded after the war by the American President Dwight D. Eisenhower.

Resistance at Café Royal in Boxtel 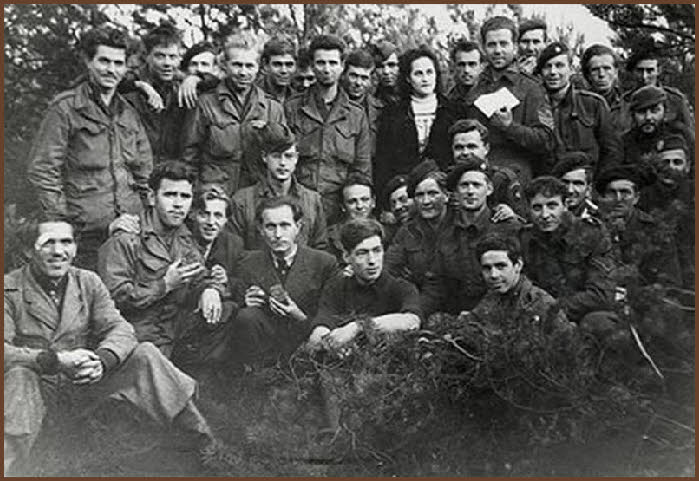 Gerard van der Meijden (lower-left corner with plaster on forehead) amidst a group of resistance workers and American and British soldiers in the Kampina forests.
Home
TOC
Previous
Next