At first light half a squadron of the Scots guards closed up to each of the bridges to open up a twenty minutes bombardment of the hillside beyond the stream. The covering fire of the tanks was accurate and intense. At the same time an artillery concentration came down on Oisterwijk. During this preparation the forward companies of the Seaforth -“A’ on the right, “B” on the left- were moving up towards the two bridges under enemy mortar and machine gun fire as heavy as it had been the night before. By about 7 a.m. these forward companies had closed. Thereupon they rushed their respective bridges with the greatest boldness, killing or capturing all Germans nearby. ”A” and “B” Companies went on at once to clear the areas assigned to them.

By about 9 a.m. they linked up, thus establishing a continues bridgehead with a depth of five hundred yards or so. Meanwhile essential “F” Eschelon vehicles had followed “A” Company over the minor road-bridge (Gemullehoekenweg) to secure the right. “C” Company had crossed over the footbridge (Catharinenberg) to secure the left flank; the enemy was still shelling and mortaring the area fairly heavily. In this action the Seaforth lost 2 officers killed, 3 other ranks killed and 35 wounded, they took 44 prisoners.

The Glasgow Highlanders, who had moved off from their position west of Moergestel about 6 a.m., had been coming up to a forward assembly area in the large woods about three-quarters of a mile south of Oisterwijk, which they reached about 8 a.m. Then the Glasgow Highlanders followed up the Seaforth’s into Oisterwijk. Major Davies sent three of his rifle companies, “C,” “A,” and “B,” across the footbridge, his essential fighting vehicles across the minor road-bridge (Gemullehoekenweg) farther east.

“C” company’s task was to clear the formidable-looking factory area (leather company) beyond the railway; “A” and “B” Companies’ tasks were to advance eastward along the two main streets (Kerkstraat and Hoogstraat/Dorpstraat and Lind) which run parallel to and south of the railway and to clear these to the eastern limits of the town. South of the railway “A” and “B” Companies met no resistance other than shelling and mortaring. 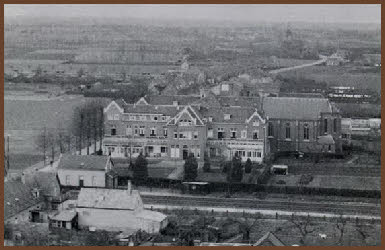 North of the railway, however, “C” Company found a huge convent building (catholic convent for nuns), east of the main level crossing, strongly held and could get no farther.

Major Davies here put in his reserve company, “D” across the railway still farther east, with orders to push through the factory area (leather company) to the northern edge of the village in order to bring cross-fire to bear in the convent.

This “D” company did with complete success, where upon the enemy withdrew altogether from Oisterwijk about noon, at the same time greatly reducing the volume of their shelling and mortaring. As if by magic the Dutch appeared in the streets, bearing very welcome pots of thee.

The catholic convent for nuns in Oisterwijk, Also the roofs of this Oisterwijk  convent had red cross markings on the roof tiles.

The enemy was still in the offing to the northward, but the 7th armoured division and the 51st Division were approaching them from the east and could be left to deal with them. The 153th Brigade of the 51st Highland Division had the 1st Gordon Highlanders in Oisterwijk and the 5/7th Gordon Highlanders in Holleneind, with Battalion in the just liberated village of Haaren.

At about 4 p.m. that afternoon “B” Company of the Glasgow Highlanders and a section of their carrier platoon staged a small joined operation on the eastern outskirts of Oisterwijk, which is of considerable interest, since it was the first occasion on which a Wasp of the 15th Scottish Division went into action. The enemy were holding a strong-point about 400 yards from the houses. Our guns put down a five minutes’ concentration on the strong-point and then lifted to put down smoke farther back, which would screen any positions there might be in depth. As the gun-fire lifted, the carrier section, with its one flame-throwing Wasp and its three Bren carriers, closed on the strong-point under the covering fire of “B” Company. The Wasp scored two direct hits with two squirts on occupied slit-trenches, whereupon all enemy in sight, to the number of about fifty, took to their heels, throwing away their arms. The Brens of the other three carriers did great execution as did also those of “B” and “A” Companies in turn.

The Germans that retreated from Oisterwijk took refuges in fleeing into the direction of the river ‘Bergsche Maas’. At Oisterwijk the Glasgow Highlanders lost one officer, a company commander, killed, and sixteen other ranks wounded. They killed and wounded a great many Germans and took seven prisoners. That same day the Division advanced further on onto the eastern part of the Tilburg city limits and was responsible for its liberation the next day October 27. In Oisterwijk and the surroundings the 15th Scottish Division counted 22 killed and 126 wounded. 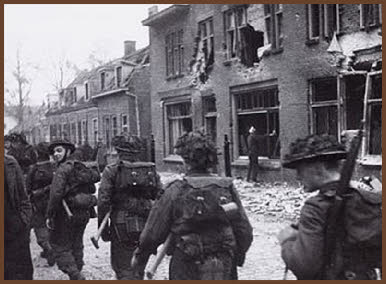 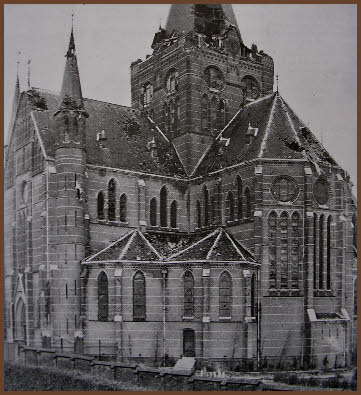 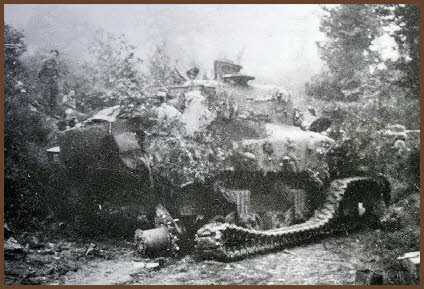 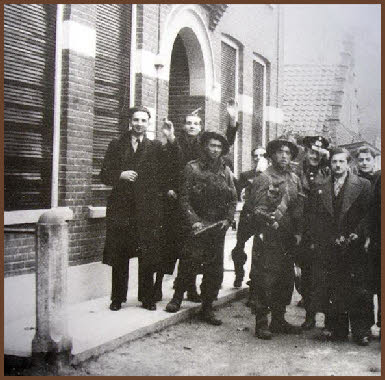 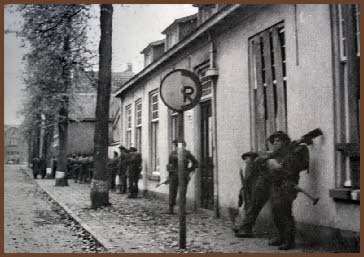 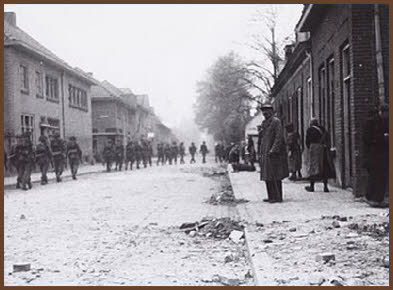 The liberators of Oisterwijk

A disabled Sherman tank in the Oisterwijk woods.
Probably the work of a German mine.
The by mortar and artillery fire damaged St. Petrus church. The bell tower was used as a German observation post and was also occupied by German snipers. German graffiti was left behind in the bell tower but was sadly lost during a large fire in the 90’s. 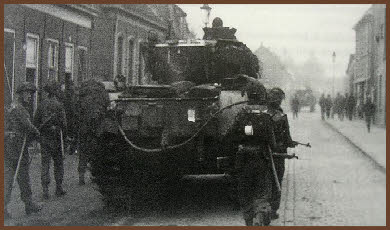 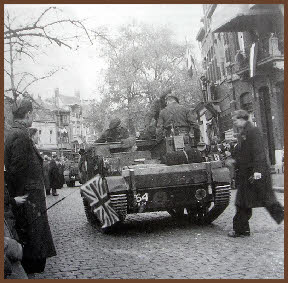 Infantery of the 7th Seaforth Highlanders in Tilburg during the liberation on 27 October 1944.

Brencarrier from the 7th Seaforth Highlanders in Tilburg during the liberation of this town on 27 October 1944.
Home
TOC
Previous
Next
Footage of the Scots advancing trough Moergestel and Oisterwijk during  25/26 October 1944 on their way to Tilburg. (comments in Dutch)