airborne troops in the Kampina

In the afternoon of September 18 1944, day two of operation Market-Garden, again a large armada of transport and glideraircraft passed over Oisterwijk territory.

When heavy German Flak came in to action two gliders were suddenly released in mid-air and floated down to the ground disappearing behind the treeline.

The inhabitants of Oisterwijk that witnessed this event thought that liberation would now come soon and that it would only be a matter of hours until they would be liberated.

Unfortunately the gliders were released to soon, presumably deu to a broken towrope.

The two gliders were filled with airbone soldiers and both aircraft came down at the wrong place.

They landed between Oisterwijk and Boxtel near the edge of the Kampina heather and forest.

Unable to reach their own lines at Eindhoven the airborne troops hid themselves in the Kampina forest.

The group consisted of some 30 American airborne soldiers from the 101st Airborne Division.

The local resistance of the village of Oisterwijk and Boxtel were able to get in to contact with the group and provided them with a good place to hide in the Kampina forest.

As far away as possible from the place were their gliders had landed they were housed in large camouflaged holes dug in to the ground in an area called ‘Huisvennen’ near a moor called Meeuwenven.

By using tent fabric and wooden beams they were able to build a couple of reasonably good shelters between the trees and bushes.

The most important thing for the local resistance was to provide the troops with the necessary food and drinks wich seemed to be a rather difficult and dangerous task.

About one pig was cooked, sliced in parts, and hidden in milk containers to provide the necessary food for the men.

The milk containers were then transported on bicycles to the hideout by resistance members disguised as farmers.

Farmers from the surroundings were willing to help the resistance and offered help in providing the hungry men with different sorts of food.

A bakkery in Oisterwijk provided them with 60 double loaves of bread a day and others provided 20 pounds of butter a day.

Even then there was still a shortage in food while the resistance workers had to explain, that in view of the war situation, there was no need for them to slice the butter for the bread into slices of one centimeter.

After this explenation the soldiers did their best and adepted themsselves to their difficult situation.

Into the direction of the city of ‘s-Hertogenbosch other gliders had also landed prematurely and one of them had come down in an area near the village of Vught.

This glider was also part of the September 18 lift and it landed on the Bergenshuizen estate, near some woods just outside the village.

This American build CG-4A Waco glider was piloted by the American glider pilot F/O. Chester Ritter and was carrying 13 American airborne soldiers and a small mortar.

No one onboard the glider was hurt during the landing and all men were able to hide for a while in the woods surrounding the Bergenshuizen estate.

After some time a resistance worker by the name of Marinus Verhagen, who lived in the village of Esch, was able to contact the troops and bring them to the airborne troops in the Kampina forest at the ‘Huisvennen’ hide out.

Parts of the skeleton and the wheels of Ritters glider were kept in the area at Bergenshuizen for many years by farmers who made good use of these materials after the war.

The wheels of the glider for instance were used as the undercarriage for a flat wagon on the farm of farmer Joseph Hooijman located on the Bergenshuizen estate.

Later that same flat wagon was used by a farmer called Albert Peijnenburg from the village Esch.

He used it as a hay wagon on and around his farm.

For many years the skeleton of the Waco glider was used by farmer Jos van Esch who also lived in Esch.

Farmer Van Esch used parts of the gliderskeleton to build a wooden stable for his new born pigs.

Today these pieces are on diplay in the Dutch WW2 museum, Wings of Liberation at Son near the city of Eindhoven. 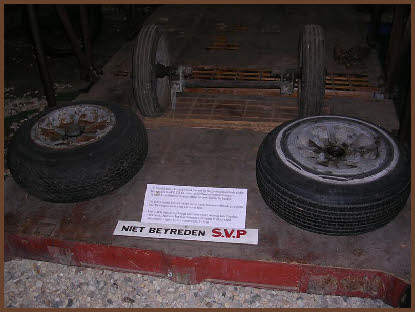 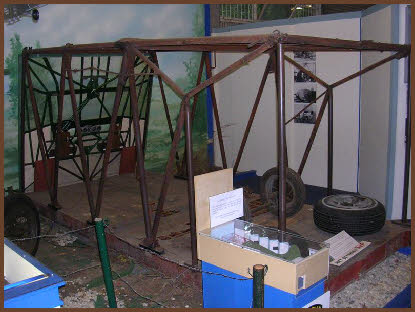 Around that time also a crew of a downed tug aircraft were attempting to stay out of enemy hands.

They were also brought to the hideout at Huisvennen by local resistance workers.

Also men who were onboard other gliders that made an early landing in the area were brought together.

With the help of the Boxtel resistance they were all put into hiding in the kampina at Huisvennen.

This group then steadily grew and after a while it consisted of 46 Americans, one Pole, a Dutchman and 3 British soldiers, generally all airborne troops.

Then in the night of 21 October the Oisterwijk resistance brought another group of soldiers to Huisvennen.

This group consisted of 47 British and American airborne soldiers, amongst them British Red Barrets, that all landed to soon by glider.

They came down near an area of sand dunes and woods named Loonse en Drunense duinen (Loon and Drunen dunes) near the village Loon op Zand.

The Germans were aware of the presence of airborne troops in the area but were not able to locate their hideout despite some search party’s.

The troops remained in their hideout until the end of October when reports came in trough the resistance that the Allied army was advancing on to Boxtel from the east.

The airborne troops were now starting to become somewhat impatient and wanted to do something fast but lacked sufficient weaponery.

Luckily the resistance was able to provide them with sufficient gun power though it was of German origin.

Near the end of October small groups off German soldiers travelling to the rear lines by way of the Oisterwijk woods were attacked by the oisterwijk resistance and under gun point robbed from their weapons, clothing and other belongings and were then kept inprisoned in the woods and on local farms.

Some of this German weaponry finally found its way to the airborne troops in the Kampina forest which substantially increased their firepower.

After reports came trough of retreating Germans and advancing Allied reconnaissance units in their area the group of Allied soldiers decided that it was time to evacuate the hideout and pull out to the village of Boxtel.

During the night of October 24 the group left their hideout and, covered by darkness, walked straight to the village of Boxtel that had been deserted by the German army.

After cautiously entering the village the airborne soldiers were met by a celebrating and ecstatic Boxtel population and they were all greeted as their liberators.

The troops had entered the village just ahead of the Allied army that roled into the village the next morning to find it already liberated.

Until today it’s still not clear exactly how many airborne troops were hiding in the Kampina.

Different sources tell different numbers. There were at least over 100 men hiding in the Kampina forest.

This story is based on information from the Oisterwijk history books;

The report - War above Oisterwijk by Antoon de Graaf 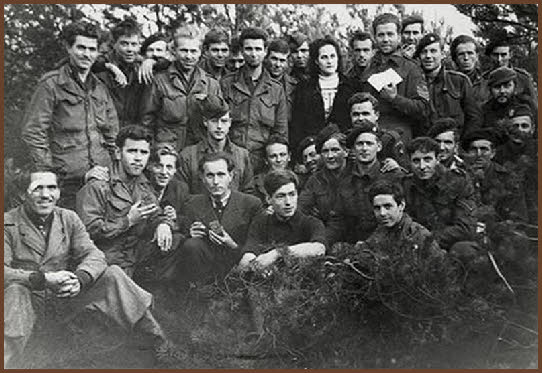 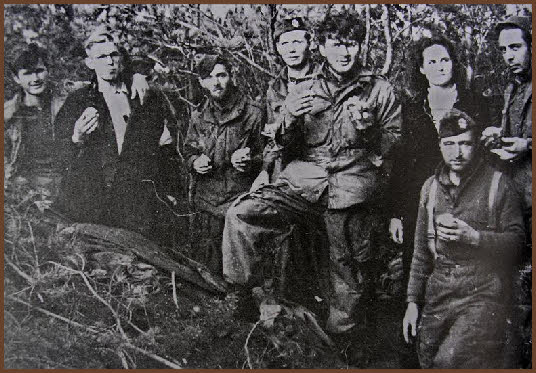 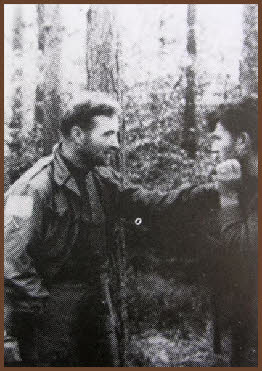 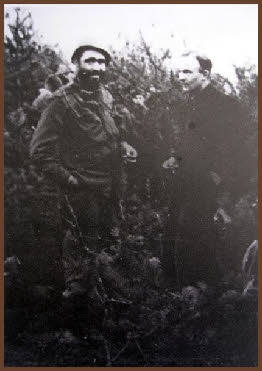 Airborne troops in the Kampina accompanied by several resistance workers 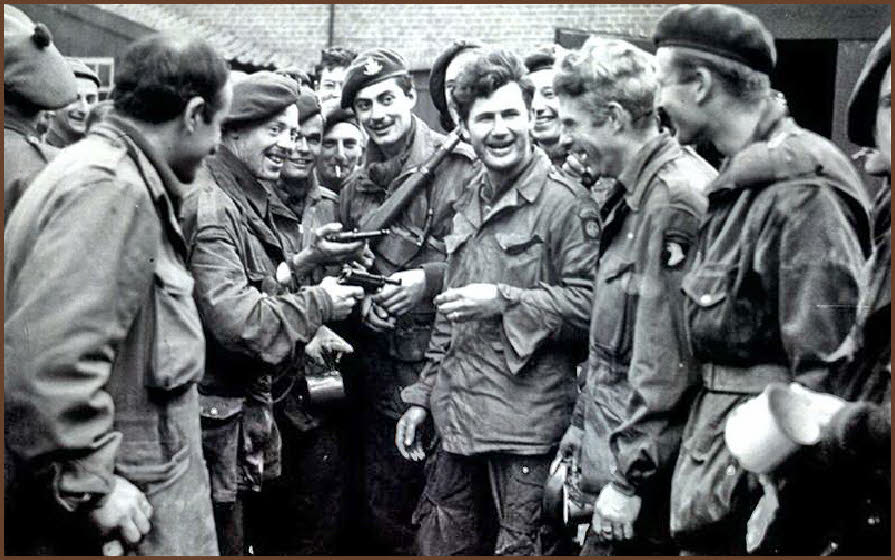 the armed resistance group of Oisterwijk, September 1944.
Some Kampina airborne men show their German weaponry on October 25. This photo, that was on display at the wings of liberation museum at Son for many years was shot near Boxtel. Clear to sea are the airborne patches on the battledresses of the two American airborne men. The trooper to the right is wearing the 'Screaming Eagle’ insignia of the 101st Airborne Division and the trooper to the left the AA,
‘All-American’ insignia of the 82nd Airborne Division. Also pictured in this photo is a British airborne soldier with barret and insignia of the South Staffordshire Regiment.

Airborne evaders of the Kampina forest

Resistance men and women and their associates from Boxtel and surroundings,

as far as could be identified by the author

PRINCIPAL MEMBERS OF THE SUPPORT/RESISTANCE OF BOXTEL

PERSONS AND FAMILIES, SUPPORT AND LOYALTY

Resistance men and women and their associates from Drunen and surroundings,

as far as could be identified by the author

PRINCIPAL MEMBERS OF THE SUPPORT/RESISTANCE DRUNEN

Members of the resistance group André

The book Kampina Airborne is the true story about one of the most unique feats of evasion during World War Two. The story also tells of the courage and determination of the people of the Dutch underground and resistance who risked their own lives and that of their loved ones to help and hide a large number of Allied military men that had been forced to make premature landings by glider or parachute into enemy territory.

During the largest airborne operation of World War Two, as part of operation Market-Garden, not all Allied transport, tug and glider aircraft would reach their designated drop and landing-zones at Eindhoven, Nijmegen and Arnhem. From day one of the operation a large number of airborne troops and aircraft personnel would be forced to make premature landings, far away from their original destinations, in enemy held territory in the province of North Brabant. These military men were not only greatly assisted by the local resistance during their escape by being safely hidden, but in some cases also brought together as a large body of men, ultimately able to participate in the liberation of the area.

Kampina Airborne tells the true 'Market-Garden' story of a group of more than eighty Allied glider-borne troops who were forced to make premature landings in the Dutch province of North Brabant.

Amongst these troops were men of the British 1st Airborne Division and the American 82nd and 101st Airborne Divisions. This book describes the ways in which these men were assisted by the local resistance after they had landed in enemy held territory, who their resistance helpers were, and the places that these men were hidden. The story also includes information about the pilots and crewmembers of the U.S. IX Troop Carrier Command and the British Glider Pilot Regiment who were piloting the aircraft.

All their names are included together with detailed information about the events that took place and their personal experiences during the period that they were in hiding in the area south of the North Brabant capital 's-Hertogenbosch between September 17 and October 26 of 1944.