Perhaps the most important day of the Second World War was D-day on 6 June 1944. That day the Allies landed on the beaches of Normandy in Northern France. This was the turning point in the war. From the beginning of the landings sorties were flown from Gilze-Rijen with Ju.88 en Ju.188’s to drop sea mines in to the English Channel between England and France. These modern mines already detonated as a ship even neared the mine, but they were destroyed in time by the Allies by the many Allied mine sweepers in the channel. The Allies had such a dominance in the air that little was noticeable of German attacks on the invasion beaches ore in land. But German attacks would nevertheless continue until the end of June. By that time at Gilze-Rijen were stationed;

On 5 July 1944 the Allies preformed large scale attacks on German airfields to give the invasion army room to breathe. Gilze-Rijen was the target of 40 American B-17 bombers, again of the 41st Combat Bombardment Wing, 303rd Bombardment Group (H) counting 38 aircraft and of the 384th BG with 2 aircraft that were equipped with radar. The aircraft flew under mission No.196. Coming from the north they flew over a deck of thick cloud towards the airfield. The first group of 20 bombers dropped their bomb load at 09.45 hrs over the airfield consisting of 299, 500-pound bombs. Three minutes later they were followed by a second group of 18 aircraft (two turned around to England because of mechanical problems) that dropped a further 187, 500-pound bombs on the airfield from approximately 25.000 feet. 130 bombs fell on and around the south-west runway with 30 bombs directly on to the runway. More than half of the total number of bombs, about 200, fell on the village of Gilze thereby killing 20 civilians. The damage to the village was huge with many houses completely destroyed. In some streets there was not a single house that was without damage. It was a black day for the inhabitants of Gilze. Though the air raid sirens had sounded no one was expecting an attack on the airfield due to the low cloud cover and contiguous fog clouds. Because of these poor weather conditions the inhabitants of Gilze were under the impression that it were aircraft passing over towards Germany.

On 7 August 1944 the airfield was attacked by 24, B-24 's with bombs being dropped both on and outside the airfield killing four people. Every night missions were flown from Gilze-Rijen by the Germans and during the month of August 20 to 40 aircraft took off in to the direction of France to attack the Allies. In response the British and Americans increased their attacks on German airfields. In the evening of 15 August Gilze-Rijen was attacked by 100 British Lancaster bombers assisted by Mosquito bombers that marked the target with flares. The British bombers bombed the airfield exactly at the right spot, thereby inflicting heavy damage to the runways that resulted in the disablement of the airfield over a long period of time. Almost no bombs were dropped outside the airfield.

On 3 September 1944 the last big attack on the airfield took place. Lancaster bombers supported by Mosquito's and Spitfire's attacked and bombed the airfield. After the Lancasters were gone Mosquito's and Spitfire's again attacked and some of the remaining aircraft on the ground that had survived the first attack were destroyed. On 4 September 1944 the remaining German aircraft left Gilze-Rijen and returned back to Germany leaving behind an empty airfield. Around that time the Germans started with the destruction of most of the facilities. The air defence around the airfield was removed as much as possible and where the Germans were not able to remove their anti-aircraft guns explosives were used to destroy them. Convoys with fully loaded vehicles left the airfield. Ammunition and gasoline depots were destroyed with explosives and Camp Prinsenbosch was evacuated. Many vehicles, horses and farm vehicles in the area were claimed so to carry all the usable goods from the camp on their way out. The buildings in the area where Germans were housed were destroyed with explosives. Fortunately, some civilians were able to talk the Germans out of the destruction of factories and other important buildings.

One could see it was a hasty retreat, because the Allied ground forces were already in northern Belgium. The retreat by the Germans was a relief to the population around the airfield because there were no more German aircraft on Gilze-Rijen. More important, the period of the bombing of the airfield was fortunately in the past. The days that followed were calm with the air filled with slowly over flying Allied aircraft. There was no fear anymore of being fired at by the German anti-aircraft batteries. Those had disappeared or had been destroyed. At one moment everything seemed so quiet and deserted in the area that many people were unable to resist the temptation to go and take a look on the airfield. A lot of stuff appeared to be left behind and the people started to take home everything that they could find that was of use. Rumours spread around fast in the villages arround the airfield that at Camp Prinsenbosch and on the airfield lots of usable goods could be found. Things as German army gear, but also household goods, and even food could be found. The Dutch did not yet realise that the Germans were still in control in the area, and not surprisingly a few days later the Germans ordered that all the goods taken from the airfield and from Camp Prinsenbosch had to be returned or else two civilians would be shot as reprisal. Part of the civilian population obeyed to this order.

It was very dangerous during these last few days, especially for the men outside in the streets. The Germans arrested many men to force them to dig defences like anti-tank ditches for the Germans. A curfew was set and being together in groups of five or more persons was forbidden At the start of September it was clearly visible by the nervous German attitude that the Allies were nearing. But nevertheless the Germans were still holding their main defence line at the Albertcanal in Belgium. Hundreds of bomber and fighter aircraft now passed Gilze-Rijen on a daily basis without resistance from anti-aircraft fire from the airfield. On 11 and 12 September the destruction of buildings and infrastructure at the airfield proceeded. During these two day’s explosions of dynamite charges could be heard all day long.

Then came 17 September 1944, the day of the Allied airborne landings at Eindhoven, Nijmegen and Arnhem. Operation Market-Garden had begun and early in the morning the air was filled with fighter aircraft. Typhoons, Mustangs and Spitfire's flew all around in search for enemy ground targets. Soon after a large group of P-47 Thunderbolts passed Gilze-Rijen followed by waves of Short Stirling light bombers a few moments followed a group of Thunderbolts followed by waves of C-47 troop carrier aircraft. These aircraft were filled with paratroopers on their way to the Market-Garden drop-zones. The entire population was standing outside watching this most impressive spectacle. Operation Market-garden was in full swing, and later on hundreds of glider towing C-47’s and glider towing Stirlings came over Gilze-Rijen to the east and for three long hours the air from west to east was filled with overflying formations of aircraft, briefly followed by aircraft that came back again from the drop and landing-zones on their way back to England. Near the airfield a C-47 lost his CG-4A Waco glider which a short time later landed near the village of Hulten. The troops from the glider were able to leave the aircraft unharmed and were seen engaging the Germans almost immediately. Then the airborne men managed to escape German captivity.

On 18 September, a rainy day, the Allied troop transports by air continued. One of the escorting Thundebolts was seen hit by enemy ground fire leaving the pilot no other choice than to crash-land between the villages of Gilze and Riel. Three other fighters constantly circled the area flying low over the Germans to keep them on a distance so that the pilot could escape. Five weeks this pilot was hidden in Gilze until the village was liberated in October by the first Polish Armoured Division. This division had crossed the Belgium Dutch border near the village Baarle-Nassau and had come from the direction of the village Alphen. A day later British troops liberated the village of Rijen with the Greys and the Royal Dragoons who had advanced from the village Goirle near the city of Tilburg. The municipality of Gilze-Rijen was rid of the Germans and the population celebrated their freedom. Now a start could be made with restoring, repairing and cleaning the area. 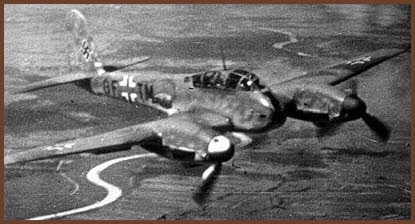 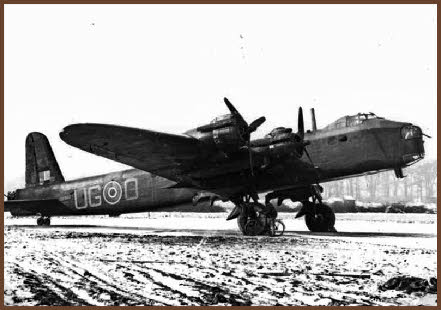 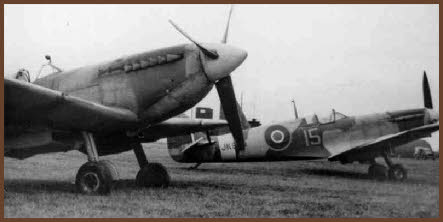 Above; Two British Supermarine Spitfire’s on an airstrip in England.

Left; a British Short Stirling. One can really tell the size of the aircraft comparing it to the cyclist besides the landing gear.