Already in the first year of the war the Germans began to realise that it was dangerous on the airfield for ground personnel because of the British air attacks. For this reason they searched for a location to locate a facility for their ground personnel. They found a suitable location at a forest located along the road from Gilze to the village of Chaam. This forest, locally known as ‘Prinsenbosch’, and located along the road ‘nieuwe Maastrichtsebaan’ would become the location for a newly to build camp. The work started in the spring of 1941 and against the edge of the forest and in the forest itself buildings were constructed. The camp would be housing kitchens, military administration, food storage, medical care, sleeping facilities and entertainment, all on a safe distance from the airfield. From the village of Gilze power lines and water pipes were laid to forest ‘Prinsenbosch’. The buildings were build to look like farm houses and shacks. The walls were made of 25 inches heavy concrete with floors made of 6 inches reinforced concrete with windows covered by steel shutters. The camp was enclosed by fence work and guarded by sentries with dogs. There were two exits, one at road Chaamseweg and one at road Hoogstraat. It was firmly and well build and from the air it looked like it was a farmers village. During the entire war the camp was never attacked by enemy aircraft. The enemy was more focused on the enemy anti-aircraft and perhaps that is the reason why ‘Camp Prinsenbosch’ was never attacked. After the war ‘Camp Prinsenbosch’ was kept in use as a military facility for to the airbase until 1993 and today it has another destination.

To properly organize transportation to and from the airfield for military personnel a small railwayline was constructed by the Germans. The driver of the train was a civilian. Often the little train became derailed by sabotage and the Germans therefore threatened the locals with heavy sentences if someone would get caught. The line was constructed in 1942 and ran from ‘Camp Prinsenbosch’ along the road Chaamseweg all the way to the ‘Bavel’ airbase gate, named after the village of Bavel. The Germans adopted the little train ‘Der Fliegende Hollander’ (The Flying Dutchman) but she was also referred to as ‘Elias’. The trains end station was located on the previous location of airfield Molenheide. Here was also the end station of the little railway line the Germans had in use which ran from the village of Rijen.

German officers enjoy a trip on the railway line from Fliegerhorst Gilze-Rijen to ‘Camp Prinsenbosch’ with a sign market ‘WC’: Winston Churchill/Waist Closet. 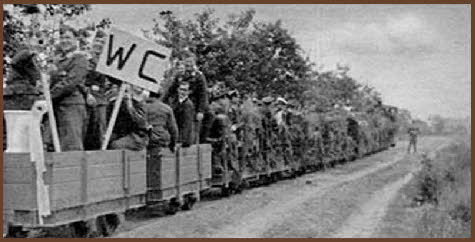 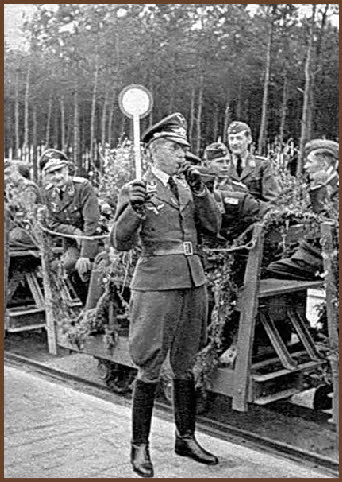 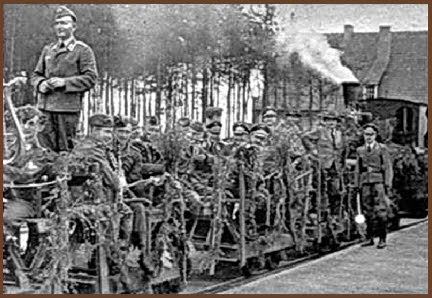 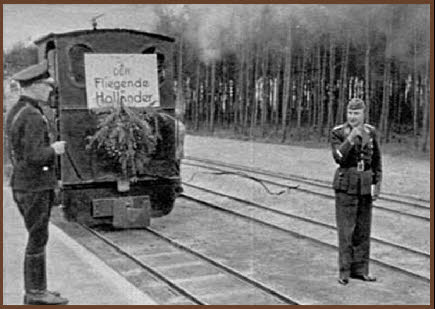 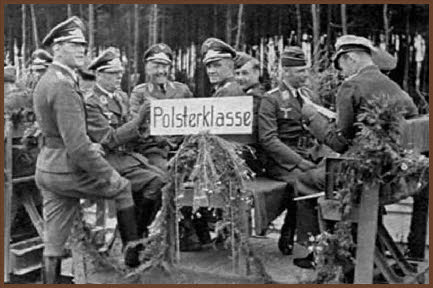 Like many places where the Germans had chosen to build an airfield, they built a fake airfield near the real field for safety reasons. A couple of miles from Gilze-Rijen, along the railway line from Tilburg to Turnhout in Belgium locally called ‘The Kiek’, the Germans build their fake airfield. They called this fake airfield, SF 37 Kamerun (SF = Scheinflugplatz). It had the shape of a proper airfield with runways, taxiways, lighting and  with fake aircraft made out of wood that were mechanically propelled. A reinforced bunker was built to control the airfield and for housing the guards. Its understandable that this fake airfield was of great value and importance to the Germans. When reports came in of approaching enemy bomber formations the fake airfield was lighted up with plenty and movement of fake aircraft along the taxiways. All the time the bomber formations were overhead or an allied attack was expected Fliegerhorst Gilze-Rijen was covered in darkness. Sometimes this even resulted in enemy bombs being dropped on the wrong airfield. Like on 7 August 1940 when bombs were dropped on Kamerun and on 20 October 1943 with an attack by American bombers. After the war the airfield was in use as a Dutch Air Force listening post for overpassing aircraft. Today nothing is left of the fake airfield except for a small German bunker, some remnants of small buildings and a monument, a large steel model of a German fighter aircraft. 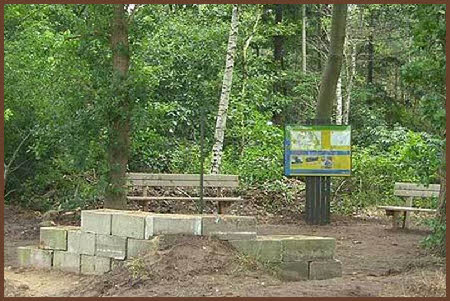 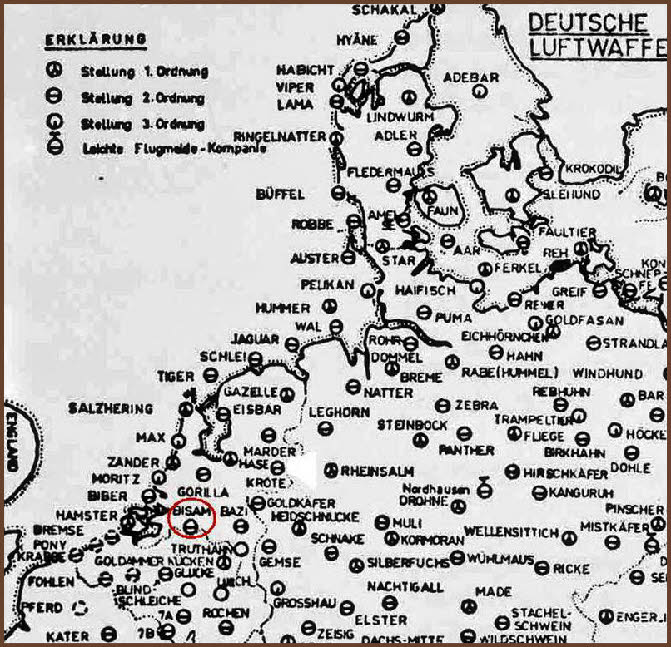 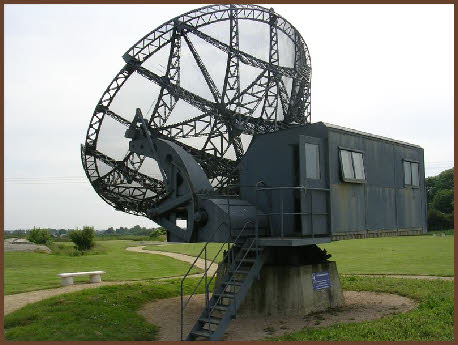 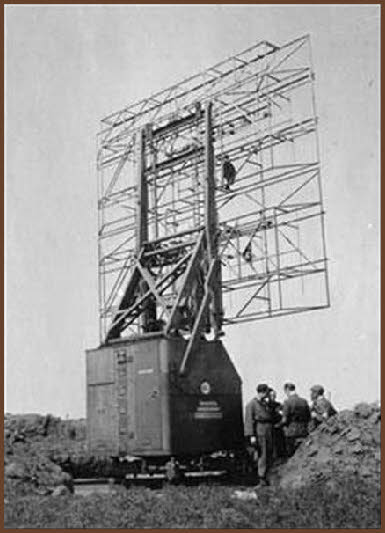 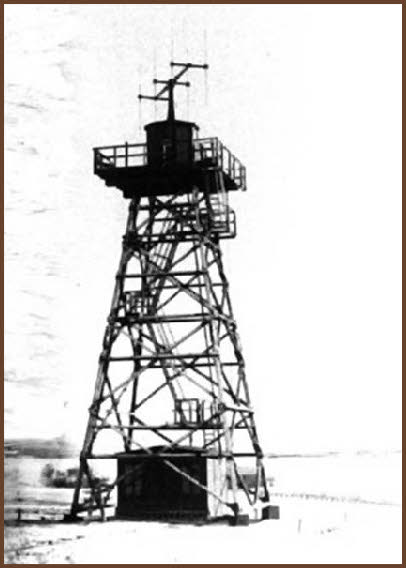 The monument dedicated to Camp Bisam at Strijbeek in 2007.
Freya radar antenna.
Y-line/detector
Würzburg Riese radar antenne in Douvres-la-Délivrande, Normandy.
A part of the German ‘Himmelbett’-system.
Home
TOC
Previous
Next

This German camp was build in the spring of 1943. In the second half of March a large number of German trucks drove up the road Goudbergseweg in the village of Strijbeek, near the Belgium Dutch border, to unload a huge amount of materials that were needed for the construction of the camp. Camp Bisam was a sizable undertaking. All the farmfields along the road were clamed and tall barbed wire fencing was placed. After this they started building barracks. Also a little office, a waiting room, a dining room and a kitchen were build along with a large barrack were personnel could sleep. The little office became the domain of the German Oberfeldwebel Sabottka, by locals named  ‘The ‘Spies’. He was known for his brutal and unmannered attitude, especially against the inhabitants of the village Strijbeek. They had to help with the construction of the camp and later also with construction work in the camp itself. People living in the vicinity also had to help with the construction of the two radar installations (Würzburg-Riese). These installations were centred on big concrete constructions. The work was heavy and done in miserable conditions. The guards were very strict and being present in the surrounding area without a valid reason was reason enough for the Germans to arrest and deported someone to Germany to work for their war effort.

The camp was given the name ‘Bisam’ and it covered an area of 116 acres. The camp was a forward radar and radar tracking/listening post for Fliegerhorst Gilze-Rijen. Camp Bisam was a category 2 station and stationed here was unit II/13. ‘mittlere Flugmelde-Leit Kompanie’/ LN-Rgt 223, (medium aircraft observer-company). A German category 2 station consisted of 1 ore 2 Freya-rectangular antennas with a range of 125 miles, 2 Würzburg-Riese parabolic antennas, 2 Y-lines/detectors, 1 radio beacon, 1 light beacon and a radio transmitter. The Germans had a chain of radar posts to cover their territory from the north all the way to south and called it their ‘Himmelbett-system’ The system covered the country's of Denmark, Northwest-Germany, the Netherlands, Belgium and France, al the way up to the Swiss border. Camp Bisam had a direct telephone connection with airbase Gilze Rijen. There were two radar antennas with a diameter of 25 feet. These were the so-called ‘Würzburg-Riese’, hollow antennas that were able to track aircraft up to a distance of approximately 45 miles. Many different antennas were set up that were manned 24/7. Because of this radar post the Germans were able to track down many aircraft over a large distance. The post was also situated along the route the Allies used from England to bomb Germany. Because of this early warning system the Germans at airfield Gilze-Rijen were warned in time if an attack was coming their way. As soon as Camp Bisam detected Allied aircraft over the Netherlands fighters took of from Gilze Rijen to intercept them. This worked very well for the Germans as long as the underground did not sabotage the telephone lines to the airbase. This happened very often in the beginning when Camp Bisam was only just operational. To protect the telephone lines that stretched into the direction of the airbase civilians were ordered to help and guard the lines. Threatened with deportation to Germany these civilians were forced to do this work. Because of this measure the sabotage actions to the line were stopped so to prevent that fellow countrymen who where forced to guard the lines where not brought in to trouble. Camp Bisam was often attacked by Allied aircraft and sometimes to such great success that the camp could not function for weeks. At the end of the war Camp Bisam was changed to total ruins. Almost nothing is left of Camp Bisam today except for a couple of small concrete objects. Most of the area were the camp was situated is now a days farmland. A monument as a reminder to the camp and the horrible period for the locals was erected in 2007. It is located on the Strijbeek heath, along the road kilometerbaan in the corner of the forest and on the edge of Strijbeek. 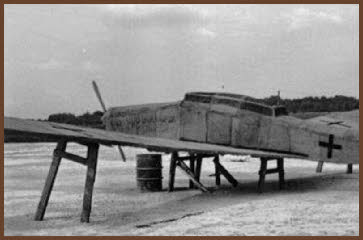 A couple of pictures of fake German aircraft constructed from wood and timber that the Germans placed on their fake airfields. 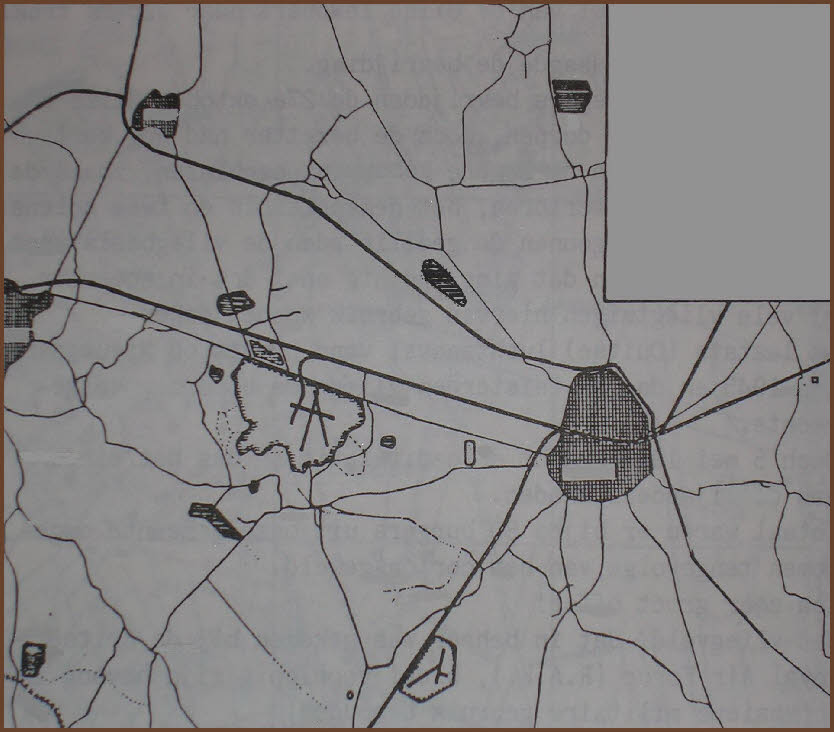 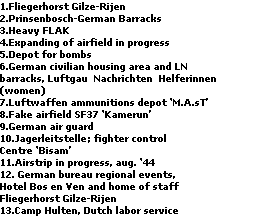