This airbase is situated on the former heath and airstrip called ‘Molenheide’ located between the villages of Gilze and Rijen in the province of North-Brabant. The airbase is also situated between the city’s Breda and Tilburg and was initially used for civil aviation, but also the military aviation, active in the Netherlands  since 1913, made use of it. When the first World War broke out the Dutch military aviation became more and more active on Molenheide so at the end of 1930 the civil aviation founded airfield Nerhoven situated more to the east. During the mobilisation in the Netherlands in 1939 the airfield became military property but was soon after disabled by the Dutch military to prevent that the German enemy would land their aircraft here. During the Second World War the airfield was used by the Germans and build into one of the biggest German airfields in Europe. The Germans also constructed a fake airfield nearby that was named ‘De Kiek’ but referred to as ‘Kamerun’ by the Germans. ‘Kamerun’ was located between the villages Alphen and Riel along the road Oude Tilburgseweg.

On 10 May 1940 between 04.00 hrs and 06.45 hrs Molenheide was attacked by Heinkel He.111’s of the German unit KG4. During this attack many Dutch military aircraft were destroyed though several managed to escape to airfield Heemstede in the Dutch province of zeeland. During the attacks the French troops that where in the area and allies to the Dutch were under continues attack by German Stuka’s. The French troops withdrew themselves to Belgium followed by Germans forces occupieing the airfields Molenheide and Nerhoven on May 13. They immediately started to remove obstacles and barriers that were placed on the airfields to hinder the Germans and they prepared the airfields to receive the first German aircraft. Those aircraft landed that same day and comprised the Henschel He.126 and the Fieseler Fi.156 “Storch”. A day later on 14 May German Donier Do.17 light bombers and Junkers Ju.52 ambulance aircraft landed on the airfields.

It became quit evident that the Germans, by spying before the war, were well informed and aware of the possibilities both airfields offered them. Immediately after their main force had passed in to the direction of Zeeland and the Moerdijk bridges to cross into the heart of Holland they brought in the people, equipment and materials from Germany to turn Molenheide and Nerhoven into a fully operational airfield. Within one day the German airfield was operational and thus gave the Germans the advantage of an airfield close to the frontline's were they had light bombers, reconnaissance and ambulance aircraft directly to their disposal. 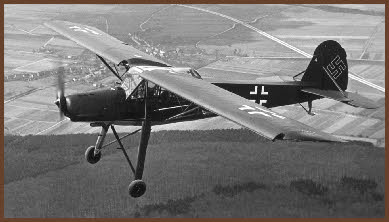 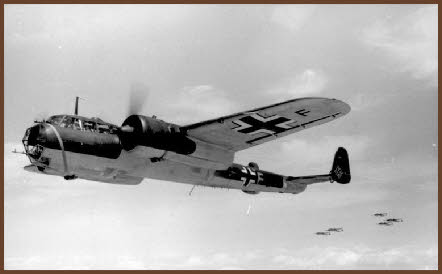 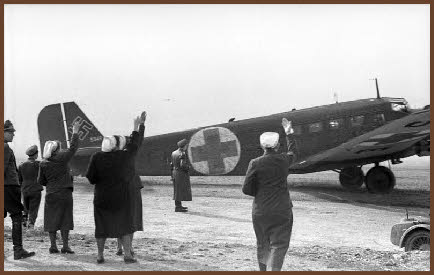 In June of 1940 the Germans began to expand what they called "Fliegerhorst Gilze Rijen". They immediately clamed local farms and fields in the area and many people were forced to move and seek shelter somewhere else leaving behind most of their possessions. It was clearly visible that the Germans were going to undertake a huge project. They began with the construction of three runways of 3000 feet long and 55 yards wide of which two runways were extended up to 5300 feet later during the war. These two runways are still in use today and are named 10/28 and the 02/20. To the north at the village of Dongen a big supply depot was build along the Wilhelminacanal were the materials for the construction of the airfield were shipped to. Big maintenance halls, the so-called ‘Junker-halle’, were built on the airfield, and later in 1941 the even bigger ‘Oberhalle’ was build. These halls were still in use after the war. The ‘Oberhalle’ was built after the ‘Junkerhalle’ had become too small for all the maintenance. It was build along the road Molenschotsedijk and was 328 feet long and 196 feet wide. Here maintenance could be done to up to 10 to 15 aircraft. It was so well camouflaged that it was hardly visible from the air. The ‘Oberhalle’ was built on a small light collared dirt road. This small dirt road was painted across the roof and across the platform situated in front of the building. After adding camouflage nets and bushes she was  made unrecognisable from the air. In addition the Germans also build many ammunition bunkers and other buildings that were needed for a big and modern airfield. For their aircraft the Germans build special bomb and shrapnel free parking spaces of which some are still to be found on the airfield today. The many hangars and workshops and maintenance buildings were build to look like farm buildings. The Germans were masters in concealment and everything was well camouflaged. Looking on the base from the air one had the impression of dealing with a farmers village. The total area of the airfield was much bigger in size than what the airbase is today.

Throughout the entire airfield taxiways and roads were constructed and south of the village Hulten and south-west of the runways the Germans build approximately 95 wooden hangars. By January of 1944 another 75 hangars were build in the vicinity of the area "Prinsenhoef". Concrete parking spaces to shelter the aircraft were built in the edge of the treeline surrounded by sand covered sidewalls. The Germans also constructed a railway line from the Rijen train station to the airfield for transportation of supplies, equipment and petrol. In the line of the runways a radio beacon and light masts were placed for a clear approach navigation. Red navigation lights were placed on high buildings such as factories, churches and wind mills. In September most of the constructions were finished so the Germans had build a complete airfield in only four months. The two airfields were now build into one big German airfield. For the people of Gilze and Rijen this meant that traveling between the villages had become rather difficult and they were forced to make a large detour to reach their destination. 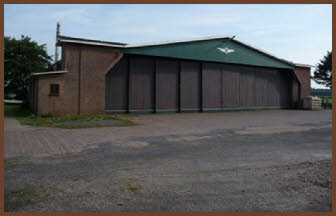 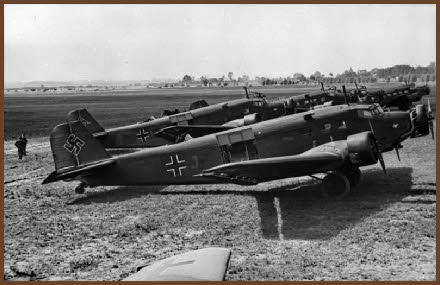 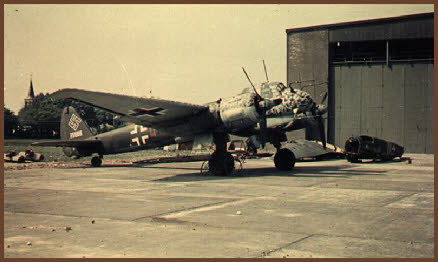 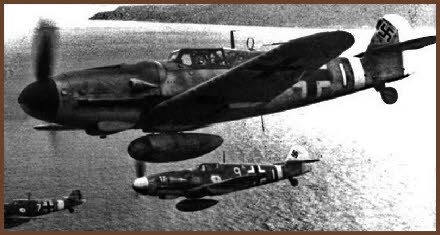 On 2 September 1940 the II/KG26, (KG, Kampfgeschwader=fighter squadron) arrived at Gilze-Rijen from Norway with Staffel 4,5 and 6 (staffel/St=unit) totalling 40 aircraft. This geschwader copromized Heinkel He.III bombers. They carried ‘geschwader’ squadron code 1H and was named the ‘Lowen-geschwader’ Lion squadron. They were only based at Gilze-Rijen for one moth and mainly used for bombing raids on Londen. These raids took place both during the day and during the night. On 4 September 1940 one of the units bombers crashed in the village of Gilze. A Heinkel.III of 6 ‘staffel’ took of during the evening on the north-south runway, fully loaded with bombs and fuel for a raid on England. During take off the Heinkel lost altitude fast and crashed on café ‘De Kronen’ in street Nieuwstraat in Gilze. Eight civilians, four crew members and a couple of German soldiers were killed in the crash. It would be one of the many terrible events that the population in the area around the airfield had to endure during the course of the war. In August 1944 again several Heinkel He.III’s were based on the airfield. They were stationed in the south-west corner were also the hangar was located were the V1 flying bomb was mounted on these aircraft. The Germans used their converted Heinkel He.III, referred to as H-22, to mount the first V1 flying bombs under the wing to launch the weapon during flight. One of those He.III’s, the H-22, reportedly was lost near the airfield after it crashed on its way back from an attack on enemy territory.

During the end of September 1940, II/KG30 arrived at Gilze-Rijen consisting of Junkers Ju.88 fighter bombers. The geschwader code of KG30 was 4D. Also nightfighters of I./NJG2 (NJG=Nachtjagdgeschwader)  with code R4 arrived on Gilze-Rijen in September. This unit flew the Donier Do.17, the Messerschmitt Bf109 and the Junkers Ju.52 aircraft. Every day and night dozens of aircraft fully loaded with bombs took off heading for England. Lots of aircraft were shot down on the way to and back from England or were lost near the airfield. Many were also lost during take off and landing on Gilze-Rijen with 40 German aircraft crashing on and around the airfield between September 1940 and April 1941. Around the airfield the Germans had installed lots of anti-aircraft to protect the airfield. The RAF regularly attacked the airfield which sometimes resulted in a British aircraft being shot down by the Germans. But in the end more German than RAF aircraft would be lost around the airfield. In May 1941 Germany began its war against Russia causing many bombers to leave Gilze-Rijen to be stationed in the East. Though many aircraft had left for the East the German attacks on England proceeded nevertheless and many raids on the enemy were flown from airbase Gilze-Rijen. 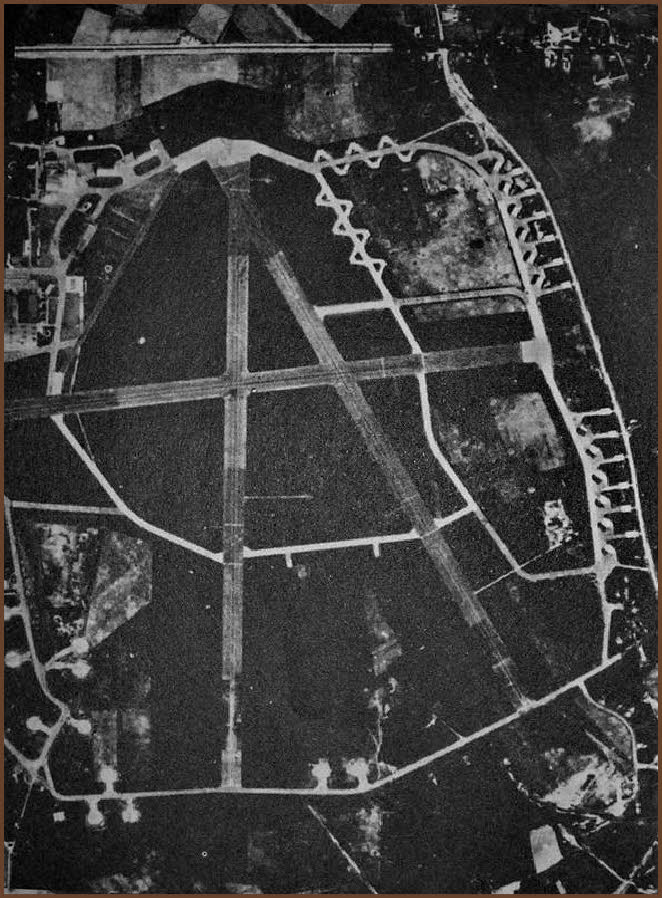 One of the few buildings of the former German fliegerhorst that remained after the war is this hangar. The hangar is in use to store gliders and its situated on the outside of the current airbase alongside the old road from Hulten to Gilze.