Five Crosses in the Graveyard 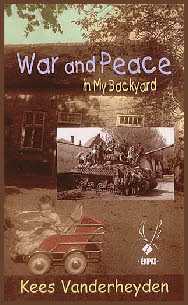 On a fine day in September 1944, we heard a booming thunder of airplane engines so deafening that all the Allies’ previous daily raids paled to mild buzzing in comparison. Also, on that afternoon, the planes were close together and very low in the sky.

This time, it was not the bombers we usually saw, but huge planes towing squarish motorless gliders. These birds of war seemed to brush the tops of the trees as they flew over, so close that we could see the pilots and wave at the crews. It was absolutely incredible and terribly exciting.

The German anti-aircraft guns snarled ceaselessly, but the relentless procession continued on its inevitable way to some unknown destination. We were sure that they would come to liberate us on that very day. After the passage of hundreds of aircraft and endless hours of unceasing racket, calm settled over us once more. But we were worried, and disappointed too, because there was no sign of American or Canadian soldiers in our streets.

The Germans were nervous, but still in complete control. Neighbours told us that one of the gliders had been shot down not far from the village. Apparently, some American soldiers had been killed in this accident. We were overcome by despair.

Very early the next morning, I went to the Sint-Peters-Banden church, where I was an altar boy. I saw traces of blood on the front steps of the church. The iron gates to the graveyard were open. German soldiers in the cemetery were busy with wheelbarrows containing long, bloodstained brown-paper bags. And I realized that the bags held bodies that they were going to bury.

The soldiers dug a row of graves near the graveyard gate and threw the bodies into them. What was going on? Who were these dead people? Were they Germans or the Allied soldiers killed the day before when the glider was shot down? No way to know, at the time. First, I had to serve mass, but as soon as the celebration was over, I rushed back out to the cemetery.

The Germans were gone, the gates were still open, and a curious crowd was milling around the newly dug graves. When I got close enough, I saw five wooden crosses with khaki helmets hung on them. Most of the helmets were crushed or damaged. They were not German helmets. It was a pitiful spectacle.

Maybe these dead men were the ones we waved at the day before. Now they were under the ground in our graveyard beside a row of German graves with similar wooden crosses, but no helmets. My heart was breaking as I surveyed this scene. I still had not seen death itself, but I had surely seen the signs of its presence.

Information on “War and Peace in My Backyard”