It is a fact that Doctor Desain had an oval green Willys-Jeep in his possession shortly after the liberation of Oisterwijk in October of 1944. Some older residents of Oisterwijk have explained to me that they don’t know any different that this was the Willys-Jeep from the Waco glider Queen-City. Some have told me that they were always told by their parents that the Jeep was given to the doctor by the Germans, while again others tell that Desain got it from the Allies shortly after the liberation.

But, is this all possible? Would the military authorities at Oisterwijk have allowed the doctor to drive around in a military vehicle? Or even, would they have allowed non-military as a whole to drive around in, or even possess a military vehicle so closely after the liberation? Some of the Oisterwijk inhabitants know the answer. They say that, as credit for his good deeds and courage, which was an important contribution the village liberation, Doctor Desain was allowed to use the Willys-Jeep after the Germans had left Oisterwijk. In any case, doctor Desain drove around in the Willys-Jeep for years after the war and used it for numerous visits to his patients. A very important fact of course for the village, a doctor with fast transportation so closely after the war. Most Dutch transportation like motor vehicles, horses and even bicycles where confiscated by the Germans during their retreat so most villagers were without transportation. If the Willys-Jeep, which the doctor drove around in after the liberation, was the Jeep from the Queen-City, it could perhaps still have done something good for the local population of Oisterwijk and possibly even have at a point saved one’s life.

The doctor passed away in 1959 and what exactly happened to his Jeep is not certain. What is become clear is that it was sold to an unknown buyer after his death. The registration data of the Willys-Jeep is known thanks ‘to the fact that it was pictured in a local history book about wartime Oisterwijk. The small identification number plate with the Jeeps’ serial number and fabrication year that was mounted on the dashboard of every Willys-Jeep was taken by someone as a souvenir shortly after the crash of the Waco glider Queen-City. Thanks to these numbers the Willys-Jeep could one day be identified. Of course, there has to be a match with a serial number stamped somewhere on the chassis, because the original registration plate was removed in 1944.

During my research to the whereabouts of the Willys-Jeep I was told that a local Oisterwijker by the name of Mr Aan de Stegge had bought the doctors Willys-Jeep after his passing. Mr Aan de Stegge was the owner of a little private war museum dedicated to Oisterwijk and its WW2 history. He had a collection of several WW2 vehicles, small aircraft and other war items were on display at the museum. According to what I was told the Willys-Jeep was brought to Oisterwijk at the time that the doctors widow resided in the city of Nijmegen. In this way this Willys-Jeep, that was of particular interest to the buyer and our villages history, was returned to Oisterwijk and placed in a museum. The museum owned three different Willys-Jeeps and all three were on display. One of those was indeed build in early 1944. This particular vehicle was, for some reason, painted in Red cross Colours, red and white. Unfortunately, the museum is long gone, as is its owner who passed away many years ago. It appeared that after he passed away the collection was split up and sold to unknown buyers.

The  identification plate of the Willys-Jeep: 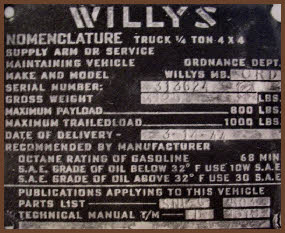 After Oisterwijk was liberated soon the Canadian troops took over the area from the Scottish troops as the Scots had to move on the next day to fight the war in another place. When the Canadians came to Oisterwijk they soon had a ‘leave camp’ located on the grounds of the leather company. This leave camp was meant to refit Canadian troops that would be returning home or send to another area in Europe. There was also medical and dental care in the camp and now and then even some entertain. The oldest daughter of doctor Desain, the daughter that also worked for the Red Cross, had become befriended with a Canadian assistant dentist, who was a sergeant. This Canadian sergeant told her one day that he was in need for transportation to Antwerp to pick up supplies. The doctor’s daughter said she could help him and secretly she borrowed her father’s Willys-Jeep. It was parked in front of the house and for some reason wouldn’t be missed that day. The doctor, who also acted as village dentist, was in the possession of a small dentist case with dentist tools which he always carried in the back of the Jeep. When the Canadian sergeant assistant dentist secretly borrowed the Willys-Jeep the small case indeed appeared to be on the back seat. Before his drive to Antwerp the sergeant first went to the leave camp for a late and highly necessary dentist appointment for a Canadian mechanic in the camp. During the treatment other mechanics took the time to do some repairs on the Jeep because it was in a rather sorry state. After the patient was treated the sergeant drove to Antwerp to pick up his supplies and later that day returned to Oisterwijk. He parked the Jeep back in front of the doctors house without it ever being noticed that it had been gone that day. The next day, without any assumption to the fact the Jeep was borrowed the day before, the doctor took his Jeep for a drive. Later that day the doctor would mention that the Jeep handled and felt totally different than it had done before.

Pictured to the right a Willys-Jeep that was commonly sighted in Oisterwijk in the 80’s. In remembrance to doctor Desain an Oisterwijk villager restored a Willys-Jeep and named here the “Dr De Sain Jeep”. Locally the Jeep was named the “doctor Desain Jeep”. After research I found that this was not the Willys-Jeep from the glider Queen-City,nor the jeep the doctor drove, but a different one, a 1942 model. The picture shows the “De Sain” Willys-Jeep in front of a Oisterwijk Red Cross building named the Dr de Sain house. Noticeable is the way the family name is written different during those days. 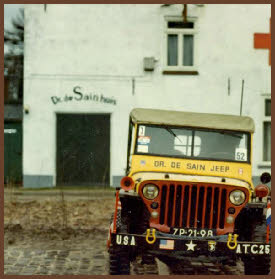