The following is an extract made up from a report about the crash of Capt. James ‘Jim’ K. Hunter dictated in his family website.

‘Four days prior to 18 September the 491st stood down from flying further missions as they received orders to practice in flying at low altitudes as close to the ground as possible. They were preparing for a special mission in which they would be required to familiarise themselves in flying at tree top level and drop supplies to allied forces on the ground. It was almost 18 September when the 491st discovered that they were going to play a role in the first major offensive since D-Day. The operation was called Operation 'Market-Garden’ and was a combined allied plan conceived by the British Field Marshal Montgomery in which allied forces would be dropped behind the German lines by parachute in an attempt to push the German army out of Holland. Operation Market-Garden would involve about 3.630 aircraft, 1.635 gliders, 30.480 troops, 1.000 vehicles, 460 artillery pieces and around 3.600 tons of equipment which would be dropped by parachute or flown in by glider into Holland. If all went as planned, these troops would be joined by existing ground troops within a few days that were approaching from the Belgium border and would then together push the German army to the east across the river Rhine. During their training for this mission the pilots and their crews had the feeling that this mission, as the men called it, would be a ‘Milk Run’, an easy mission. Market-Garden would go down in history as the Battle of Arnhem or ‘a bridge too far’. it was the largest airborne operation in history and the only defeat for the allies in North-West Europe.

Market-Garden began on 17 September when 875 B-17 bombers were used to attack and destroy 117 German Flak batteries and installations in Holland. Then 20.000 soldiers of the 1st Allied Airborne Army were brought in by 2.080 aircraft and dropped by parachute and gliders behind enemy lines. In order to secure the unarmed transport planes, they were escorted by 503 U.S. and 371 British fighter aircraft. This armada of airplanes stretched over 94 miles in length and three miles in width flying at an average altitude of 1500 feet. Once over their destination Holland the aircraft descended to a height of approximately 500 feet for the droppings. Paratroopers of the U.S. 101st Airborne Division were dropped north of Eindhoven, the U.S. 82nd Airborne Division was dropped to the South of Nijmegen and the first British Airborne Division was dropped close to Arnhem. The average time that was flown over German territory and German anti-aircraft was approximately 40 minutes. A second transport consisting of 2.458 transport aircraft escorted by 867 fighter aircraft took place on the following day 18 September with a second group of troops, gliders and supplies being dropped on the drop and landing-zones in Holland. Immediately after this second transport 248 B-24 bombers of the 8th U.S. Air Force dropped supplies for the 101st and 82nd Airborne Division. Forty of these B-24 bombers came from the 491st BG. Instead of carrying bombs their bomb compartments were filled with medical supplies, communications equipment, ammunition, food and fuel. It was the first time that heavy bombers were used to drop supplies on to the battlefield on a very low altitude.

In the morning of 18 September at 09:30 hrs a briefing was held for mission 71 at North Pickenham airfield. The Hunter crew was selected to lead a group of B-24’s to Eindhoven, Holland to drop supplies for the 101st Airborne Division. As the lead plane of this group it was required that a group’s Operations Officer would be onboard and several men wanted this position. The final decision was made by a flip of a coin with Captain Anthony Mitchell of Poland, Ohio replacing Lt. Raymond Toll as co-pilot. It was also necessary that a drop master would be onboard to supervise the droppings of supplies by parachute and Private First Class- George E. Parrish from Durham, North Carolina was temporarily assigned to the Hunter crew. However, two members of the original crew, Palmer and Walburg did not make the flight, possibly due to illness or injury. Nose gunner, 1st Lt. William H. Byrne from Bellmore, New York was added instead to fill in the ranks. Byrne normally flew aboard the ‘Hard Way’ as the navigator in the David Hicks crew. But because not every mission was in need of a navigator on every aircraft Lt. Byrne was behind in his missions. The rest of the Hicks crew already completed their necessary 31 missions to earn a ticket home on 11 September 1944.

After a delay due to fog, take off and assembly in the skies above England finally started at 13:27 hrs and they left the British coast around 14:50 hrs for the 34-minute flight over to Holland. During the trip they were required to complete a 360 degree turn to avoid returning troop carriers of the second airlift. When they reached the Dutch coast around 15:30 hrs they descended to 300 feet and immediately caught anti-aircraft and small arms fire. In less than 15 minutes the aircraft were flying on tree top level at about 150 feet and were able to see Dutch citizens cheering and waving at them. Between the time of reaching the Dutch coast and the arriving above the drop-zone the bombers were subjected to heavy German anti-aircraft fire. They were instructed not to return fire in order to avoid civilian casualties. At approximately 16:15 hrs they reached the dropzone and had to climb up to 400 feet to drop their bundles with supplies of which most fell within the assigned areas. After a successful drop they began their journey home. 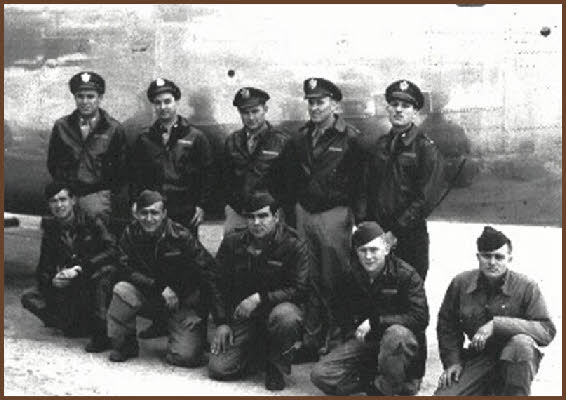 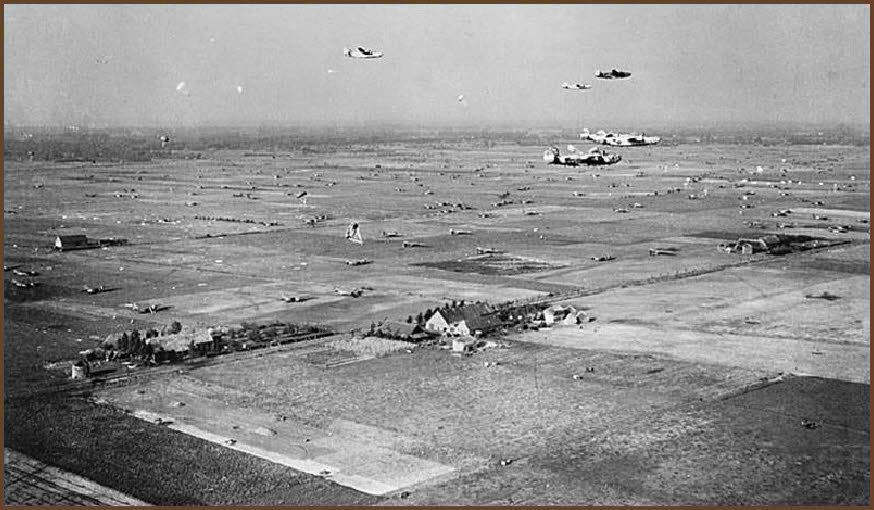 Low over the Market-Garden drop-zones littered with gliders the 491st drop their supply bundels by parachute.
18 September 1944.
Home
TOC
Previous
Next 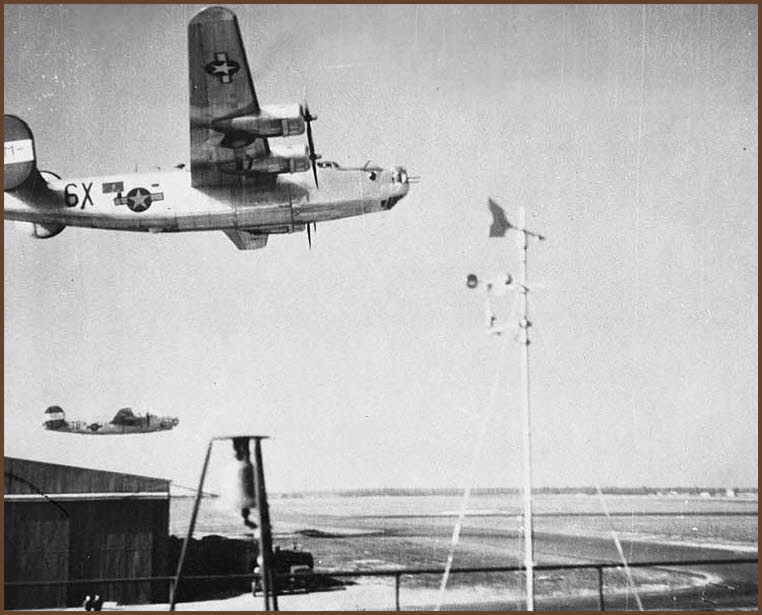