The route connecting Eindhoven to Arnhem was known as "The Corridor" but the paratroopers renamed it "Hell's Highway".

Early in the morning many targets in the Netherlands are being attacked by more than 1,700 bombers and fighters of the R.A.F. Bomber Command, Fighter Command,, the Second Tactical Air Force (2nd TAF) and of the American 8th Air Force. At 09.45 hrs the first of a total of 2,023 transport aircraft and tugs, towing gliders, take off from 24 airfields in England to transport the airborne troops to the landing areas in the Netherlands. A total of 20,000 men, 511 vehicles, 330 guns and 590 tons of material are flown over. Between 13.00 and 14.00 hrs the 1st British Airborne Division is dropped near Arnhem and Oosterbeek, the US 82nd Airborne Division near Nijmegen and Grave and the US 101st Airborne Division near Son and Veghel. 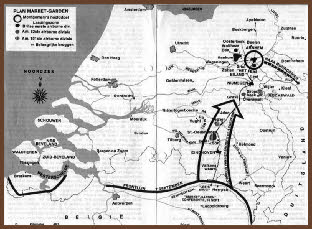 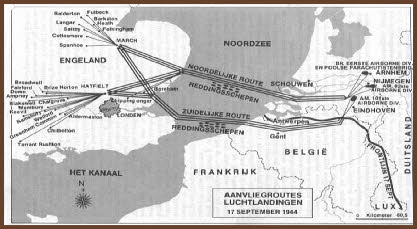 With the onset of fog it is already afternoon before reinforcements and supplies arrive. Near Arnhem British paratroops are advancing to try and reinforce troops at the bridge, but they only get as far as the western edge of the city. Eindhoven is being liberated by the 101st Airborne Division. The first radio contact between the Americans and a patrol of the Guards Armoured Division is made at 11.15 hrs and they make physical contact in Woensel at about 12.15 hrs. In the late afternoon the army arrives in the southern outskirts of Eindhoven. At about 21.00 hrs the British Royal Engineers start building a Bailey bridge across the Wilhelmina Canal in Son.

The British Paratroopers attempting to reach the men isolated on the bridge in Arnhem meet heavy resistance and retire from Arnhem to Oosterbeek after having suffered severe losses. The attempted supply by air near Arnhem fails and a similar operation near Groesbeek and Son is hindered by bad visibility. By 06.15 hrs the 33 meters-long Bailey bridge constructed over the Wilhelmina canal in Son is finished and the army can continue its advance. Market Garden is now already 36 hours behind schedule. In the afternoon the Guards Armoured Division reaches Nijmegen but cannot continue because the bridge over the River Waal is not yet captured. At 19.10 hrs the Luftwaffe starts bombing Eindhoven. 227 people are killed and hundreds are wounded.

The British paratroops on the bridge in Arnhem, although heavily attacked, are still holding out. In Nijmegen the bridges over the River Waal are captured in the evening. Continuing the advance towards Arnhem is pointless because the 43rd Infantry Division has not yet arrived. The Germans attack the bridge in Son but are defeated. Supply from the air is more successful today, especially near Overasselt.

In the morning the Dutch "Prinses Irene Brigade" marches through Eindhoven, on its way to Grave. In Arnhem the remaining para's of the 2nd battalion on the bridge over the River Rhine have to surrender to the Germans after days of heroic battles. The 2nd Army gives artillery support to paratroops in Oosterbeek. The 1st Polish Independent Parachute Brigade under command of Maj.-Gen. Sosabowski is dropped near Driel, south of the River Rhine, but are unable to cross the river. The British tanks cannot advance beyond Elst in the Betuwe and have to wait for the infantry. Supply aircraft are attacked by the German Luftwaffe near Arnhem.

Bad weather prohibits supply by air. The 43rd Infantry Division advances from Nijmegen, but only reaches Elst. A British reconnaissance unit contacts the Polish Airborne brigade. The Germans attack the Corridor between Uden and Veghel from the east and block all traffic for 24 hours. A Brigade of the Guards is sent back from Nijmegen to Veghel to give support to the 101st from the north. At night 50 Polish paratroops succeed in crossing the Rhine and reach the British paratroops.

The weather improves. Reinforcements can be dropped from the air near Overasselt and Son. In the afternoon the Corridor is open once again. The British occupy Elst, but in Oosterbeek the British paratroops are in a bad position. At night about 200 Polish paratroops cross the Rhine once again.

Weather has worsened again. The British paratroops surrounded near Arnhem are getting artillery support from the 64th Regiment medium artillery and later from the 49th Battalion heavy artillery. They are positioned near Nijmegen and cover a distance of 18 km. The British infantry and the Polish paratroops try to cross the Rhine at night, but fail. The British 2nd Army marches on towards Driel in the Betuwe. The Corridor is blocked for a second time by the Germans, this time between St. Oedenrode and Veghel.

During the evening and the night remnants of the British 1st Airborne Division are withdrawn over the Rhine. More than 2,200 men reach safety on the southern bank of the river. The wounded have been left behind. The Corridor remains blocked.

Weather improves considerably. The Corridor is open again, after a blockade of 44 hours. 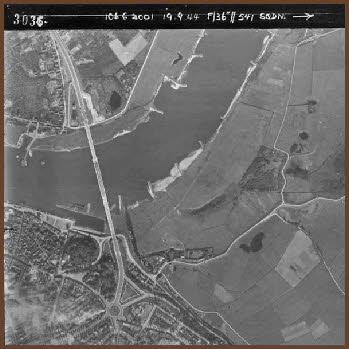 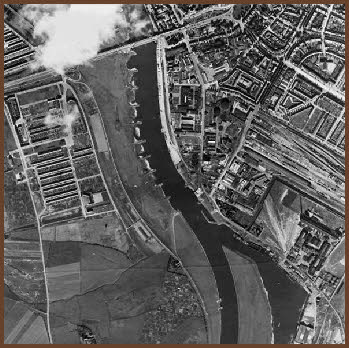 The British 2nd Para Battalion under command of Lt.-Col. J. Frost reaches the northern ramp of the bridge over the River Rhine in Arnhem at about 19.30 hrs and occupies it. The bridge over the River Meuse near Grave is occupied by the 82nd and the bridges in the sector of the 101st are taken undamaged, except for the bridge over the Wilhelmina Canal in Son which is destroyed by the Germans just before the paratroops arrive. After the start of the landings General Brian Horrocks of the British XXX Army Corps gives the order to attack. At 14.15 hrs about 350 guns, positioned in a mile-wide front near the Kempish Canal in Belgium, open fire on the German lines. Tanks of the Irish Guards start advancing from Neerpelt in Belgium at 14.35 hrs but meet with heavy resistance and they only get as far as Valkenswaard. Radio Oranje calls upon personnel of the Dutch Railways to strike in order to stop German railway traffic. 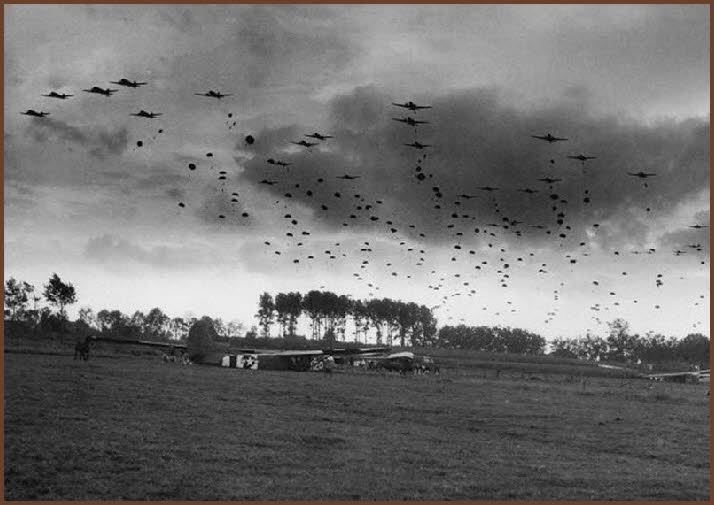