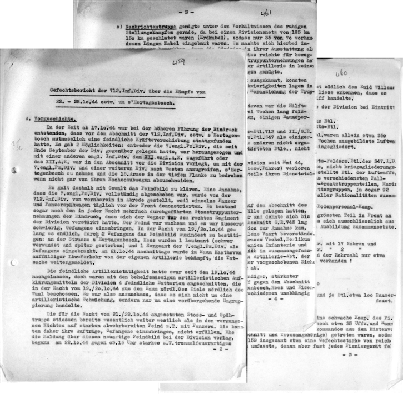 The German documents with the prehistory of the battle.
(Click on the documents to enlarge) 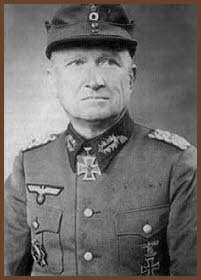 In the period from 17.10.44 the higher command had formed the impression that, before the 712. Inf. Division’s cut off east of ‘s-Hertogenbosch, the enemy presumably had shifted its forces. There were two possible shifts: either the 7.engl.Pz.Div. (British 7th panzer division) which was positioned opposite our Division during late September was pulled back and swapped for a British Inf. Div. added to the XII.A.K.(Army Corps), ore the XII.A.K. changed position in the area opposite our Division to, together with the 7.eng. Pz. Div. and a further added Div. attack further West, take ‘s-Hertogenbosch and threat the 15th Army’s flank if not cutting it off from its supply lines.

Its therefore necessary that the area is cleared from the enemy by force. The assumption that the 7.engl. Pz. Div. had completely moved from the frontline was denied by the 712. Inf.Div. which was daily prominently visible along the front lines with several tanks and reconnaissance vehicles. It was even assumed after multiple shock troop infiltrations during the nights that the opposite side had strengthened their Division’s right regiment. The enemy was alert and it was very difficult to bring in prisoners. Finally it was achieved to have confirmation about the enemy’s situation during the night of 19./20.10.44 trough 2 prisoners: along the road ‘s-Hertogenbosch-Hees a Lieutenant (severely wounded and later diseased) and a Sergeant of the 7.engl.Pz.Div were brought in as prisoners. In the afternoon of 21.10.44 own conspicuous traffic was attacked by own artillery in area Kaathoven, the facts relayed.

The shock and reconnaissance troops deployed in the night of 21./22.10.44 as during the nights before already had encountered strong dug in enemy tank positions further to the west. As a result they were unable to fulfil their objective, bringing in prisoners. When in the end the situation regarding the enemy’s position reached the Division at 03.15 hrs on 22.10.44 a strong thundering artillery barrage started on the area south of the Zuid-Willemsvaart. The intensity of this artillery barrage clearly showed it was meant to clear the way for an oncoming bigger enemy assault.

Therefore on entering the battle the Division should deploy;

a) Infantry of the Div:

In these 4 Btl. were about 350 young, 3 weeks trained Luftwaffe recruits.

3 medium strong, not for battle suited Btl. of the Luftwaffe that were put together from several reserve parachute troops, Marine Batteries, Splinter Groups and even 92  foreigners of all nationalities.

The Feldersatz-Btl. (Field replacement Battalion) of the Div. was for the greatest part deployed at the frontline along the Maas river, although also this Btl. entirely existed of Luftwaffe recruits with only 3 to 4 weeks of military training.

Calculated according to the number of guns only 65% had one ammunition supply available!

As Engineers the Div. only had a weak company Pi.Btl.(Pionier, Engineer battalion)of the 59 I.D. available of which about 35 Uffz. (officers) and soldiers of the old Pi.Btl.712 Nachkommandos (rear guard of the wehrmacht) from the coastal defense were added to fill in the ranks so the 1./Pi.Kp.159 (Kp, Corps) all together existed of a force of more than 100 men, though lacking almost every engineering equipment.

e) Communication troops were sufficient in relation to the sort of battle, and because 150 km of 185 km Division network was in use (by ground cable) only 35 of the 70 available length of cable was to be installed. During this it became more and more eminent that the Division was more equipped as a ‘Bodenständige’ Division (troops without sufficient transportation to move around on the battlefield). This was not sufficient for easy movement on the future battlefield. During former performing on the battlefield, it became evident that the communication equipment was not up to the job it was intended to.

f) Supply troops and transport troops had shrunken badly and could hardly fulfil their tasks. The problem was the lack of sufficient heavy transport for heavy loads that was only partly solved by collecting most of the troop transports from the area.

The Division was cut off over a wide area of 27 km of which half was very difficult for tank movement. The positions were further built out and fortified during the past three weeks. Aside from 400 T- and 1000 S-mines and several barriers from cut down trees no other obstacles were constructed.

The fear for the enemy armor could be called overcome at Fusilier-Btl.712 and II./G.R.745 (Grenadier Regiment) while at I./G.R.732 and Felders.Btl.347 the fear could be called partly overcome, while the other poorly organized, in battle not hardened Battalions, could be referred to as not ‘armor hard’.

It cannot stay unmentioned that the Division has lost 20 Infantry-Regiment and Btl.-commanders since May 44, with the result that commanders on 22.10. for the greatest part were not experienced enough and up to the job during their period of command.

TRANSLATION OF THE GERMAN DOCUMENTS