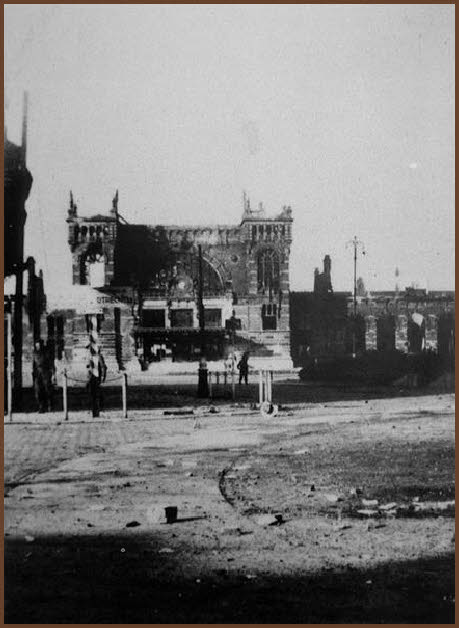 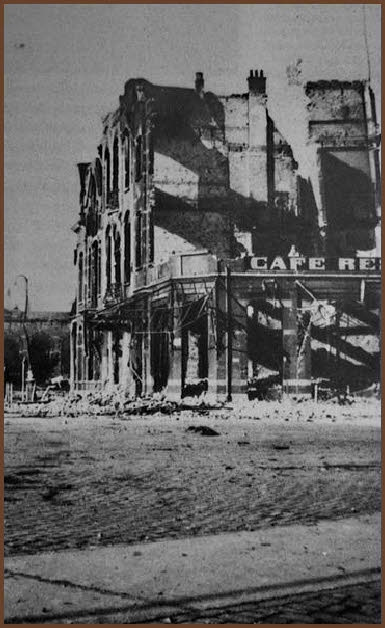 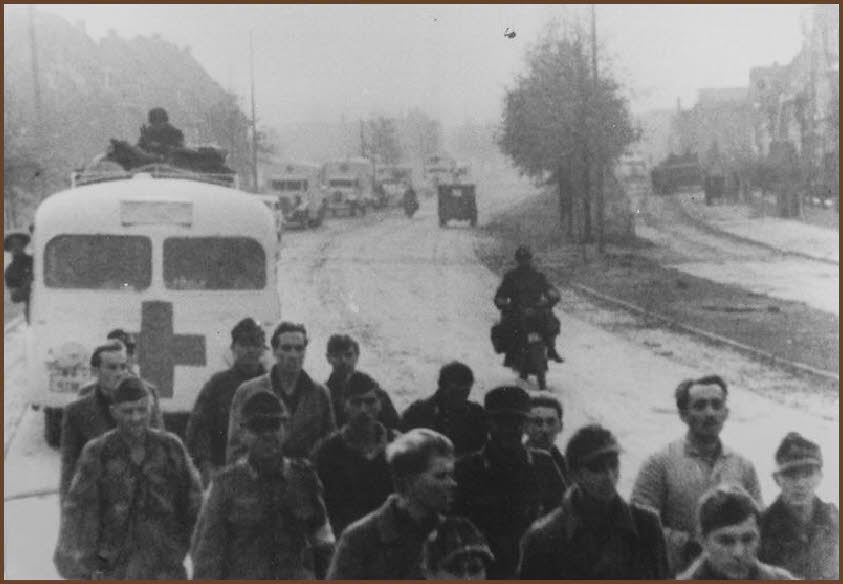 The destroyed ‘s-Hertogenbosch train station and houses along the station square after the final German counterattack on 28 October.

In this picture the Company is marched off behind other German POW and taken to Coudewater In Rosmalen were the British had a large field hospital.

The German documents with the outcome of the battle for 28 October 1944.
(Click on the documents to enlarge) 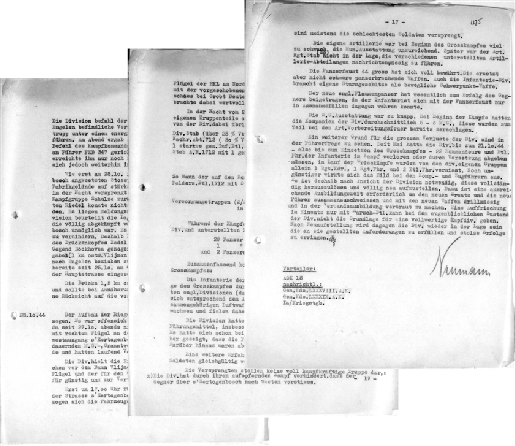 The build-up of the defensive position was accomplished without enemy action. It was apparent that the enemy pulled back some of its forces as no tanks were sighted anymore since the evening of 27.10. The MLR’s right flank was located at the south-west corner of the harbour, at the north-west exit of the city. The here deployed companies were constantly under the attack of Machine Gun, Mortar and Artillery fire and suffered ongoing losses.

The Division held the defensive position at the flooding area’s at thecauseway Vlijmen-Engelen suitable and the ditches in front of the right flank and the for the enemy almost coverless area’s for approach favourable for defence.

The enemy finally tried to cautiously advance with 2 armoured reconnaissance vehicles along the road ‘s-Hertogenbosch-Vlijmen around 17.00 hrs but after the bridge was blown the vehicles pulled back. A shock troop, that was advancing from the MLR’s right flank at the north-west edge of the city with the intent to connect with the forward deployed troops at Groot Deuteren, was able to destroy 2 military utility vehicles at Groot Deuteren and capture and bring back important enemy maps.

The division pull back of own units out of the defensive position west of ‘s-Hertogenbosch followed in the night of 28./29.10. What’s left over of the Division after this is;

20 men from the at the command road positioned Pz.Jg.Kp.712Felders.Btl.1712 with Staff and 3 Companies (the 4th .Company is lacerated in the battle in ‘s-Hertogenbosch)

The division summarizes the following result after the big battle:

The Infantry of our own Division was already defeated during the first day’s of the big battle by two complete and well-equipped British Divisions (of which one Armoured-Div.) While carrying out the orders the Division adequately defended itself. The not organically organized air force-battalions could not consolidate during the battle and because of this fell apart.

Furthermore, it became apparent that after tree big battles the men had become careless.

The scattered troops did not deploy fully battle-hardened men and the worst soldiers where for the greatest part scattered. The Division prevented the enemy to push through over ‘s-Hertogenbosch to the west because of their sacrificing battle.

Our own artillery was much to weak at the beginning of the big battle and the ammunition stock not sufficient. Later on, the Staff of the Artillery Regiment was not in the position to command an lead their Artillery Battalions by use of radio equipment.

The Panzer-Faust 44 proved sufficient though it doesn’t replace the heavy anti-armour shells. Also the Infantry Division needs a sturmgeschutze as a mobile weapon in the point of the attack.

The new British flame-throwing tank greatly contributed to the success of the enemy because the infantry soldier at only some instances could defend himself against this weapon with a Panzer-Faust.

There was a shortage in M.G. equipment. During the beginning of the battle the Divisions Companies only had the use of 5-6 M.G. and were for the greatest part already destroyed during the artillery’s pre-bombardments.

A further cause for the great losses for the Division are to be found in the command. Since May until 21.10.44 and also during the big battle the Div. 22 Commanders and Battalion Officers of the Artillery were either lost in battle or transferred. During the course of the big battle, 1 Regiment Commander, 1 Regiment Officer and 2 Battalion Officers of the divisions own troops were missing. More unfavourable was the situation for the Companies and Platoons. Therefore its necessary for the Division to relieve them and form new ones. Therefore a sufficient buildup period is favourable to let the replacements and officers get used to one another and to let them get used to the new structure and new weapons. A refresh in deploying forces with only march battalions will at this moment, for the state the Division is in, not be a foundation for a full worthy Battle Division. After redeployment of these forces the Division will be in the position again to full fill its obligations and to achieve proud successes again.