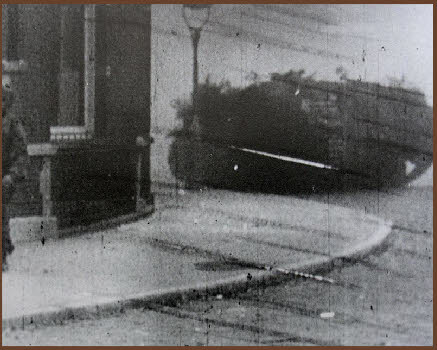 German soldiers and a sturmgeschutz of Oberleutnant Kopke’s Panzer.jager.abteilung 559 near the

‘s-Hertogenbosch train station during the German counterattack on Saturday 27 October. By means of the Bosveldweg the Germans headed for square Stationsplein.

Home
TOC
Previous
Next
The German documents with the outcome of the battle for 27 October 1944.
(Click on the documents to enlarge) 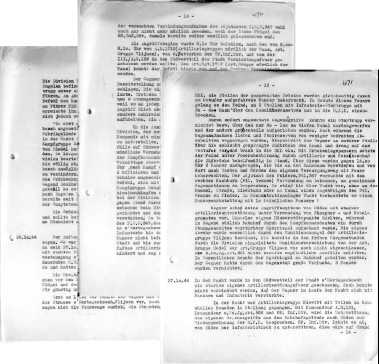 During the night the south-west part of ‘s-Hertogenbosch was subjected to own harassing artillery fire, but this couldn’t prevent the opponent to strengthen himself with tanks and infantry during the course of the night.

Parts of Artillery Group Kiewitt went in to position in the sector south of Heusden during the night. The commander of A.R.191 and the commander of s.Pz.Jg.Abt.559 and 59.Inf.Div have discussed the support for our own counterattackstarting from the train station area to the south to regain the MLR. The 59.Inf.Div refused to give support from the south by means of infantry and based on the communication attempt made by the executive officer of F.E.B.347 the left flank of the 59.Inf.Div would by then already have shifted more to the west anyway.

The start of the attack was ordered for 08.10 hrs after the south-west part of the city would have been subjected to destructive artillery fire from 08.00 hrs until 09.10 hrs by A.R.1712 (artillery group north of the Maas, Art Group Vlijmen) and from 4 Batteries of the 59.Inf.Div and III./A.R.139. This order could onlybe conveyed to Art.Rgt.1712 (Art. Group north of the Maas) by radio.

The enemy realized we were preparing an attack and had the area from where we would deploy destroyed by a heavy concentrated artillery attack. Our own Infantry suffered heavy bloody losses during this attack. Nevertheless, supported by 3 Sturmgeschutzen and 2 Jagdpanthers the Infantry attacked trough two streets into a southern direction to regain the MLR at any price. The attack however was lingered by strong defensive fire whereby in particular the numerous of enemy Pak (Anti-Tank Guns) laying in ambush stopped our push. One Jagdpanther and two Sturmgeschutze were put out of action.

To cover the failure of the Battle Commander the Division ordered the north-west adjacent Battle Group Schulze to immediately put a company with a battle strength of at least 50 men under the command of the Battle Commander. The Artillery kept the order to give harassing fire on to the south-west part of ‘s-Hertogenbosch. After rumours it became apparent on 28.10 that the Battle Commander against all orders already had given orders for a withdrawal in the morning but according to his own statement at 14:30 he had attached himself to the rest of Battle Group Schulze that consisted out of two officers and about 30 men who were still able to fight after the battle for the last row of houses at the canal. He immediately received the order from the Division Commander to fight his way back into the city with the in the meantime provided company of Battle Group Schulze (battle strength 68 men) or else report himself for court martial at the Division. It was promised that he would be provided with a further company of stranglers that in the meantime were cared for by the Divisions Staff and were geared up by the Nat.Soz.Fuhr.Offz. (National Sozialistische Führungs Offiziere: Officers that made propaganda for the National. Socialist. Party.) and were provided with weapons and ammunition by Section. Ib. At this stage there still had to be parts of F.E.B.347Battalion Ewald and remnants of other groups in ‘s-Hertogenbosch. Finally, at 18.00 hrs the enemy broke through with Infantry all the way up to the army barracks west of the blown and for tanks not suitable railway underpass at the south-west exit of the city and all the way up to the sports area at the train station. Because of combined artillery fire the enemy was hindered to get any further and retreated.

The Division ordered Battle Group Schultze to order the company of stranglers, that was accompanied by a strong force of shock troops and were marching on to Engelen, to be commanded by an energetic commander and to report to the Battle Commander. In the evening it appeared that, as ordered by the Battle Commander, also the commander of FEB 347 had pulled out around 16.30 hrs. An order messaged by radio directed to the Commander of FEB 347 that told him to hold out at any cost was only partly received. Some brave groups though continued to stay in the city.

It became apparent after 28.10. that the shock troops deployed at the north-west exit of the city encountered heavy resistance in the factory area. Numerous soldiers returned back to Battle Group Schultze separated during the night because of enemy artillery attacks. There could be told nothing with certainty about the fate of Battle Commander Riedel. There are reports that he was wounded in action. The Division assessed that because of its position and the available battle numb troops the retaking of ‘s-Hertogenbosch was impossible. It was important to prevent the enemy to breakthrough to the west. Therefore the Division had deployed the former troops of bridgehead Hedel, 2 Companies of .Lw.Bodenpersonal (Lw, Luftwaffe, Air Force- Bodenpersonal, ground personnel) precautionary to the area of Bokhoven to occupy a defensive position at the road fork (1km east of Vlijmen) along the causeway leading north-east to Engelen, while 1 Company of FEB 1712 kept occupying the east boundary of Vlijmen frontal positions along both sides of the main road which they already did since 25.10.

The bridge 1,5 km to the east of Vlijmen was prepared for demolition and was to be blown if enemy amour should be approaching without keeping notice with the for safety reasons forwardly deployed troops at Groot-Deuteren.