Though it was apparent that the artillery partly fought a lost battle during close combat with tanks and infantry and the infantry also was defeated, the Division Commander decided to defend his command post and to fulfil his assignment until the end. Only after orders by the General Command the command of the HQ, the remainder of the communications division and the staff of Art.Reg.1712 left the burning remains of Hintham by foot parallel the attacking British around 06.15 hrs on 24-10-44 and organised a new defence in ‘s-Hertogenbosch.

Arriving within 's-Hertogenbosch the Division obtained knowledge that a strong British force had attacked en taken the large road bridge along the main north-south-road passage. The battle commander had already initiated the first steps for the retaking. The General Command had therefore ordered the remaining Sturmgeschutzen of the 2.(sturmgeschutz)Pz.Jg.Abt.256 to support. During their push the British were driven back and many enemy soldiers were brought in as prisoner after the battle.

It now was important to be build a new MLR along the Zuid-Willemsvaart. The forces to our disposal were: Company Zetzman (Company build out of scattered-troops), the Recruit Company of Battalion-Ewald and further added local Companies of the 59th Infantry Division. Furthermore, was to be counted with remainders of Field Battalion 347 around 10.00 hrs who, without being attacked, occupied the defensive position between the canals south-west of Berlicum from 22.10 hrs in the evening. Battle ready sections of 712 Infantry Division were not available during this period. Several little groups were able to retreat whilst fighting. Also 3 artillery pieces and 60-70% of the Artillery Division personnel could partly retreat whilst fighting inclose combat. Orders by the Commanding General of 88 Army Corp to the address of the Battle Commanders explained there also had to be foresight in expanding a second defensive line at the north-south canal that in a later stage could be expanded into an MLR. Also, the west bank of the ‘s-Hertogenbosch-Maas canal (north-west of the city) should be occupied and build in to an MLR. The Division established a collecting point for soldiers. Battalion Wittstock was shifted from Het Gewande passing Empel to the south behind Hedel in the defensive canal position north-west of ‘s-Hertogenbosch. He was again and again provided with all the small detached Divisions Infantry groups that fought their way back to the lines. There was the following section structure:

b) Section Battalion Wittstock from the north-west exit of the city until the canal fork centre north of Engelen.

There were successful shock troop attacks deployed in the part of the city east of the Zuid-Willemsvaart. During this day altogether 2 senior lieutenants and 44 men were brought in as prisoners.

The enemy constantly gave harassing artillery fire and small artillery attacks in the city parts west of the Zuid-Willemsvaart. Moreover, he closed in with strong forces of infantry and armour.

During the day the following artillery was brought back into position:

The remainder of I./A.R.159 and I./A.R.1712 that had shifted north went into position north of the Maas while the compiled battery of II./A.R.1712 went tothe sector Vlijmen.

During the evening the following Artillery reinforcement was ordered:

The difficulty was the command of this Artillery and because the Artillery was positioned north of the Maas the Division decided against the command by the Art.Reg.Stab (Staff of the Artillery Regiment) in Hedel as is normally the practice, but give direct orders to Artillery group Kratzer itself because technical communication problems were to be expected. However, that the Command of the Artillery in its whole failed almost completely in adequate communications was not foreseeable. Though troops were deployed to constructa phone line connection between Division-Art.Rgt. it lasted 25 hours before one was created in the afternoon of 25.10. but was destroyed again 3 hours later because of permanent artillery fire and a connection could only be constructed again after 39 hours by completely redirecting the lines route and changing the command posts location! Thus, the division had to rely on encrypted radio trafficwith the artillery. V.B. accounts (Vorgeschobene artillerie Beobachter, forward artillery observers) could not be sent to the threatened sectors because also they were without communication equipment. Also, the Communication Division could not help out because they possessed no more cable. The few remaining artillery radios -as already was known for weeks- mostly did not function at the decisive moments. Thus, the Division could only give the Infantry’s battle artillery support by giving prearranged artillery fire though the tense ammunition situation of 24. and 25.10. was still complicated though decreased after some time. It became eminent that for the battle not only the number of Batteries and Guns are decisive but that an artillery division fully equipped with observing and communication equipment and abundant ammunition supplies can support the troops far much better than 4 sections that can only give prearranged artillery support after radio requests by the Division. These problems have collaborated decisively in the Battle for ‘s-Hertogenbosch.

At 16.30hrs the Battle commander of ‘s-Hertogenbosch reported that the enemy had crossed the Zuid-Willemsvaart at the south-east exit of the city with a shock troop of about 40-50 men and approached the 59 Infantry Divisions position. The immediate ordered counter attack suffered from the enemy’s tactic at the east bank by a positioned row of firing tanks that prevented our shock troops to come closer.

After orders from the Battle command, that could only dependent on sending runners to the front, the break trough point was closed and a crossing of further enemy forces in the vicinity of the destroyed lock bridge was neutralised.The Division in retrospect believed that the enemy had still reinforced its selfover night. However, from 22.00 hrs the Battle Commander also called, aside its reserves, for: the under the command of the 59.Inf.Div. Btl. Gramse, coming from St.Michielsgestel in a westerly direction, that couldn’t gain a connection with the 59.Inf.Div. and therefore asked for the temporary reestablishment of the  blown bridge at the south edge of the city, to make it possible for Btl.Gramse to cross over. For this a bridge head had to be created. In doing so it was achieved that the whole of Battalion Gramse could cross over including one light battery and one 8,8 cm Flak gun. Following this the bridge was destroyed again.

The preparations made by the Division for a counter attack to take place in the early hours of the morning against the enemy bridgehead in the south-east were ready. The enemy’s brake trough had to be cleared along the south bypass road with support of the, by the Division mandated s.Pz.Jg.Abt.559. The Battle Commander reported to the Division at 07.05 hrs-(25.10.44)-that looking back at the personal Corp order that he received, explaining that the north-south canal now was the MLR and that along the Zuid-Willemsvaart only combat outposts could be deployed, he did not execute a counter attack because the here commanding Sturmgeschutz Commander reported on grounds of reconnaissance reports coming from the area that they were attacked by enemy tanks that were awaiting far away across the other side in covered positions without really being able to help out. The Battle Commander reported that he furthermore could dominate the crossings points flank and that the point where the enemy had broken trough was now firmly closed. This later proved to be not adequate enough as the enemy drove us out by smoking out our corner-basis south of the Zuid-Willemsvaart by frontal attacking withflame throwing tanks and anti-tank guns and able to cross further troops under the protection of heavy artillery fire. At 10.35 hrs the Battle Commander reported that enemy armoured vehicles were reported within the bridgehead.When the enemy shortly after attacked our defensive position with heavy artillery support the Battle Commander decided to create and move in a new defensive position that ran straight through the city. The Division was only notified of these facts after they already had been executed. After the enemy moved in with tanks in its extended bridgehead and used them in his attack, the Battle Commander ordered to retreat from the entire Zuid-Willemsvaart canal defence line that by now was systematically smoked out and cut to the rear by an enemy attack in north-west direction to move in and occupy a new defensive line that ran from about the St.Michielsgestel bridge, across the Markt, straightinto a north-west direction. Around 15.30 hrs the enemy attacked the combat outposts right flank coming over the road from St.Michielsgestel with tanks and infantry and pushed them back under heavy fire. Following this he build a crossing again at the destroyed bridge by using a bridge laying tank, and now rolled in to the city from the south with tanks and vehicles and pushed on determinately into the direction of the north-south canal bridges for an attack. The battle Commander called back the outposts in the MLR on his own initiative at 16.00 hrs and ordered the bridges to be blown. This order was not adequate for 3 of the 4 bridges. At the south most wide bridge however an artillery barrage from 11.00 hrs had damaged the detonate charge and explosives. Every measure taken by the General Command and the Division to re attache new explosives (bombs) were ineffective. therefore, a concentrated anti-tank point was deployed here, because the danger existed that enemy tanks would try to cross the poorly blown bridge.

Sadly, the Staff Battle Commander of ‘s-Hertogenbosch was relieved for another assignment in the evening of 25.10. It later became eminent that the, by Oberst Dewald assigned replacement Major Riedel, an old reserve officer ofthe Luftwaffe, in no way was adequate for this task. The Division on the other hand was not in the position to assign a better energetic leader that could fill in the place of Battle Commander. This person as the new Battle Commander is- as afterthought surveys showed- the main reason of the collapsing of the ‘s-Hertogenbosch front, as this person gave withdrawal orders in contrary to multiple orders and orders in writing, witnessed phone conversations and personal obligations by the Division Commander. After the post office building and with it the amplifier was blown a further commanding problem arose: Since 25.10. in the afternoon the Division, that was without communication radio’s, could only depend on a, at the phone line end point at Grootdeuteren dugout, and exposed heavy field cable that because of the constant ongoing artillery fire could be used only a few minutes a day. Because of this the Division had to rely on frequently send out communication officers. These though often brought important messages much too late. Only after an initiative taken by the General Command during the night of 25./26.10 a troublesome formed communications group could be deployed in support of the Battle Commander.

The enemy brought heavy artillery attacks down on the west part of the city during the night of 25./26.10. This was considered in preparation for  the expected attack to break through to the west. 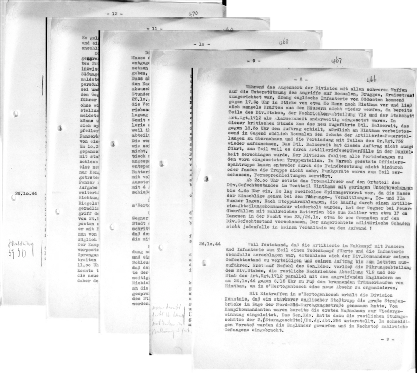 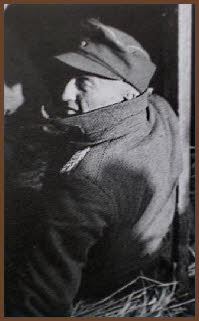 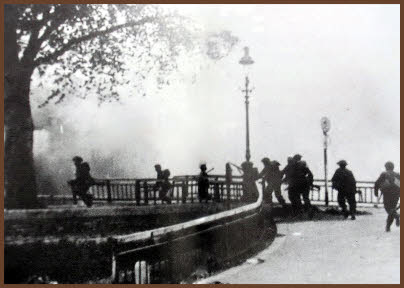 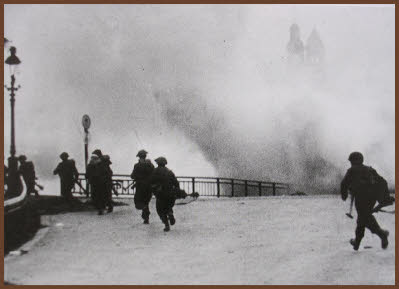 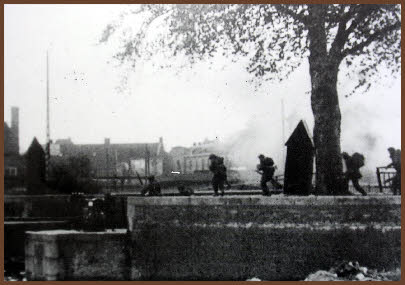 In the afternoon of 24 October men of A Comp. 7th Bat. Royal Welch Fusiliers storm the lock 0 crossing at the Zuid-Willemsvaart in the city to form a bridgehead on the other side of the lock. Later that night a Class 40 bridge would be constructed so tanks and armoured vehicles could cross in to the city.
The German Luftwaffe reserve officer Major Riedel as a prisoner of war. This Officer was ‘s-Hertogenbosch last Battle Commander after he replaced Oberst Dewald who on 25 October took over the command of the frontlines at Zaltbommel. According to these documents Major Riedel was mainly responsible for the fall of the ‘s-Hertogenbosch front.
Home
TOC
Previous
Next