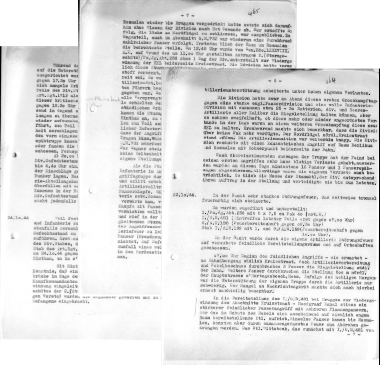 In the night strong harassing fire that at times increased to artillery barrage fire.

Reinforcements that were added where:

During the night our own artillery gave harassing fire on suspected enemy assembly area’s and locations.

07.00 hrs the enemy attack began as expected on the rail crossing south of Kruisstraat. After artillery and fog bombardments 3 tanks broke through the defensive position south of the railway. Further tanks broke through the line 500 m north of the main road ‘s-Hertogenbosch-Hees. As a result of the foggy morning and because of enemy artillery support by own troops proved difficult. Also, here it was noticeable again that the lack of communication equipment was to our disadvantage.

At the position of I./G.R.481 at Bruggen, for the retaking of section Kruisstraat – Hoefgraaf- canal, a battalion moving in a rather narrow area under the protection of the fog suffered a strong enemy tank attack with multiple flame throwing tanks. Several tanks advanced to Rosmalen but could be forced to turn around because of combined fire. Btl.Wittstock together with I./G.R.481 pressed trough from Rosmalen again until Bruggen and, without informing the Division, pressed on until Het Gewande. The result hoped for, closing the gap at the north wing, failed. On the contrary, also a breakthrough of numerous tanks took place again in the area of G.R.732. Nevertheless, the area around Rosmalen remained the most threatened area. At 12.45 hrs 2. (Sturmgeschutz)/Pz.Jg. Abt.256 (Panzer. Jager. Abteilung.256) without 1st platoon was, according to the request of 11.00 hrs made by Gen.Kdo.LXXXVIII.A.K.(General.Command.88. Army.Corp.), deployed at both sides of Kruisstraat for retaking the Main Line of Resistance. The Division had, from own recourses, provided this Sturmgeschutz company with fuel so it could be expected that they soon would be ready to march. The accompanying infantry was provided with 2 VB’s, (Vorgeschobener Artillerie-Beobachter, Forward Artillery Observers) from both the artillery-battalions and the plan of attack was discussed with the involved commanders so a presumption for success was given. These commanders were specially ordered to close all gaps.The south adjacent troops kept to their orders and accompanied into the attack. Because of incomprehensible causes – apparently difficulties during refuelling - the sturmgeschutzen finally arrived around 16.00 hrs at the Divisions defensive position at Hintham, at the time when the batteries of A.R.1712 (Artillery.Regiment.1712) were already at Rosmalen partly involved in to close combat with enemy tanks and infantry. On this dim day there was the danger that the attack, at the beginning of darkness, would not fully develop. During the hours of preparation, the frontline at G.R.732 was broken trough by enemy tanks and infantry troops at multiple places. The opponent was increasing his artillery activity since noon. It was not a rarity that shells 800 t0 1000 shells were shot on single districts ore expected defensive positions.

When our multiple Sturmgeschutzen, accompanied by infantry seated on top of the Sturmgeschutze, approached Rosmalen from the south at 16.30 hrs for the attack, they came under attack from our own artillery by over a 1000 shells and suffered considerable losses. 2 Sturmgeschutzen were putt out of action by direct artillery hits. Heavy tank battles developed around Rosmalen. While half the Sturmgeschutzen accompanied by infantry bypassed Rosmalen to the east-west and progressed forward on to Bruggen, the other half was engaged in a heavy battle with tanks that wanted to destroy our counterattacking west flank. This Sturmgeschutz group came in oppression and called back the infantry accompanied Sturmgeschutzen in the dawning dusk. As a result, the infantry could not continue their attack and also because they suffered significantly under enemy artillery. At Rosmalen a super heavy tank (dreadnought), 1 Sherman-tank and 1 armoured reconnaissance vehicle were destroyed. The Sturmgeschutzen were pulled back to serve as corps reserve as ordered by the Gen.Kdos. (General Command) after a further Sturmgeschutz was put out of action by multiple direct anti-tank hits in the north-west part of ‘s-Hertogenbosch.

While the focus of the division with all the heavy weapons was focused to support the attack on Rosmalen, Bruggen and Kruisstraat around 17.30 hrs, British infantry penetrated at Hintham coming from the southeast numbering about 50, occupied the houses and could not be driven out again because of lack of power as parts of the Div.Stabes (Divisions HQ) the communications- battalion 712 and the Stabsbatt.Art.Rgt.1712 (HQ of Artillery Regiment 1712) were deployed elsewhere as an alarm unit. In this critical stage the newly added Battalion- Balzereit arrived around 18.30 hrs and was assigned to push north along Hintham to take over the protection of the artillery positions in the area around Rosmalen and to resume the communication with parts of Gr.Rgt.732. Btl.Balzereit did not fulfil this order, partly because it was annihilated by artillery fire during darkness. It lacked the Division in communications with the at the front deployed troops. In march send out special reconnaissance patrols couldn’t penetrate, either because they couldn’t get through because of the enemy ore because they just couldn’t find the troops any more. Communication equipment was partly shot to pieces and telephone lines were destroyed.

At 20.00 hrs the enemy artillery barrage started on the location of the Divisions Command post in the west part of Hintham without pausing until 04.40 hrs. There was no doubt this was espionage because the largest part of shells fell precisely on the command-communication-Ic and IIa Bunker. According to stopwatch counts that were hastily repeated by an artillery-battalion commander during the artillery attack, in the night of 23 on 24.10, with a number of batteries, the enemy had fired about 50.000 grenades up to the calibre of 17 cm on the Divisions Command Post. The military damage inflicted is certainly in no relationship to the expenses taken!

The German documents with the outcome of the battle for 23 October 1944.
(Click on the documents to enlarge) 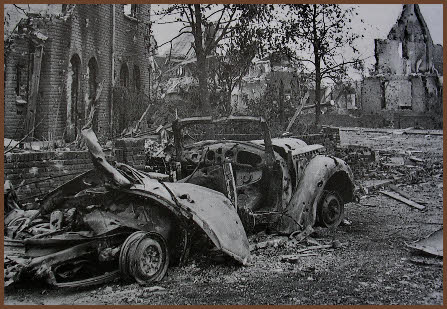 The staff car of Generalleutnant Neumann after heavy artillery fire on the Hinthammerpark and his command post. This artillery attack started on the 23rd at 20.00 hrs and without pausing ended at 04.40 hrs on the 24th.