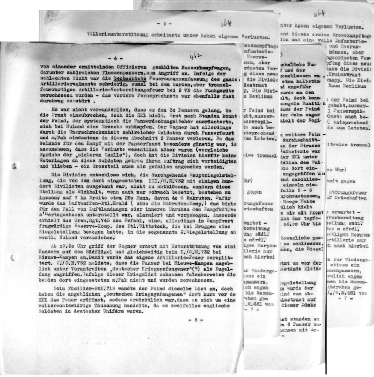 The German documents with the outcome of the battle for 22 October 1944.
(Click on the documents to enlarge)

B. Outcome of the fought battle.

22.10.44 After in the early morning heavy fire was only received in the sector south of G.R.732 (Grenadier Regiment), this heavy fire increased shortly after 06.00 hrs and expanded up to the Div. Command post. The sector of G.R.745 however received no artillery fire which made the Division believe that it could expect a big offensive on both sides of the Zuid-Willemsvaart shortly. At 06.00 hrs after a heavy pre artillery bombardment the enemy advanced along both sides of the road Veghel-Berlicum with 2 companies of infantry and 12 – 15 tanks to attack. The attack was haltered after combined artillery fire from the main line of resistance positioned near the advanced secure boundaries in which also the left side of 59.I.D. Artillery section took part in. The tanks were deployed shortly after.

At 07.10 hrs the enemy advanced over a wider front after a half hour artillery bombardment and attacked the sector of Fusilier-Btl.712 between the road ‘s-Hertogenbosch-Hees and the railway line ‘s-Hertogenbosch-Nijmegen. With about 50 armoured vehicles, amongst them numeral flam throwing tanks they attacked. As a result of the poor visibility, it was difficult to execute a joined artillery attack especially after the tremendous pre-bombardment that damaged the communication equipment – the phone line network in the area was also almost entirely destroyed.

It was not surprising that the 50 armoured vehicles were able to infiltrate the front, but the MLR (Main Line of Resistance) held out. It was only after hours that the enemy was able to, after systematically smoking out dug in anti-tank measures, force a gap in the lines at Nuland. The enemy however lost at least 6 tanks in this sector because of the fearlessness of numerous of soldiers equipped with panzerfaust and medium Pak. Because the battle area was very favourable for usage of the panzerfausts it can be concluded that the losses were probably a lot higher though the division has no proof for this logical assumption seen the loyalty of these soldiers that kept to their assignment and posts and defended themselves – the greatest part though should be considered killed in action.

The Division decided to keep the ongoing buildup of the main resistance line by deploying III./G.R.732 (G.R. Grenadier Regiment) with the use of hundreds of volenteers and not to shrink the number of troops here and not to consider this a position to fall back on, and even when poorly manned to keep this position existing over a 7 km wide front with 250 men, of which 40% recruits. For this Luftwaffe-Btl.Ewald (without the recruit company), situated at ‘s-Hertogenbosch incase of an airborne assault and for the reassurance of the Battle Commander, was alarmed and brought in, and also the Gren.Rgt.745 (Rgt, Regiment) was ordered to let one battle ready reserve company, Btl.Wittstock, that occupied a line of resistance at the hamlet Bruggen, occupy the so-called 2nd line of resistance south-west of Nuland.

At 09.30 hrs the enemy again commenced an attacked on the south wing with support of several tanks and simultaneously attacking I./G.R.732 at Nieuwekampen. During this attack our own artillery was destroyed. I./G.R.732 reported that the tanks at Nieuwekampen were allegedly advancing behind German prisoners of war that were used as shields. As a result of this act, both here deployed medium Pak could not attack the enemy and were put out of action.

At Fusilier-Btl.712 the enemy used the same trick but here the evidently “German prisoners” opened fire just in front of the MLR so it became clear that it was considering a shameful deception of British soldiers in German uniforms.

Around 11.00 hrs the enemy was ready to break out from the gap at Nuland that temporarily was closed again by a counterattack at about 12.00 hrsby the battalions; Btl.Stabes, Fus.Btl.712 and I./Fus.Btl.712. But the enemy broke through after a pre-bombardment lasting about half an hour and attacked with at least 2 Btl. of Infantry and about 40 tanks on both sides along the railway line. The enemy was engaged in bitter fighting at the local defensive positions but it could not be prevented - the artillery was not able anymore to give support by using the desirable loads of ammunition – that the enemy advanced until the defensive position north of the railway and even crossing it. In heroic close combat against enemy armour the Regimental command post G.R.745 held on until the last men.

There were further enemy attacks between 11.00 – 16.00 hrs at multiple places varying from 2 companies up to battalion size, regularly supported by 5 – 8 tanks. In one occasion 3 tanks had broken trough at the street from Veghel to Berlicum with the infantry split in two and heavy casualties inflicted amongst the infantry along the MLR by own defensive fire. At Doornhoek and south of the woods at Hooge Heide a bigger breakthrough had taken place. The here deployed 8,8cm Pak was simultaneous attacked and destroyed by 5 tanks. This part of the MLR is, except from a few still fighting soldiers, apparently totally destroyed. At Nieuwe Kampen the enemy also succeeded  to push through with 5 – 6 tanks until south of the command post of I./G.R.732 so the connection with the in the middle of the woods positioned 1./G.R.732 was cut off. Further north the MRL stayed intact until the edge of the woods 800m south-west of Nuland were the line bend several hundred meters further to the north. Here the brave Fusilier-Btl. lead by Hptm. Siebecker (Hauptmann, Captain) held the line from 23.10 hrs to 04.00 hrs until the order to withdraw was given to the defensive position (new MLR).

It was completely lacking the Div. of counterattack and mobile anti- tank weapons to close the gap in the MLR so the Div. was forced to conclude that the defensive position should be considered now as the MLR.

The Engineers were already deployed during the morning to create roadblocks by the use of fallen trees and booby-traps and other obstacles with the little reserve of mines that was left.

At the railroad crossing 1 km south of Kruisstraat infantry supported by 6 tanks was spotted east west of the defensive position adjacent the woods. One shock troop attack during the night supported by artillery failed with heavy losses to own troops.

Though the Division in the evening was able to fight back this first day of heavy enemy attacks on the defensive position against a strong British Armoured Division with a full Infantry Division counting about 25 – 30 Batteries and divisional and army artillery from every caliber, it was doubted that these more or less unorganized troops were able to hold the new Main Line of Resistance during another day of heavy battle. Sadly, it was noted that the Division was out of Pak. The north flank of the defensive line north of Kruisstraat was open wide. The artillery ammunition is becoming scarce. The Division is expecting a concentrated attack on the area Berlicum and Rosmalen concentrated on both sides of the rail line.

It has become clear that our troops inflicted heavy bloody losses to the enemy after their first attacks and also on this day 15 enemy tanks and an armoured reconnaissance vehicle have been destroyed. Also, our own losses were considerable. The overall mass of the Division battalions kept occupying their positions, they fulfilled their assignments to defend these positions to the last men. 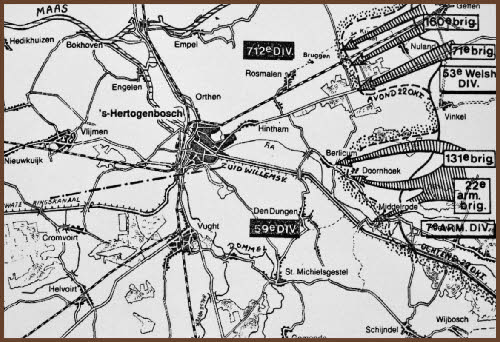