Apparently aware of allied airplanes coming in from the channel on 17 September, two German army trucks appeared in the kerkhovensestraat in the agricultural area Kerkhove, west of Oisterwijk. The two trucks, each towing along a mobile FLAK anti-aircraft cannon, stopped in front of the farm of the Verhoeven family on which 15 German soldiers stepped of the trucks and started to dig large pits for the two FLAK cannons. When they were finished digging the pits the anti-aircraft cannons were brought in to place. Both cannons were FLAK 37mm type cannons which were able to fire 80 rounds a minute ranging up to 4600 meters at ground level and reaching up to 4800 meters high. When the Germans were nearing completion of their work two Allied aircraft suddenly appeared over the area and attacked the not yet camouflaged German anti-aircraft position. The attack was unsuccessful and the two aircraft disappeared. But almost directly four American Thunderbolt aircraft appeared over the area. The four aircraft completed a big half circle and following one after the other approached the German position and subsequently attacked and completely destroy both cannons. Pleased with the result the aircraft disappeared and shortly after German soldiers came on the site to collect their dead and wounded. Their wounded comrades were transported to the German field dressing station in the poirterstraat in the village.  About twenty minutes after the attack the large allied airborne fleet for operation market-Garden appeared on the horizon from the west of Oisterwijk. This fleet was heading for the drop zones at Arnhem and Nijmegen and consisted of two groups, a third group flew across Belgium that day destined for dropzones near Eindhoven. Unable to do anything about it the Germans could only watch how the aircraft passed by low and slow directly over their destroyed FLAK position. The next day however the Germans had moved and camouflaged their FLAK and were ready for action. The Thunderbolts came over again, circled the area in search for German AA positions but flew of again without German FLAK being spotted. Here in after an Allied airborne fleet came over the area again for day two of operation Market-Garden. The German anti-aircraft was now able to come into action and did this with success. 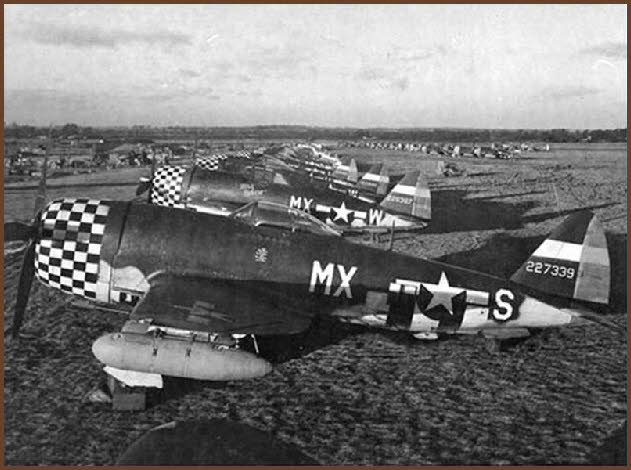 Rows of American P-47 Thunderbolts parked on an airfield in England in 1944.