On 17 September 1944 at 10.20 hours I took off on a Paratroop Drop to be near Schijndel, Holland. The route over the “DZ” was uneventful. The “Drop” was made perfectly, all troopers leaving the plane uninjured. Coming out of the “DZ” near Boxtel, Holland my plane, which was No. 316033, Pilot Donald A. Pahlow, 1st Lt., co-pilot, William F. Baker, 2nd Lt., radio operator, Rollin D. Ellis, S/Sgt; I was the crew chief, passengers being, William Wade, Capt., and Tom Hoge, Cpl, Correspondent; was hit by intense flak and all sorts of small arms fire. The flak hit the rear gas tanks which immediately caught fire. Smoke was suddenly noticed in the cabin of the plane, time was approximately 13.05 hours 17 September 1944. Other planes in our element radioed to bail out as we were on fire.

Within three minutes, Lt Pahlow, the pilot, gave the order to bail out. Capt. Wade had been tied in the ship to steady him while taking pictures of the mission. At the time the plane was first hit, Capt. Wade was released from his steadying position and had all adjustments on to the chute except one leg strap, when I bailed out. I was the fourth man out of the ship and Capt. Wade and Lt. Pahlow were ready to follow me at that time. I was armed with a Thompson Sub-Machine gun. After bailing out, I did not see another chute open from my plane. The plane was in trim and it vanished from my vision. The co-pilot, radio operator and the correspondent and I landed uninjured near Oirschot, Holland. That night I was by myself. I located S/Sgt Ellis trough the underground, about 09.00 hours 18 September 1944. We stayed together that day and until the following Friday, 22 September 1944.

We hid in a place that was once a pig pen. It was well hidden. Late in the evening on 19 September 1944 about 30 German soldiers came to the farm house, about 25 feet from our hiding. They stayed there all night. On 20 September 1944 Cpl. Hoge was send to this house and walked into the hands of the enemy billeted there. There was no gun fire and he was taken prisoner. This was told me by a civilian who had talked to Cpl. Hoge after he was made a prisoner. On 22 September 1944 late in the evening, we located Lt. Baker’s whereabouts trough the underground. That night we three got together and moved through the woods to a straw shack where we stayed hidden from the enemy for ten days. Black bread and potatoes were given us by farmers. On 2 October 1944 the Germans began closing in so we had to leave our hiding place and find another. Moving at night, we found our second straw shack about 5 miles from our first. It was deeper in the woods. We stayed in this place for eleven day’s. Bread and potatoes were again, sparingly, supplied. We purified most of our own drinking water.

The Germans began patrolling a bridge near us, and getting ready to blow it up. This would make contact with farmers impossible so we were compelled to take another move. This time we moved near a farmhouse a short distance away. We stayed here for seven days and were able to contact area farmers during this period. Again the Germans moved all area civilians and we were forced to move. This was on 20 October 1944. We were dressed in civilian clothes, given to us by the farmers we had come in contact with. We went from this point in daylight to Moergestel, by way of the main road to Tilburg. Lt. Baker and S/Sgt. Ellis were going to swim the canal, and as I couldn’t swim, farmers were taking me to locate the underground so I could use other means of escape. We encountered German soldiers all along this road but we were not picket up or questioned. Reaching the underground, I received a complete change of clothes. The information received from the underground at Moergestel revealed that the canal was too well guarded to attempt swimming.

The farmers went back to where Lt. Baker and S/Sgt. Ellis were and brought them to the farmers house where I was, and were also given a complete change of clothes. We remained there all night, and learned that there were about 100 British and American Airborne troops hidden in the woods about 5 miles from this house. We left on 21 October 1944 with the aid of the underground, to join the British and American Airborne men hidden in the woods. We stood with them until 24 October 1944 when all of us, well-armed, went with five Germans, deserters, who were aiding us to reach Boxtel. The British tanks moved into Boxtel before we arrived that night. The tanks then moved out and we occupied the town. That night the underground contacted the British, and we went to their command post the following morning. We turned our ten German prisoners over to the British in Boxtel. We were evacuated by truck on 24 October 1944 at 12.00 hours, to Eindhoven.

That night the British gave us transportation to Brussels. I was interrogated at Brussels by a RAF Flt/Lt. American eyewitnesses of the downing of C-47, 43-16033 saw the plane go down about one and a half minute after the return flight from Market-Garden drop-zone A-4. It was set on fire by enemy Flak near Boxtel. The aircraft on fire crashed approximately 10 miles south of the “DZ” in Oostelbeers at de Maneschijn around 13.05 hrs on 17 September 1944. Before the aircraft crashed, four or five men were able to bail out of which one chute didn’t open. Another one had a streamer and fell to his dead.

C-47A-90-DL “Skytrain” C/N 20499 S/N 43-16033 (CU-B) was operating that 17 September from Aldermaston Airfield, England also known as USAAF Station 467. The aircraft was from the 72nd Troop Carrier Squadron, 434th Troop Carrier Group. Their mission was a Paratroop Drop on Drop-Zone A-4 near Veghel. The Airborne troops were 1st battalion, 501st PIR, 101st Airborne Division.

Crew members onboard this C-47 were:

Pilot Donald A. Pahlow and William F. Wade were buried on the Oostelbeers churchyard after the crash and later were relocated to the American military cemetery in Margraten. 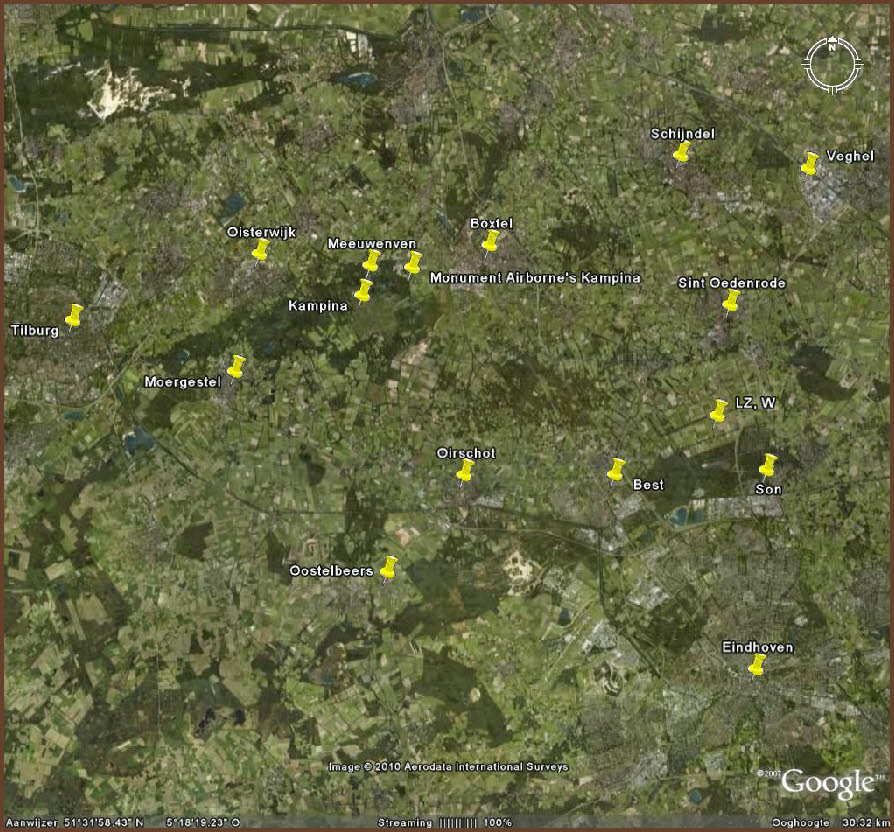