The battalion moved to Fort Bragg in North Carolina with the 101st Airborne Division on September 29 1942. Here the battalion participated in all 101st division exercises and manoeuvres.

After deployed to England on September 5 1943 on the HMS Samaria the 326th AEB arrived in Liverpool in England. After this long voyage the battalion moved by train to Basildon Park near Reading in Berkshire. Under the command of Lt Col. John Pappas the battalion started training in firing weapons, glider loading, glider flights and tactical exercises.

The 326th AEB participated in the airborne assault into Normandy where Lt Col John Pappas was killed in action on June 13 1944. Major Hugh A Mozley assumed command and led the battalion during operation Market-Garden and at Bastogne.

The 326th Airborne Engineer Battalion was deactivated in Germany on 30 November 1945.

2 Presidential Distinguished Unit Citations for operations in Normandy and Bastogne.

War Cross with palms for operations in Normandy.

2 War Cross and Lanyard for the Bastogne operation.

The 326th was added to the National Army on july 23 1918 as an element of 101st Division but was already demobilized on December 11 that same year. It was reconstituted on june 24, 1921 as 326th Engineers (Combat), an element of the 101st Division and trained at Milwaukee in Wisconsin.

on August 15 1942 they were redesignated as the 326th Airborne Engineer Battalion (AEB) and were activated at Camp Clairborne in Louisiana.

The Engineers of the 326th where for most part divided into other units. For instance for D-Day when platoons of Charlie Company jumped together with troops of the 501st, 502nd and 506th PIR. Their mission mainly consisted of blowing bridges to delay German counter attacks. The Airborne Engineers where experts in bowing up things, they could build thing but also knew exactly how-to blow-up things. Some Airborne Engineers came in by glider together with a mini bulldozer that was needed to clear the landing zones of ‘Rommel asparagus’ (dug in wooden poles by the Germans). The rest of the Airborne Engineers landed on the beaches by troopship.

During the German offensive in the Ardennes the 326th fought as an entire unit and was assigned to a sector in the southern defending zone of Bastogne. They were not only the first in but also the first to meet up with General Pattons tanks when they ended the encirclement of Bastogne. In Bastogne the 326th AEB suffered their biggest casualty rate and lots of the men were killed.

This monument in Normandy, France is dedicated to the Filthy Thirteen and was erected on June 6 2008. Filthy Thirteen was a demolish platoon as part of 506th Parachute Infantry Regiment, 101st Airborne Division with soldiers of the 326th AEB. This outfit was the elite part and the men were trained for complex assignments. In the night of June 5/6 they were dropped above their drop zone, assigned to destroy the bridge over the Douve river. This mission eventually cost the lives of most of the men of this unit. 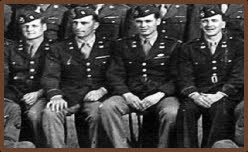 The men of Baker company/326th Airborne Engineer Battalion/101st Airborne Division. The photos are from May 1944 and shot at Basildon Park in England. These photo’s also show the men who flew in the Waco glider Queen-City. The photo in the middle shows Baker company’s officers. Not one of these officers survived the war.

From left to right: 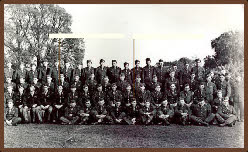 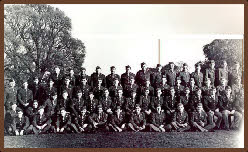