Doctor Desain and pastor van Kemenade were able to contact troops of the 15th Scottish Division who had a commandpost on the ‘Hondsberg’ grounds in the Oisterwijk woods during the night of 25/26 October. The 15th Scottish Division had been resting and rearming in Helmond during the month of October. On the 20th the division started an operation to break out of the corridor in to the west. Under codename ‘Pheasant’ they started an advance from Best to liberate the city of Tilburg by means Oirschot. After the town of Oirschot was reached on the 24th the Scots advanced on to Moergestel which they liberated on 25 October. From here the plan was to advance on to Tilburg by two routes. One route would lead them straight to the eastern part city, the other route led to Oisterwijk. After the village would be liberated the troops would advance to Tilburg via Berkel Enschot.

The 2nd Glasgow Highlanders followed the road from Moergestel to Tilburg supported by tanks of the Scots Guards. After they had reached a monastery a few miles west of Moergestel they dug in for the night. However, when they were almost settled, they heard the sounds of mortar and machine gun fire coming from the direction of Oisterwijk. At that time the 7th Seaforth Hihglanders were fighting the Germans at the southern outskirts of Oisterwijk. The 7th Seaforth Hihglanders where send from Moergestel to Oisterwijk earlier that evening supported by a group of Churchill tanks. They were tasked to advance to Oisterwijk, take the town and bridges across the stream Voortse Stroom and push through to the eastern outskirts of Tilburg.

When they reached Oisterwijk they were attacked by a German force that had created a defensive line behind the stream and the advance of the Seaforths was haltered. The road from Moergestel to Oisterwijk was blocked with trees and the bridge across the Voorste Stroom appeared to be destroyed. Soon heavy fighting took place which resulted in several Scots getting severely wounded. The stiff German resistance gave the Scots the impression that the Germans would do everything to defend Oisterwijk and they believed the village to be evacuated of its civilian population. Meanwhile the tanks of the Scots Guards that were dug in at the monastery west of Moergestel were called away at 20.00 hrs and send to Oisterwijk to support the assault of the 7th Seaforth Hihglanders.

Around one o’ clock that night Dokter Desain was called upon by pastor van Kemenade to treat a wounded civilian that appeared to have be found wounded somewhere along the road moergestelseweg. The pastor decided to accompany the doctor for security reasons and the two left into the direction of the moergestelseweg by taking a small footbridge behind the Catharinenberg convent. This small bridge wasn’t destroyed by the Germans and could be crossed by them very easily. The two men, not familiar with the situation on the other side of the stream, crossed the bridge and the convents yard, went through a gate and reached the Moergestelseweg. In pitch darkness they then stumbled upon a tank from the Scots Guards together with its crew and a wounded civilian. The tank commander ordered both men to identify themselves which they did and they explain their intentions. They told the commander that they had come to get the wounded civilian to treat his wounds. They also told how they had been able to leave the village and cross the river to reach the road. The tank commander was surprised with this unexpected valuable information about the small intact footbridge. He ordered both men to accompany him to their command post at the ‘Hondsberg grounds’ were Lieutenant-Colonel Campbel, commander of the 2nd Glasgow Highlanders and Lieutenant-Colonel Hunt, commander of the 7th Seaforth Highlanders were planning their assault on Oisterwijk.

When the men arrived at the command post the doctor soon showed the two commanders a little hand drawn map and his notes that he had made earlier about German positions, their armament and their troop strength. He told them that there were about 200 Germans in Oisterwijk. The commanders were further told the Oisterwijk population was not evacuated and that many civilians from surrounding villages had found refuges in the village. About 5000 refugees had taken shelter in Oisterwijk since operation Market-Garden had started and together with the Oisterwijk population this meant that the town now counted over 13000 people.

Earlier that evening, during the last ‘O’ group meeting at 22.00 hrs Lieutenant-Colonel Hunt had made up his plan for attack with his latest information that was gathered after extensive patrols by his men. The doctor and the pastor told the Lieutenant-Colonel about another two possibilities to enter the village. There were still two intact bridges over the stream Voortse Stroom. One was the small footbridge that themselves had used themselves had used and which was situated about one hundred yards east of the destroyed bridge at the Catharinenberg convent. The other bridge was a small road bridge that could only handle light armoured vehicles. This bridge was situated near the road gemullehoekenweg, one mile east of the road bridge at the convent.

With the words ‘that’s going to change our plans a little bit’ Lieutenant-Colonel Hunt immediately changed his tactics for the assault on Oisterwijk. He gave new orders to his artillery, that had its guns set up at street Waldemarlaan, and his infantry troops for the assault on the village. These last-minute changes prevented a heavy artillery barrage on Oisterwijk and saved the village from heavy destruction. Because the doctor and the pastor provided this valuable information to the Scots, the saviour of Oisterwijk is to be thanked to these two men.

Lieutenant-Colonel Hunt suggested to cross the two bridges early in the morning with one rifle company each supported by a group of vehicles and tanks from the Scots Guards. His intentions were to make a small bridgehead between the river and the railroad in the village, so to cover the engineers that would have to build a "class-40" Bailey bridge. After this bridge would be in place heavy tanks could cross the Voorste Stroom and enter Oisterwijk. The doctor and the pastor were then ordered to stay in the Scottish camp for the night and were not allowed to return to Oisterwijk. About that time their patient was already on transport for treatment in Eindhoven, so the two men stayed in the safe consignment of the camp as the two first free Oisterwijk residents. 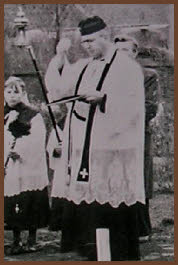 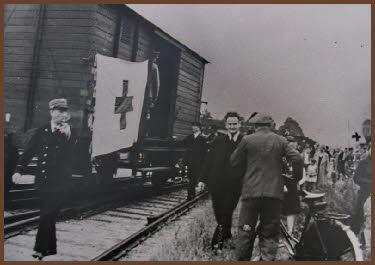 Doctor Desain during a red cross exercise in Oisterwijk in 1938.
Pastor van Kemenade 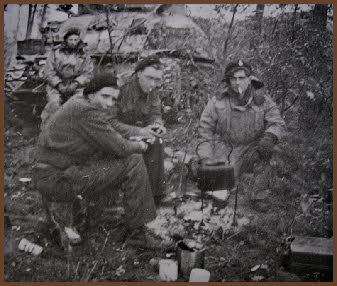 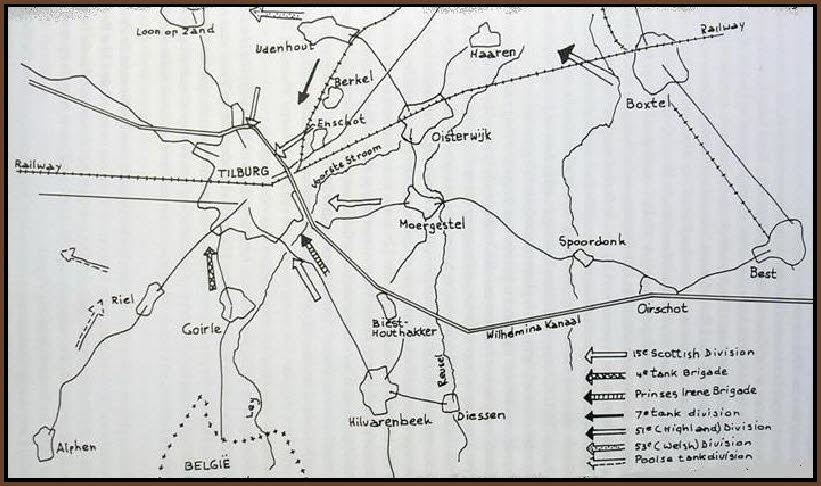 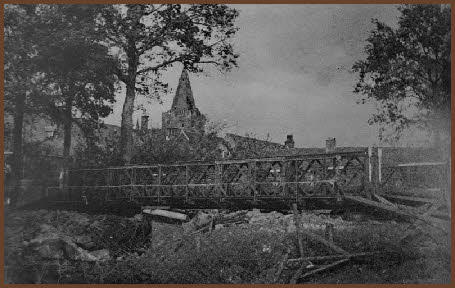 The situation of Allied forces around Oisterwijk during the end of October 1944.
A Scottich Sherman tank crew during a thee brake before the assault on Oisterwijk somewhere in the Oisterwijk woods.
The "class-40"- Bailey bridge over the Voortse Stroom.
Home
TOC
Previous
Next